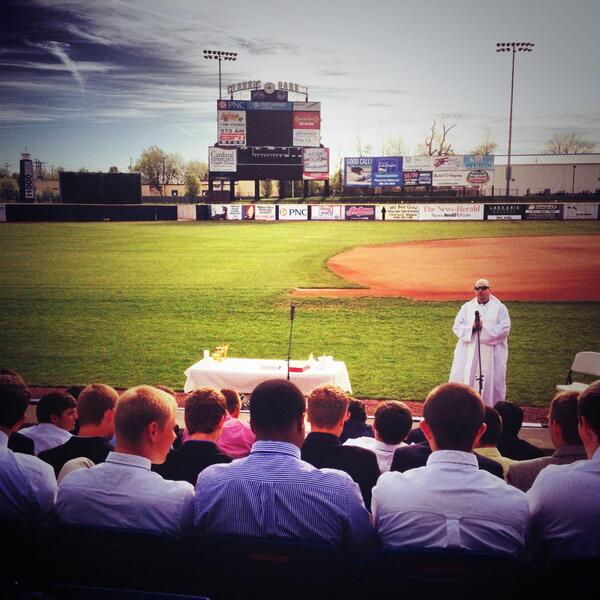 The four teams gathered for Sunday mass led by Father Bill Murphy. This is what it’s all about. AMDG

EASTLAKE – Saint Ignatius, Saint John, Walsh Jesuit, and Saint Xavier began a tournament that is held special to all four schools in their respective baseball seasons. On the first weekend of May, the four convene every year for the Ohio Jesuit Tournament. With not even two weeks before playoff time remaining, the tournament is a great test for all four squads. Riding an 8-game winning streak coming into the tournament, Coach Brad Ganor and Saint Ignatius were more than ready for play to begin.

Game 1: Trailing 4-0 heading into the bottom of the 7th, it would take magic for Saint Ignatius. In one of the great games in Ohio Jesuit Tournament history and regular season OHSAA history, the ‘Cats came back to rally and topple the Walsh Jesuit Warriors, 5-4. After Quillen Austria hit a game-tying double in which the possible game-winning runner, Bennett Kinzel, was thrown out at the plate, Saint Ignatius’ big 1st baseman, Joe Khoury, ripped a walk-off frozen rope into right field. A mob scene at first base followed, as a game that was 0-0 heading into the 7th took a wild turn to get the tournament started. It was Saint Ignatius’ first Ohio Jesuit tournament win since 2010, and what a triumph it was!

Game 2: Walsh Jesuit answered from the opening loss with a 3-2 win in a pitcher’s duel to edge Saint John Jesuit.

Game 4: Saint Ignatius and Saint Xavier finished the day with the primetime affair under the ClassicPark lights. Both teams came in at 1-0 on the tournament. Matt Lynch, the Wildcats’ starter, struggled early. The Bombers put up four runs in the first and took control early. Throughout the night at ClassicPark, the ‘Cats did have chances though.

Despite the rallying attempts, the Bombers wore away the Wildcats’ 9-game winning streak with a 6-3 victory. Insurance runs along the way for the team from Cincinnati powered them by the team from Ohio City.

Two games are on tap today to conclude the tournament play. Saint Ignatius will take on Saint John Jesuit, as both squads are looking to bounce back at 12:30 pm at ClassicPark. The Saint Ignatius Broadcast Network has coverage with live video. Walsh Jesuit plays host to Saint Xavier at 12:30 pm.

Saint Ignatius will receive their Strongsville District draw this Sunday afternoon, as the ‘Cats will see where they stand for postseason play.

Tune in this afternoon! Send me your tweets @JohnFanta13 and e-mail at jfanta13@student.ignatius.edu.