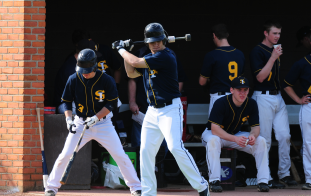 A tough schedule will challenge the Wildcats this spring, as Coach Brad Ganor could not be more excited for Opening Day on April 1st. The Wildcats come off of a regional semifinal loss to Westlake last season. Saint Ignatius has the leaders in Dan Rowbottom and Conor Hennessey, and the athleticism in plenty of juniors.

The Wildcats did go through a switch from aluminum to wooden bats last season. From the players’ feedback, they will use the OHSAA legal aluminum sticks this spring.

When talking to Coach Ganor (170-59 at Saint Ignatius) about what he was excited about for the 2013 season, he said, “I want to see the sun out when April 1st comes around on Opening Day against Youngstown Boardman. This team has so much potential, and April 1st could not come soon enough. I keep saying this too people, but this team reminds me of the one in 2009.” Coach Ganor is referring to a team that made a run all the way to the State Final Four. The Wildcats are filled with quite a bit of leadership and depth for the spring. It all starts with the first two captains for the ‘Cats, who were named last spring at the 2012 banquet.

Conor Hennessey, the Saint Ignatius Offensive Player of the Year in 2012, will hit lead off again in 2013. With a .352 average, six doubles and two triples last spring, Hennessey shows his quickness as a receiver on the football field on the base paths as well. The senior center fielder is quite aggressive, as he says, “Standing near the top of the plate is what I love to do. I really like the look of our team. Can’t wait.”

Second baseman Dan Rowbottom, who is recruited by Illinois, hit .313 with nine doubles, three triples, and the Wildcats’ only home run (with the wooden bats) in 2012. Dan was a Sun News All-Star in 2012, and looks to keep on surging in 2013 before he heads off to Illinois. “This team gets me really excited because we have such a special chemistry. I am very pumped to get everything going.”

The Wildcats’ third captain, Kyle Pluta, talked about the pitching staff and what he most anticipates this spring. “This is a very competitive staff. There is such a great attitude, as I feel like any one of us can perform when called upon. Knowing your role is so important,” Pluta said.

The staff is led by lefty ace Tom Rolle, who will be heading to Ashland University next year. Kyle Pluta will be a starter this spring for the ‘Cats as well. Full of heat, senior Matt Lynch will tow the rubber, along with lefty Nick Margevicius, who was excellent at the JV level last year.

The staff’s depth is showed through the extra contributors, as junior (Miami of Ohio recruit) Nick Longo will close. Two other juniors who will add to the staff are Shane Skuhrovec and Nick Fabian. “Everybody must know their role and stay focused. As I said to the guys, ‘When your name is called, be ready.’ That’s what needs to happen. These guys pitched significant innings and the JV players got to play at nice venues to experience what being a varsity player would be like,” said Coach.

Another headline for the spring is the shortstop position, as senior captain Tyler Finkler will move there from third base to take over the middle infield with Dan Rowbottom. Finkler has a skillful glove and a strong bat in Finkler, who is right-handed.

“I am comfortable with us defensively. Our line-up, from top to bottom, is loaded. That’s where my job isn’t easy, as decisions come tough for where to put everybody. I love our outfield. They are excellently quick,” said Ganor. Nick Fabian, Conor Hennessey, Nick Longo, Kyle Daugenti, and Shane Skuhrovec will fill out the outfield.

Another big question this year is the catcher position. Getting a big opportunity is junior left-hander Pat Gulick. Gulick has a strong bat and is pumped for the spring. “I’m loving this opportunity,” said Gulick. Seniors Kevin Hagen and Jagger Bruck will be the other two catchers for the ‘Cats.

At first base, Joe Khoury will potentially start, but Bennett Kinzel is right behind him also. Cole Nieto will start at third base for the Wildcats.

Looking at the Schedule- The Wildcats begin during Saint Ignatius High School’s Easter break. On April 1st, the ‘Cats open up at Youngstown Boardman. After playing at Amherst Steele on April 3rd, the ‘Cats travel to Columbus Chillicothe for a doubleheader with Bishop Watterson and Grove City. The following day, they play a doubleheader at Dublin. On April 10th, the Wildcats open up at their new home field, Classic Park (home of the Lake County Captains), to play Nordonia. On April 26, the Wildcats meet Avon Lake at Progressive Field under the lights (First pitch: 8 pm). Freshman, JV, and Varsity match-ups between Saint Ignatius and St. Edward take place on May 11 at the Wildcats’ other home place, Baldwin Wallace. The Ohio Jesuit Tournament is May 4-5 at Classic Park, featuring Saint Ignatius, Walsh Jesuit, Saint Xavier, and Toledo Saint John.

After falling in the Regional Semifinals last year, the sky is the limit for the Wildcats. Get ready for one exciting spring.

The official home of Saint Ignatius Baseball and all Saint Ignatius spring sports is the Saint Ignatius Broadcasting Network. Weather permitting, the SIBN has coverage of over 20 games during the regular season and we will carry each playoff game.

I’ll be on the play-by-play call with a cast of thousands this spring. Go to Ignatius.edu/sibn for our complete schedule.