ST. XAVIER (7-2) WRAPS UP A PLAYOFF SPOT IN DIVISION I, REGION 4 AND RINGS THE FIRST CANNON BELL IN THE STORIED JESUIT SCHOOL RIVALRY.  THE WILDCATS (7-2) HAVE TO PUT THE LOSS BEHIND THEM AND FOCUS ON ST. EDWARD, A GAME THAT WILL HAVE A HUGE IMPACT ON THE ‘CATS’ PLAYOFF POSITIONING.

In his 29 seasons as the head football coach at Saint Ignatius High School, Chuck Kyle ’69 has seen it all when it comes to dramatic endings or strange plays.

In fact, in the days leading up to Saturday’s annual showdown with Cincinnati St. Xavier, Coach Kyle spoke several times about the one, two or three big plays that always seem to decide the outcome between the Wildcats and the Bombers.

Simply put, big plays are nothing new to either tradition-rich Jesuit School program. 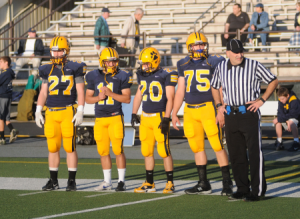 But what happened in the final seconds of St. Xavier’s 14-12 victory at John Carroll University on this blue-gray sky and sunshine “