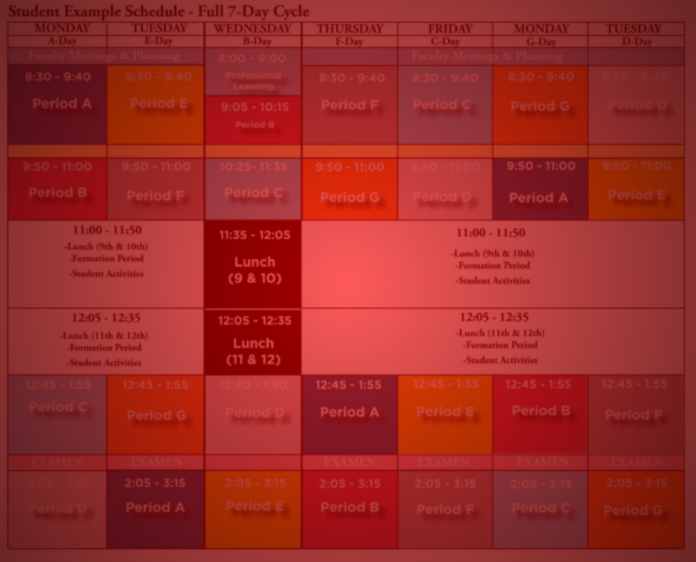 I’m sure the administration looked at several ways to organize our days when they decided to move away from the nine period day, but the schedule they chose is inadequate. I can’t say I hate the new schedule, hate is a too strong a word. But I very much wish it was different.

The obvious flaw with the new schedule is that it is difficult to know what classes are at what time since it changes every day⁠—a system known as the serpentine. I’ve actually gone to the wrong classroom at the wrong time twice already. Maybe I’m just stupid, but I’d be willing to bet I’m not the only one. Depending how far that puts you from the right class, you could still be late even with the ten minute class change. I’ve been going to the school for three years and I still managed to mess this up. I can’t even imagine how hard it must be for the freshman, and even for the sophomores who haven’t had a “normal” semester at Ignatius.

I liked having the same classes at the same time each day. It felt like there was more structure to the day that way. It’s human nature to like structure; no society can function well under anarchy, even our campus society. Last year I had math first period, and I suck at math, but I still preferred having that to count on to start off every day. Everyone has that one class that they find difficult, or they just don’t like. It used to be that you could tell yourself: “If I can just get through that class, then the rest of the day will be better.” Now, you don’t get that feeling of a little accomplishment each day that you made it. That terrible class can jump up and get you at any random time during the day.

The schedule makes planning for things after school unnecessarily difficult. During the A-B schedules last year, two days a week I had a block of classes that was a little lighter in terms of homework and time. I understand the nine period day is probably gone for good, but there are other ways to do four period days. If every Monday was the same, and every Tuesday was the same, and so on, somewhere in the week there would be lighter days. When you want to volunteer somewhere after school, or if you have a job, planning your hours for those lighter work nights really helped. If you were scheduled on a heavy night, at least you knew you could catch up the next night. Now you can never tell what your night is going to look like.

The one thing I think everyone loves about this new schedule is that clubs can meet at lunch. It was really hard for kids who played sports to be able to join things when all the clubs met at the end of the day, so this is a big improvement. I have noticed attendance is rising in the clubs I belong to. The only flaw is the mandatory advisory period. I really like my advisor and the kids that I’m with, but we’re six weeks into the year and I’ve had to leave a club meeting early on both days every week to go to advisory. On the days I don’t have to leave, the meetings I could stay for still had to stop halfway through because a bunch of other kids had to go to advisory. It kind of defeats the point of having a common period for extracurriculars if a mandatory class is taking out half of it.

I’m a junior and this is my fifth schedule in three years. We had nine periods, then online, then half days, then four periods every other day, and now this. I’m not advocating for a sixth schedule, just a few tweaks to this one. Maybe drop the serpentine and look at options with more consistent structure. Maybe rework the advisory to be at a different time in the day, or just one day a week where everyone has it at the same time so we aren’t missing things. Just a little consistency would be great.