In keeping with school tradition, the student-led publication of Saint Ignatius High School hosted a mock election for students to participate in this fall. Lasting from Tuesday to Friday on the week before Election Day in America, the mock election gave students the opportunity to make their voices heard. While in past years

, mock elections have been conducted with in-person voting in places such as the cafeteria, this year students cast their ballots using a secure Google Form which was emailed to all students twice throughout the voting period. The Eye also hung posters around campus with QR codes linking to their online ballot.

578 total votes were cast in this mock election, more votes than the 394 cast in 2012, the 461 votes cast in the 2016 primary, and the 316 votes cast in the 2020 primary which concluded on the last day of in-person learning last spring prior to the first COVID shutdown. In addition to being a fun school tradition, the mock election reveals much about not only the views of current Saint Ignatius High school students, but trends over the years, possible outcomes of the actual elections, and more. As The Eye’s team continues to process the results, additional discoveries will continue to be shared with readers in future features. This article will mainly feature the results and their implications for the actual election tomorrow.

The only race that will appear on the ballot across the entire state of Ohio this November, other than the presidential election, are two races for the Ohio Supreme Court. The Supreme Court of the State of Ohio is the highest court in the state, with final authority over interpretations of Ohio law and the Ohio Constitution. The court has seven members, a chief justice and six associate justices, each serving six-year terms.

This fall, two seats will be decided upon by Ohio voters. In the mock election’s first incredibly close Ohio Supreme Court race, four votes made the difference for Republican Candidate Sharon L. Kennedy who bested Democratic Candidate John P. O’Donnell with 183 votes to 179 vote, a 1.0% margin. Additionally, in the even closer second Ohio Supreme Court race, Republican Candidate Judi French bested Democratic Candidate Jennifer Brunner with 180 votes to 178 votes, a two vote, 0.6% margin. In both of these races, in accordance with the official Ohio ballot, party affiliation didn’t appear next to the candidates’ names, which all but certainly was a key factor in how close the results were.

Along with the Ohio Supreme Court, this year students voted on various Congressional races based on which District they reside in. Here are those results:

The Congressional races were all but a clean sweep for Republicans with incumbent Marcia Fudge being the only Democrat to win. If all of the votes in all of these individual races are tallied, the Republican candidates collectively beat the Democratic candidates by 233 votes to 188 votes, a 32.7% margin.

Four years ago, Saint Ignatius students picked Donald Trump to be the next president of the United States over former Secretary of State Hillary Clinton by a 30.4% margin. The electoral college followed suit and Donald Trump was sworn in as the 45th president. After four years of Donald Trump’s presidency, Saint Ignatius has voted again, this time with an entirely new student body deciding whether to reelect President Trump or elect one of his challengers.

Joe Biden, former Vice President and Senator from Delaware won the nomination of the Democratic Party, beating Sen. Bernie Sanders and a pack of more than 20 other candidates. In that primary election, Saint Ignatius students voting in the Democratic primary chose Sanders over Biden by a mere two votes. Yet after winning the nomination, Sanders quickly endorsed Biden and has been working to get him elected ever since to the relief of some and the chagrin of others. Other presidential candidates set to appear on the Ohio ballot, who have been largely ignored throughout the campaign, include Howie Hawkins of the Green Party and Jo Jorgensen of the Libertarian Party. Also included on the mock election ballot was an option to cast a vote for a write-in candidate.

The results of the presidential election are as follows:

In second place, with 188 votes, 32.5% of the total votes, 20 zip codes, the majority of independent voters, and the majority of seniors registered to vote, the runner up in this mock election: Democratic Party candidate Joe Biden.

In first place, the winner who carried all four classes of students, and prevailed in more than 40 zip codes, with 330 votes, 57.1% of the total vote cast: the incumbent Republican Party candidate Donald Trump. 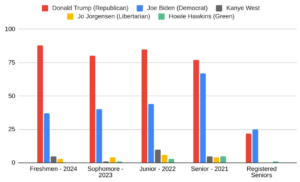 When the results are broken down by class, the trend that has been noticed in every presidential mock election starting in 2012 clearly held true in 2020. The freshman class were the most conservative voters and the seniors were the most liberal. There are various theories behind why this trend has always held true including that as students grow they begin making more judgements for themselves, as opposed to deferring to their parents. Another theory is that an education at Saint Ignatius gradually makes students less conservative politically.

Yet the results by class are not entirely positive for the president. Registered seniors, the students actually casting votes in this election, voted for Biden over Trump by 25 votes to 22 votes. If Trump was unable to win registered seniors in a predominantly white, upper-middle class, all-male school, he may not be on track to win in Ohio as a first glance at the results may lead one to believe. 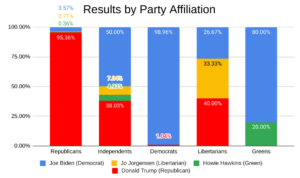 The results broken down by party affiliation reveal more about the probable outcomes of the presidential election in the state of Ohio. While the Republican vote predictably went overwhelmingly in favor of Trump, 10 Republicans or about 3.6% did vote for Biden. This is a sign that a select group never-Trump Republican voter does continue to exist. It is possible that the president’s constant attempts to appeal to the conservative base or his coronavirus response may be alienating more moderate Republicans. It is also possible that these voters are unable to support Trump because they see him as morally-unfit or lacking in the character needed to be president, but they still consider themselves Republicans.

Half of Independent voters picked Biden while 38% chose Trump. Additionally, only one Democrat voted for Trump in the entire election. 40% of Libertarians picked Trump over their own party’s candidate, Jo Jorgenson and an astounding 80% of Green Party members favored Biden over their own candidate, Howie Hawkins.

Here are our additional maps, charts, and graphs (will populate throughout the day): 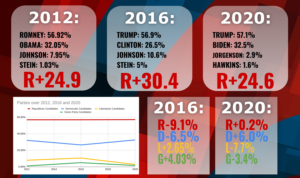 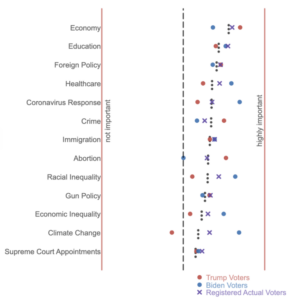 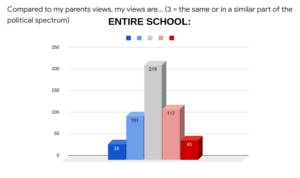 As The Eye continues to process the results, we will continue to publish more content breaking it all down for our readers. Until then, thank you for reading this article and thank you to all the students who voted in the mock election. Thank you for caring about the future of our nation and our world.