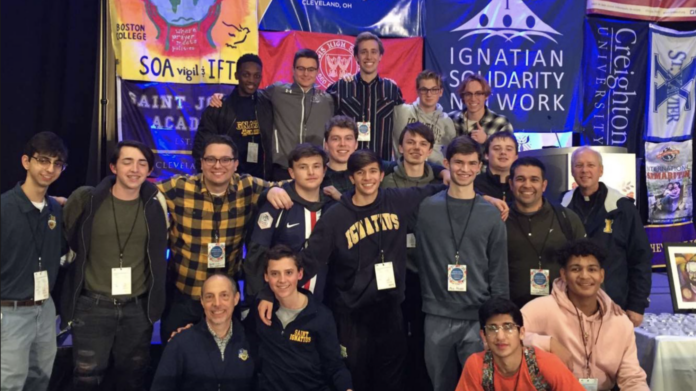 On November 15-18, 2019, fifteen Ignatius students embarked on an inspirational Teach-In held in Arlington, Virginia under the head of Mr. Pacetti, Mr. Luisi, Fr. Dan Reim S.J., and Mr. Savastano. Along with our students, Saint Joseph Academy and Walsh Jesuit High School joined the trip. For more than 20 years, the Ignatian Family Teach-In for Justice has been compelling students from around the globe to approach the world with radical hope and prophetic action.

As a member of this trip, I feel compelled to share this inspirational weekend with you. The two-day conference, from Saturday to Sunday, was held at the Marriott Hotel. With over 2,000 students from around the world, solidarity was best exemplified due to the connections everyone shared. The conference featured a variety of public speakers who gave their personal testimonies on their commitment to social justice. One such speaker, Chloe Becker, a senior at Magnificat, described the mural she painted honoring African saints. Another inspirational speaker was Sister Peggy O’Neil, who described her life journey as a missionary in El Salvador, students became motivated to commit to prophetic action.

Solidarity, the union of people, and diversity were also underlying themes. Everyone is equal, no matter what skin color you are born with. We, as children of God, must treat everyone with the dignity that they deserve. We must follow the Golden Rule. This teaching was addressed in the real world problem of immigration. According to the conference, “the root of the problems our country faces with immigration is racism.” Our country sees people of different skin colors as inferior due to their circumstances, such as their income, social status, intelligence, etc. But they are all people. Everyone in this world is on a quest for lifetime happiness, and why should be dishonor this quest from certain people? Through prophetic action and solidarity, our country can join together to work for better immigration reforms.

On Monday, November 18, we participated in advocacy visits. An advocacy visit is when a group of people lobby to government officials and aim to influence decisions with political, economic, and social systems. The Ignatius students spoke with Senator Rob Portman’s staffer, or assistant, and advocated for certain reforms, such as immigration and climate change. With proper persuasion and passion in the students’ dialogue regarding immigration reform, immigration personal testimonies, climate change, etc., Senator Portman’s staffer was extremely impressed and promised to inform Senator Portman. At this point, we can only hope for change and stay informed about other issues our government faces.

After participating in the Ignatian Family Teach-In Conference, students from around the world learned that we can change the world. We need to be passionate about certain reforms to better our country. With the help of people around the world, we can persuade the elected representatives in our government to change what we believe is just. We have to be committed to prophetic action and radical hope. If more people are committed, the more we can join together and change what we want to see.