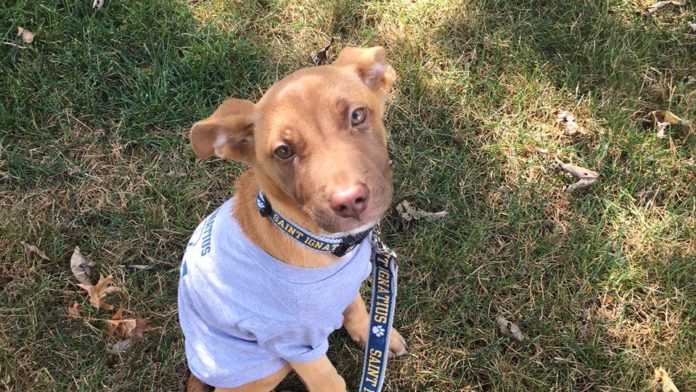 On what began as yet another dreary day of high school, many students arrived on campus in the morning to find a new face welcome them. A skimpy, fur-faced creature danced around the mall, overwhelmed with the excitement of a new environment. Many students, most of which pleasantly surprised but thoroughly confused, wondered if it really was what they thought it to be.

Yes, a dog really had found its way onto the Wildcat campus.

Overcome with glee, the dog clearly could not contain her ecstasy as it darted around, warmly greeting every new person she could find, literally shaking with the energy of it all. Such a pure, happy soul brought a smile to nearly every student, faculty, and staff member she passed, but it was quickly realized that someone needed to decide what to do with the new dog on campus. Most didn’t know the logistics of the dog being property of the school, and nobody knew if it was even safe to be near her: she had no collar or identification of any kind.

The entire known story behind who the students had unanimously dubbed “Iggy” was that she was found crying under a car in a parking lot after living on the streets, most likely scrounging for food. She then followed a group of students onto campus, and that was that. What happened before that, any diseases or conditions that she might have, or why she was thrown onto the street, was completely unknown.

However, nobody felt right about throwing Iggy back to the mercy of the streets.

So somebody stepped up. Mrs. Diana Pavlik, from the Assistant Principal’s office, offered to adopt the newly found puppy, and brought her into the Ignatius family.

Since then, Iggy has been spotted on numerous occasions on campus, being a positive presence for the potentially stressful environment of high school. When at school, she spends most of her time in the Admissions or Counseling Departments, where she is kept and fed by the staff. Iggy has been treated back to health after a life on the streets that would have meant death if not for her wandering onto campus.

Now, she is being trained to be a therapy dog for the school. In other words, once trained and certified, she will be on campus just to be a calming presence for any students who feel overwhelmed or upset with something in their lives. It is not known how long the training and certification process will take, although it will most likely be upwards of a year.

However, in the meantime, that’s not the last students will see of Iggy. She will still be on campus, usually around two days a week, and will absolutely show her face for special events (many may have found her in a hot dog suit amid the festivities of Counselors on the Quad). On top of that, she was formally blessed on the stairs of St. Mary of Assumption Chapel on October 3rd, signifying her official entrance into our family.

Iggy’s hopeful story finds a happy ending on the Ignatius campus as she gears up for a busy year in her quest become a licensed therapy dog. Until then, however, although she may not exactly be a cat, the school as a whole has certainly accepted her as an unofficial mascot, and will definitely appreciate her happy face around the school.