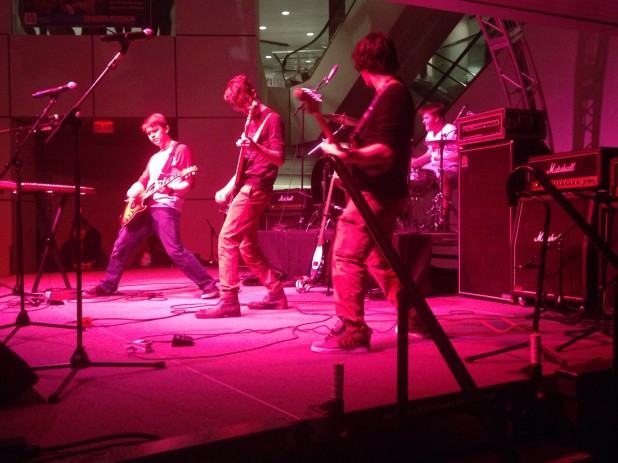 It is daunting to enter into an establishment built by greatness and hold your own, but that is the challenge faced at the CSU Rock Off at the Rock and Roll Hall of Fame. Hundreds of kids, some as young as thirteen, enter into this holy house of music in an effort to take their shot at stardom. The Rock and Roll Hall of Fame is hallowed ground to millions of fans and home to legends of music history. Larger-than-life pictures of Jim Morrison, Bob Dylan, David Bowie, and more legendary musicians line the hallway that leads to the conference room where these amateur bands prepared.

I had the good fortune of witnessing the Rock Off which featured some more than memorable acts. As I entered the second round at the Hall of Fame I was greeted by The Loose Strings’ acoustic cover of Michael Jackson’s “Billie Jean” that was about half as fast as the original. This first band marked the beginning of a couple of recurring themes of that night. First, the overwhelming majority of bands that performed featured a female lead vocalist. This revelation of the gender equality in up-and-coming rock and roll was a shock me, as I had thought of rock and roll as more of a boys club. But there they were, girls of all ages from all over the state singing their hearts out up on the stage. The other theme was the immense amount of original music these bands played. Most of the bands I have come to love and admire started out as cover bands, and to see all these high school kids writing their own material was inspiring to me, not only as a fellow musician but also as a fellow fan of rock and roll. These bands will be my generation’s mark on music history.

The first group of the night that really caught my attention was Trusting Obscurity from Madison, Ohio. With their hard driving guitar riffs and pounding drums, one does not know where to begin when describing Trusting Obscurity. The band blends the loud and quick tempo akin to the Ramones with the blues-rock fusion of Led Zeppelin, if either bands had a female singer. I would be remised if I was to forget the incredible lead vocalist. Her infinite range, dominating stage presence, and powerful delivery of the lyrics was the exclamation point that brought Trusting Obscurity together. Trusting Obscurity’s musical mission, in their own words, “… we are not a band that is trying to rebel against society or parents or whatever. We aren’t just making music to get a rise out of people. We make music so that music (especially rock n’ roll) never dies.”

The next show stopper from the Rock Off was Drift. Drift was one of two bands from the Rock Off that features Ignatius’ very own Holden Szalek on drums. In essence Drift is loud, raw talent. Even with the rough-around-the-edges sound of a high school band, any lover of rock music can see, or rather hear, right through it and acknowledge the uninhibited potential that is Drift. The only way to put it into words is: Drift is an orgy of music devotion, ambition, and promise. Anybody who was lucky enough to see them live is definitely strumming on a guitar or beating some drums right this very second.

Last but certainly not least of the Rock Off profile is M4. A smattering of 13 year-olds from Erie Pennsylvania, M4 shatters the myth that age equals talent. M4’s lineup of 3 electric guitars plus a bassist gave them the heaviest instrumental section of the whole Rock Off. The sheer talent of their guitar section, and mainly their lead guitarist, 13 year-old Ben Semple, dawned on me during the band’s cover of Guns N’ Roses’ “Sweet Child O’ Mine”. As Semple began picking the iconic guitar intro it became crystal clear to everyone in the audience that he was lightyears beyond any other guitarist his age. As the song progressed onward through the verses I thought that this kid had just memorized the guitar tab through endless nights of rehearsing, that is until he hit the solo. The perfection and precision of every note of the solo cemented M4’s mark on the Rock Off, and in my memory. However, Semple was not the entire band. The lead singer, Audra Miller, was faced with a monumental task herself: match the power of such a strong guitar section with her singing while still maintaining an element of femininity. It is my humble opinion that nobody else in the Rock Off could have stepped up to the challenge the way Miller did. However the group was still a little mismatched, a hard rock group that looks like a boy band with Taylor Swift singing, but not one of them is even an upperclassmen. With all that time to refine their sound, it is only a matter of time till M4 is at Lollapalooza.