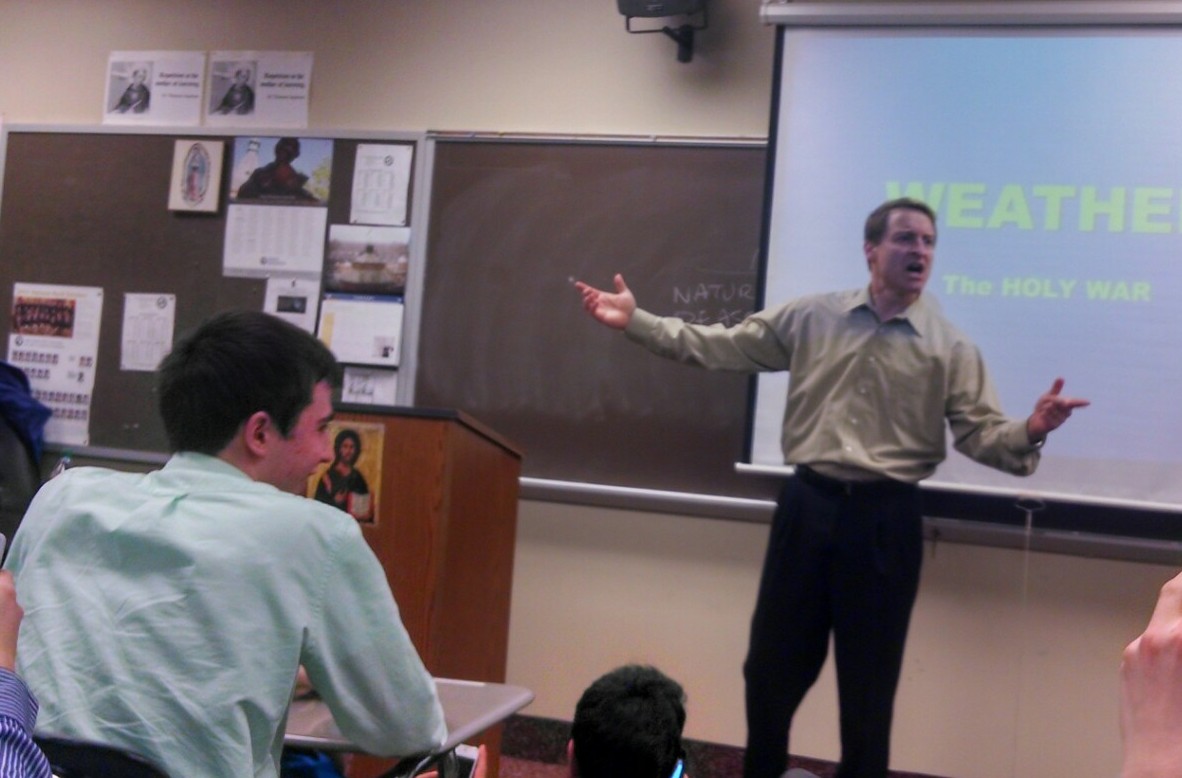 On January 27th, local AMS-certified meteorologist Mark Johnson visited St. Ignatius High School to argue that global warming is neither real nor anthropogenic. Mr. Johnson presented a compelling case for his hypothesis and has, no doubt, dedicated a great amount of his effort to the research of this topic, so I’ll let it be known, my intention is not to refute Mr. Johnson’s essential claim.

I am neither a climatologist nor a meteorologist, so I won’t pretend that I am Mr. Johnson’s intellectual equal in the field of climate change. That said, I do not believe that the skeptic’s case is truly so settled as Mr. Johnson would lead us to believe, and I am concerned that many students may have left the presentation with the erroneous certainty that climate change is a non-issue. Here, I will make the case why global warming remains a real possibility, but why this should not be a public concern regardless.

Mr. Johnson identified two central tenets of climate alarmism – that warming is 1) real/anthropogenic, and that 2) it is catastrophic. Because Mr. Johnson spent almost his entire speech attempting to disprove the first of these tenets, I will begin on this question, though I believe that our concern should lie predominantly with the second of these two contentions. Mr. Johnson raised a number of legitimate objections to the warming hypothesis, but the assumption that these are new objections that have not been taken into account in the existing body of climate research is simply incorrect.

Based on both satellite data and comprehensive surveys of scientific opinion, the scholarly consensus and preponderance of empirical studies seem to substantiate the case for anthropogenic climate change. Analysis of almost twelve-thousand peer-reviewed studies (twenty-nine thousand authors) indicates that 97.1% of climate research abstracts endorse the opinion that warming is real and anthropogenic, compared to .7% to outright reject the consensus hypothesis.

Mr. Johnson’s main objections to the consensus view were that the Earth has not warmed in the last 15 years – though 90% of all warming takes place within the oceans, something that is not accounted for in Mr. Johnson’s US-only graphs – and that urban measurements distort the amount of real warming – though the difference between rural and urban measurements, which NASA normalizes anyway, is relatively small. There exists no evidence that the “Climate-Gate Controversy” in which leaked emails at the University of East Anglia revealed censuring of climate skepticism reflects a widespread conspiracy in climate literature, and the skeptic petition to which Mr. Johnson is a signatory consists predominantly (99.9%) of non-climatologists, and 99.5% of signers have absolutely no formal background in climate research.

Now, there are certainly reasons to be skeptical of apocalyptic depictions of warming popularized in the entertainment industry, and Mr. Johnson is correct in stating that the issue of climate change is an unsettled matter, as many qualified climatologists object to the established consensus view. A number of adaptation strategies, negative feedbacks, climate desensitization , and possible fertilization effects do lend credibility to the belief that, in all likelihood, global warming will not mean the end of the human race – in fact, there will be numerous positive effects of climate change accompanying its predicted negative consequences.

However, Mr. Johnson was dangerously wrong in urging students to discount the consensus view of experts – we do not know the effects of climate change, and Mr. Johnson’s presentation should not serve to confirm students’ beliefs in climate skepticism. This matter is complex and debated within scientific literature – overly simplistic presentations, though not wholly inaccurate, do not truly represent the state of the climate debate, but only serve to mislead the public. We who are not qualified climate scientists would be both intellectually and morally irresponsible to assume ourselves capable of answering this scientific question, so I advise my fellow students to refrain from the pretense of knowledge when it comes to climate change.

At the End of the Day, Interests Outweigh Values in Foreign Policy