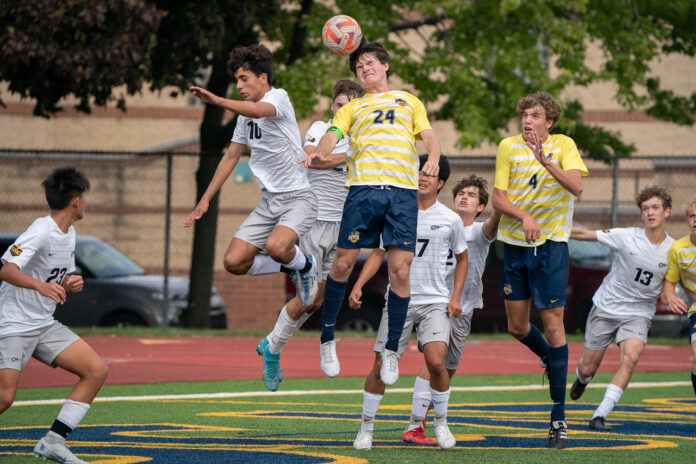 The Soccer Cats are gearing up for the 2022 playoff run. The soccer program recently has found significant success in the OHSAA playoffs, winning the last three state championships by a combined score of 10-2. The team has carried on their dominance this season; however, it hasn’t come without adversity.

The Varsity Wildcats entered the season with a significantly more experienced group of seventeen seniors, six juniors, and six “swing” sophomores led by an outstanding group of captains: midfielder Nolan Spicer, the recipient of the 2021 Ohio Gatorade Player of the Year Award; goalkeeper Patrick McLaughlin, who came one clean sheet shy of tying a Saint Ignatius scoring record with eighteen; Nathan Trickett, whose immense offensive talent at the wing helped lead the 2021 team to their 140 goal season; and Owen Sullivan, a key defensive leader on the 2021 state championship team. Led by this core of star players, the team stood atop the state of Ohio as the season began.

After going undefeated in their three preseason games, the team would win their first two regular season games with relative ease, beating Avon Lake and Twinsburg by 5-0 and 9-1. They traveled to Toledo to compete in the Jesuit Cup. To this point, every St. Ignatius soccer team to win the state championship has also won the Jesuit Cup. Understanding this importance, the team won in convincing fashion, beating St. Xavier 6-2 in the semifinal and St. John’s Jesuit 8-0 in the final and hoisting the Jesuit Cup trophy for the fifth straight year. The team then defeated University School, St. Charles, Mason, Shaker Heights, Toledo St. Francis, and Massillon Jackson, establishing their dominance of the state.

Then began one of the most difficult weeks in the program’s history. For years, the soccer program has sought to play elite opponents across the nation. True to this aspiration, the team embarked on a trip to New York and New Jersey to play against second-ranked Saint Benedict Prep and Chaminade High School, a New York soccer powerhouse.

Lacking key winger Captain Nathan Trickett, the Wildcat offense stagnated against Saint Benedict, and the defense could only hold off the talented Benedict forwards for fifteen minutes. Still unable to enter an offensive groove, the team was unable to equalize after conceding a second goal late in the second half. The mighty sixty-eight game winning streak ended as the team fell to second in the national rankings. The team would be forced to push beyond their strong disappointment, however, as they still had a week of games ahead of them.

The next day, the Wildcats traveled to Long Island to take on Chaminade High School. Chaminade didn’t quite have the same accolades as St. Benedict, but they were a worthy opponent. Fueled by the thirst for revenge, the Wildcat side scored in the first ten minutes. They never looked back and came away with a satisfying 4-1 victory.

The tireless week was not over yet, though. The Wednesday following the trip, they returned to Wasmer Field, taking on Western Reserve Academy, ranked 25th nationally by the United Soccer Coaches Committee. They fell behind 1-0 early in the second half of the game, but two heroic goals by Nolan Spicer and a final seal by Owen Sullivan in the last ten minutes of the game carried the Wildcats to a scrappy comeback victory.

The coming Saturday, the team played their fourth game in seven days against Calvert Hall, a team from Maryland ranked top 10 nationally. The Cats began an early 2-0 lead, but exhausted from the long week and with four starters inactive due to injury, they couldn’t maintain the lead and fell 4-2 after one of the most difficult weeks in program history.
Despite a pair of defeats and losing their top spot nationally, there was a sense of accomplishment among the team: “Too many teams are happy with a good record at the end of their season having played nobody. That gets you nowhere,” said head coach Mike McLaughlin ‘85. “The more you can prepare yourself during the regular season, the more you’re going to be ready for the playoffs.” This attitude echoed throughout the program, and the players, rather than sulking about outcomes, used it as an opportunity to improve and prepare for the playoffs ahead.

The team bounced back and won their final two games, picking up a 4-0 victory over the St. Edward Eagles and a 1-0 victory over Dublin Jerome. They ended the regular season with a record of 14-2, with a total of sixty-seven goals for and fourteen goals against.
At the time this article is published, the team will already have begun their playoff run. Their first two will be played at Wasmer Field before finishing at Lower.com Field in Columbus, Ohio for the OHSAA State Championship. Over the past few years, the team has seen great student section showings, and the team is looking forward to this support continuing: “Soccer is such an emotional game, and to have that emotional charge from the fans, it makes a big difference. So fans, please, help us to win” said 11-time state and 7-time national champion coach Mike McLaughlin ‘85.

Information on the games and the brackets will be posted on the Ignatius Soccer Homepage for fans to support them during their hunt for the fourth straight state championship.