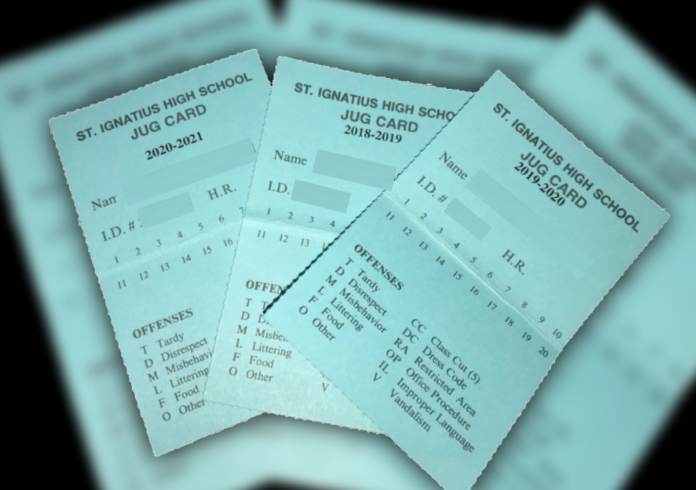 For some students, it is their worst nightmare. Other students could care less. And a few students do not even know what JUG means. JUGs, which are an acronym for Justice Under God or are derived from the Latin word jugum, are Ignatian detentions. As would be expected, the issuing of JUGs comes with memorable, funny, and interesting stories from teachers. If you would like a brief history of the JUG, here is a great article: Jug ‘Em with a Jugum. Below you will find a collection of some of these memorable teacher JUG stories.

When a student receives a JUG, he must serve time for his misdeed, but what happens while serving these JUGs can vary. Mr. Hennessey shares a memorable time while being in charge of one of the very fun activities that students did while serving JUGs. “When students used to serve Saturday JUGs on a Saturday morning, I would have the students move a pile of bricks from point A to point B and then back to point A after we swept where the bricks were at where we started because a clean brick is a happy brick.” Mr. Hennessy said, “After about 2 hours of moving the bricks, a student said, ‘Mr. Hennessey, what are we building with these bricks.’ I said, ‘Character. Keep moving.’”

The next story is an old one, dating back to the 1980s, and it has planning in it that puts Home Alone to shame. In it, Mr. Kobe gives a great example of why we should all fear the intelligence of an Ignatius teacher. “I have given very few JUGs over my career. The most memorable was to a student I caught smoking in Wendy’s. It was in the eighties and smoking had just been banned from campus. My proctoring duty was the mall. On days when the weather was not agreeable and few students gathered on the mall, I would police the alleys and doorways of Ohio City surrounding campus looking for students sneaking a cigarette. I apprehended quite a few! In the spring of his senior year, a particular student began bragging that he had smoked every day of high school during his lunch period and that I had never caught him. This boast made its way back to me, and I accepted it as a challenge!”

Mr. Kobe said, “I researched the student’s habits and discovered his technique. He would wander over to Wendy’s, stand in the foyer, and smoke, watching to see me cross Lorain Avenue on my rounds. As soon as he saw me, he would extinguish his smoke and pretend that he was purchasing lunch. I quickly formulated a plan. The next day, he went to Wendy’s as usual. I ran around Wasmer Field and entered Wendy’s from the door opposite from where this young man was positioned watching for me. I walked up behind him, tapped him on the shoulder, and asked for his JUG card. He was in total shock but still tried to conceal his misdeed. He placed his lit cigarette into his coat pocket trying to deceive me. Well, this will be interesting, I thought. He denied having a cigarette and we chatted for a bit until I noticed smoke emanating from his trench coat pocket. Not wanting him to suffer burns, I helped him extinguish the smoldering pocket lining of his coat and procured his JUG card. I believe that he earned 15 JUGs that day; 5 for smoking; 5 for off campus; 5 for resisting arrest.”

Some freshmen do not have any JUGs and may go through the rest of their Ignatius career without one. Given that a JUG isn’t the most honorable mark to receive, some freshmen might think it’s the end of the world for them if they do get a JUG. However, in Mr. Wimbiscus’ memorable JUG story, he shows that if you get a JUG as a freshman, you still have some hope. “As often happens with freshmen, they try to outsmart the teacher. Bad move. The story is about a smart-aleck little freshman named Tony who when I had asked the class, who were all misbehaving, ‘is there anyone who would like a JUG?’ He raised his hand slowly and said, ‘sure.’ So I called his bluff and jugged him. He served it, after being informed by the office of the JUG.” Mr. Wimbuscus said, “The next day in class he asked me why he got the JUG, I replied, ‘well you asked for one.’ The class laughed. Cut to a decade later and the same young man would become my student teacher. And Tony brought it up one day in conversation, saying that he only had one JUG in all 4 years, mine and that he totally deserved it. Tony goes by Doctor now and teaches at a university. There is hope for every smart-aleck frosh.”

Hopefully, these JUG stories brought a little humor to your life. Along with that, hopefully, these stories helped to tell you how to not earn a JUG.

Advice from Seniors to Underclassmen