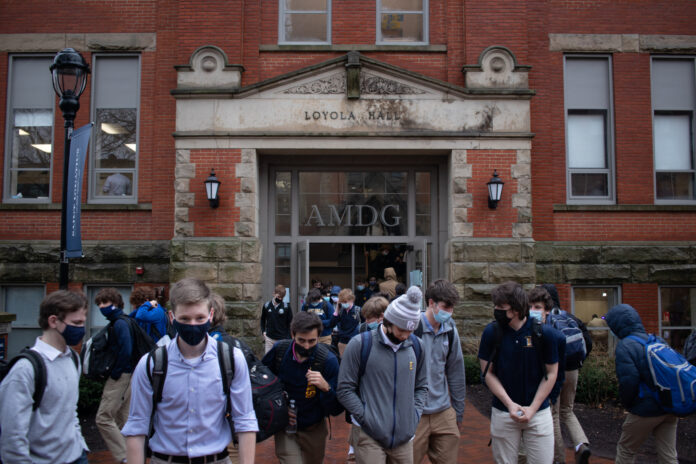 Since the first week of school in August, a return to full-time in-person learning has been constantly looming. For some, this inevitable return was openly welcomed as it would allow for greater social interaction and preparation for next year. For others, a return seemed nonsensical as most students and parents still lacked vaccines and saw no issue with the half-day schedule.

Regardless, on Monday, March 15th Saint Ignatius came back as an entire student body, but the reasoning behind this decision was never entirely evident. On March 11th the teachers got the second dose of their vaccine, but was that the only reason? Cases have been trending down, but at what point was it low enough? Were the views of parents and students taken into consideration?

According to Principal Dr. Anthony Fior, the decision came from all of those things and more. “Last June, I didn’t really know, you know, everything was so uncertain still. We didn’t know a lot about the virus.” As school closures spread across the country, Saint Ignatius joined the charge for the safety of faculty, students, and their families. Originally, this measure was largely precautionary as cases were still very low, but so was knowledge of the virus.

So, for the remainder of the 2019-2020 school year, students worked from home, but as the next school year approached, newly appointed principal Dr. Fior held on to the eventual return. “At this school, our number one priority was to get kids on campus as much as possible.” In August, this meant bringing in only half of the students for half of the day to ensure 6 feet of distance could be ensured in classrooms. Fior then added, “as we worked through the fall semester, we started talking about, well, what would it look like if we could get all of our kids back on campus at some point?”

According to Dr. Fior, “[the school has] yet to have a case, to my knowledge, of [the virus] spread on campus in a classroom–-from student to student in a classroom.” Seeing that Ignatius could return safely without internal spread, the idea of a full return began gestating in the minds of administrators. Despite this lack of internal spread, however, students were still reporting getting the coronavirus.

“The majority of our cases that we’ve had as a community have really been around two things: the socialization of sports, to be honest, and really a lot of adult spread,” says Fior. During the 2020-2021 school year, sports teams have not halted practices. Even in December when all classes shifted to virtual learning, sports continued. Whether this continuation in times of high spread caused cases to linger and spread further is unclear. However, in an interview shortly after the announcement to go virtual, Dr. Fior defended the choice saying “most COVID cases are happening around the socialization of sports… Parents watching games, some of the locker room stuff, but it’s not the sport specifically.” One would wonder how the socialization of a sport is not linked to the sport itself, but sports continued regardless.

In addition, Fior notes President Fr. Raymond Guiao’s support of going back saying, “it was very important to Fr. Ray that we could get kids back on campus as soon as possible, but we also wanted to make sure we could do it, do it well, and do it as safely as possible.” So to begin the process of choosing a date to make that happen, Fior recalls talking about a weather improvement in March. Furthermore, he noted that going into the month of March, cases were declining and still less than 1% of the school’s entire population has been COVID positive in the second semester.

Speaking on the safety of a return, Dr. Fior addressed some of the potential concerns that might arise from having more students in person. “We would have to eliminate the six-foot distancing in all of the classrooms. And there are some studies out there that say three-foot is sufficient, and we still know that we can’t do three-foot in every classroom.” Just as the safety of the hybrid schedule at the beginning of the year was uncertain, so too is this relaxing of distancing, however, based on the ultimate decision, it is apparent that the school is willing to take that risk to allow for an in-person educational experience.

At the time of the return, however, not everyone was equally at risk as faculty members received their second dose of the Pfizer coronavirus vaccine the week before the return, while likely no students and few parents can say the same thing. Some have seen this as a case of those in power only looking after themselves, to which Dr. Fior responded: “I don’t think I don’t think that’s true. Like knowing myself, knowing Father Ray, knowing our leadership team, the senior staff and the administrative team of the school. We all really care about kids. That’s why we’re here.”

To support this move, Fior also added, “we were also really concerned about mental and emotional wellness of kids. We wanted to provide many, I would say the majority, of our families the option to send their sons to school in-person every day. Still, Fior acknowledged that some families are not ready to return and has left the option to remain or start going virtual open.

Dr. Fior highlighted that it was ultimately a balancing act saying “there’s no perfect answer.” But given all of the factors that have just been laid out, Dr. Fior and other administrators felt a return was acceptable.

So far, Dr. Fior has been happy with the results. “I talked to the freshmen today during their lunch period. They haven’t been together as a class since August, you know, and that sense of community, that sense of brotherhood, the in-person relationships, everyone here in the Saint Ignatius community knows how important those are.”

Despite such optimism, fear and anxiety still somewhat remains as Dr. Fior said “Am I anxious? We haven’t had 1,500 boys on campus in a year. So if we’re not anxious, that means that we don’t care and we all care.” He then continued saying “It’s going to be a little messy, but that’s okay. We’ll get through it. We’ll make changes.”

At the end of the day, Dr. Fior says he wants to be in-person, but will do what is best for the community. Thus, a final reason for the timing of March 15th is that it gives two weeks of full in-person learning before spring break. “So, if there were some serious adjustments we had to make, we would have that little bit of break to make those changes.”

“I just hope that we, as a community at Ignatius and a larger community, still realize that we’re, you know, we’re not at the end of the tunnel yet. We haven’t crossed the finish line. We still need to wear our masks. We still need to distance when we can, we still need to wash our hands and stay home if we don’t feel good. We need to continue to do all of those things.”