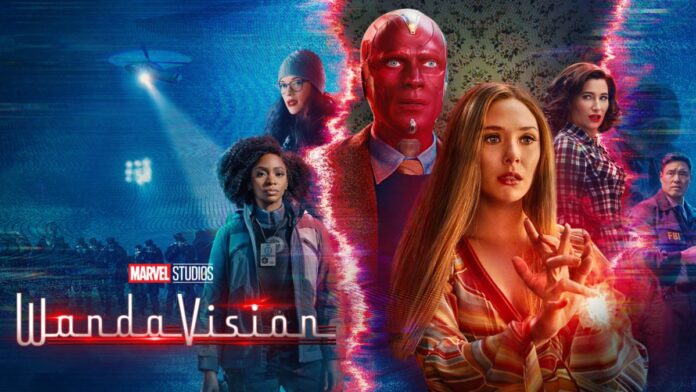 WandaVision is the the next stage of the acclaimed Marvel Cinematic Universe, and it is safe to say that in general fans enjoyed it, with it garnering a 91% on Rotten Tomatoes. I, too liked the show, but could not help but feel that some aspects of it were kind of bland or weak. It suffers from a lot of the same problems that plagued other MCU movies, but before getting into the specifics of what I didn’t like, let’s talk about what I did like.

For one, this show came out at the perfect time. It had been so long since we had seen anything Marvel related, so just having a taste of some Marvel action was well appreciated. The general environment of the show was also really fun to watch. Transitioning through different styles of sitcoms as the episodes progressed was a really fun experience as a viewer, going through parodies of sitcoms such as Bewitched, The Office, and Malcolm in the Middle. These different styles kept every episode feeling fresh and original, which is something that Marvel movies can somewhat falter in at times, as Marvel movies can feel repetitive and just like the last one at times. The show having released a new episode once a week really built up the tension between every episode which a typical movie can not replicate.

One of my personal favorite things about the show was the inclusion of Evan Peters as Peter/Pietro Maximoff, also known as Quicksilver. As you may or may not know, Evan Peters played Quicksilver in Fox’s X-Men movies, which were recently bought by Disney. Peters’s presence in WandaVision seemingly unlocks a whole treasure trove of possibilities for how the X-Men may be introduced into the MCU. It also introduced the possibility of a multiverse, as Quicksilver was previously portrayed by Aaron Taylor-Johnson in Avengers: Age of Ultron. With  two Quicksilvers in the MCU, the possibility of a multiverse grows greater.

But Evan Peters’ Quicksilver comes with one of my problems with the show, and that’s that they didn’t do enough with him. Quicksilver has a significant role in one or two episodes before essentially being reduced to cameo roles after that. On top of this, in the finale once Wanda’s spell wears off, it is revealed that Peters isn’t really Pietro/Peter Maximoff, but a stranger by the name of Ralph Bohner. While the name is funny, it doesn’t clear up what Ralph’s role is. Many fans, including myself, are optimistic that Peters will return to the MCU in some degree, but for now the multiverse possibilities have been dampened.

I think many people found the finale of the series underwhelming. Wanda realizes that what she’s doing is wrong and ends the spell. She defeats the evil witch Agatha Harkness and restores Westview to its original state. She also finally dawns the Scarlet Witch costume, which was an awesome scene, but an expected one at that. The finale of WandaVision suffered the same fate as many MCU movies in that it was pretty predictable. Once I knew that Wanda was controlling the citizens of Westview, I had a feeling that the show would end with her realizing her errors and letting go of her control. Likewise, once I knew that Agatha was the main villain of the show, I could easily predict that the show would end in her defeat. Thanos has not been the biggest villain of the MCU, predictability has been.

I know I talked much more negatively about the show than positive, but I really do like the show. I love Wanda and Vision’s relationship, the ever-changing setting in Westview, and Randall Park as Jimmy Woo. This show has so much to like, but there is also a good deal of stuff that I find trouble in enjoying. WandaVision proves to be a good start for what the future holds for the MCU, but like all things Marvel, is far from error.