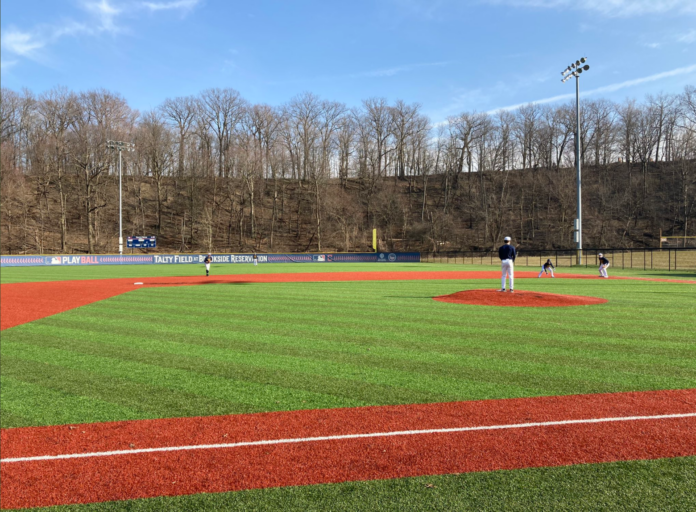 After having last season canceled due to COVID, the Baseball Cats still have high hopes going into a season where they have to defend their state championship.

The team this season will have a lot of new stars that many Wildcat fans have not seen play on the varsity level. To start, captains Matt Giberti, Gip Conroy, and Johnny Panstares are all players who can make a big impact on the field. Giberti is a fast outfielder, and is the only captain with varsity experience. The Harvard commit was a pinch runner for the Wildcats during the 2019 state title run. Panstares is another speedster who will be an outfielder no opposing batter wants to hit towards. Williams College commit Gip Conroy will play second base this season. Conroy’s work ethic has helped him become flawless in the middle of the infield, and he is always willing to do whatever it takes to help the team win games. The final player to look out for this season is Gabe Nard. The former freshman phenom won the state championship for the Wildcats in 2019 in his first ever varsity start. Later that year, Nard committed to Duke. Currently a junior, Nard will be the Wildcats’ ace this season.

Coach Ganor spoke very highly of the captains, and had comments on how good it is to be back playing baseball. “The captains have done a great job galvanizing the rest of the group. I think across the board the seniors truly missed last year, and they have a true realization now of how special it is to be together, and be a team.” Ganor says. “We’re seeing that now guys are staying after practice wanting to hang out, and wanting to see each other. In the past, maybe people take those things for granted, and they rush off to do whatever they were doing, but we’re still seeing it more and more where guys are really enjoying being around each other.”

Truly, there is a strong bond with this team. While many players are getting their first opportunity to play with one another, the team as a whole is taking the extra time to grow. When it comes to the steps the team has taken in the past, Gip Conroy said: “This is a new team with a new mindset this season. A lot of us teammates have not played together before, and we were not able to do a lot that we normally do over the offseason. With that being said, it does feel great to be back together. The team’s chemistry is very high this season because of the time spent away from the game, and how we finally get to be back.”

Believe it or not, this is also the first season the baseball team has been able to use the Carfagna Family Magis Athletic Center. While construction on the MAC was completed in 2019, the baseball team was only able to use it in the winter last year before the middle of March. Coach Ganor added, “We were just getting our feat last year, just kind of figuring it out, breaking it in, and then we got shut down, so this year is huge. You have already seen the benefits of how we’re able to structure our practices, the things we’ve been able to do in there, it’s an amazing facility.” An amazing facility indeed. The MAC is something that Saint Ignatius has that almost no other school in the state has, and the results will show on the field this season.

This season’s schedule is not easy for the Wildcats. All home games will be played at Brookside Reservation this year, and there are top-tier teams in the area that will come to Brookside. On April 8, they take on that team from Lakewood, Solon travels west to play the Cats on April 22, and the team battles Avon on April 26. April 27 is when the other Wildcats from Mayfield play the baseball team, and then the reigning state runner up Mentor Cardinals will travel to Brookside. Notable road opponents the Wildcats will play are Amherst, Gilmour, Strongsville, and Walsh. These are all tough opponents that will prepare the baseball team well for a postseason run. When talking about the schedule, Conroy stated, “I’m looking forward to playing Walsh in the Ohio Jesuit Tournament the most. Although we are the reigning state champions, Walsh is ranked higher than us in the preseason rankings.”

When asked about the goals for this season, Coach Ganor commented: “The ultimate goal of this season is the same as every other division one school in the state.” Ganor said, “The ultimate goal for me though, is to make this an amazing memorable season. Hopefully it culminates with a championship, but that’s hard to do, those aren’t guarantees, but I can guarantee that we’re going to work very hard to create memorable, amazing experiences for these kids.”

The baseball team has gone through many obstacles to get where they are today. They are ready to take on this season, and whatever challenges come their way. With high morale and a lot of preparation, the Wildcats will have a fun season, and have a lot of success.