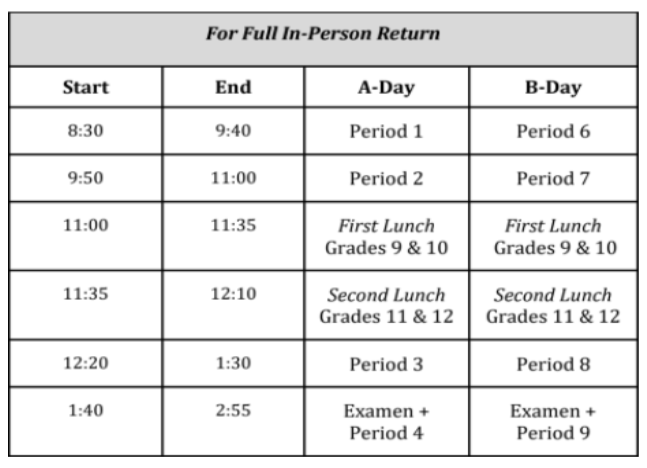 After it was announced that Saint Ignatius High School was returning full time in-person, many in the community wondered what schedule would be adopted for the rest of the year. While the school waited for its answer, speculation about the return schedule grew and anticipation around it built.  On Wednesday, March 3rd, it was finally released and it is not what many were expecting.

There were various options for the March 15 schedule. The process of narrowing these various options and choosing a final schedule, according to a letter sent by Principal Dr. Anthony Fior ‘02, “was not an easy [decision] to make nor immediately clear.” Other than the one that was ultimately chosen and released to the school, the other schedule options included one, according to several teachers, that would have been a modified, 9 period schedule. The 9 period schedule would have been a normal schedule except the common period would have been completely removed.  Lunch would have been eaten during a student’s free period or, if the free period was too early or late to reasonably eat lunch, during a student’s 4th or 6th period class. This schedule would have also ended earlier and maybe would have started later.

At their first glance of the schedule that was chosen, many students objected with comments like, ”I don’t want to sit through 70 minutes of class time,” and, “I’d rather just have the normal 9 period schedule.”  Not many students seemed to like the new schedule that would be inplace on March 15, but they might not have gotten the whole picture.

According to several teachers who would prefer to remain unidentified, this schedule was made for students.  This schedule was picked in part because of interviews with other Jesuit schools and their students.  Other Jesuit schools with this schedule reported that at first, their students, just like Ignatius students, disliked the idea of the schedule, but after having it for a while, the students came to appreciate it.  According to teachers, the schedule is designed to lower stress, decrease student’s homework load, and have other benefits for students.  The 70 minute classes are not intended to be 70 minutes of lecture time. It often, instead, will be broken into parts.  For example, maybe 35 minutes of learning, 20 minutes of group work, and 15 minutes to do homework. Teachers are also supposed to only give around 30 minutes of homework to their students per class, not per night.  With 35 minutes of free period between 2 and 3 periods or 7 and 8 periods plus 70 minutes of free time during free periods, students can hope to finish a reasonable amount of their homework at school.

Another reason that this schedule might have been picked is because of lunch.  Getting around the issue of lunch has been tough for the school and is what probably caused the initial A and B half-day schedule we have had for the majority of this school year.  Eating is the only time students have masks for an extended amount of time which highly increases the risk of spreading COVID.  Splitting the lunch period into two groups will make lunch most likely more safe for students.

But will the implicated benefits of this new schedule be fully recognized by students once it is implemented? That remains to be seen. Until then it is likely that trepidations of the student body will persist. Regardless, on March 15th, the use of the released schedule is all but inevitable.