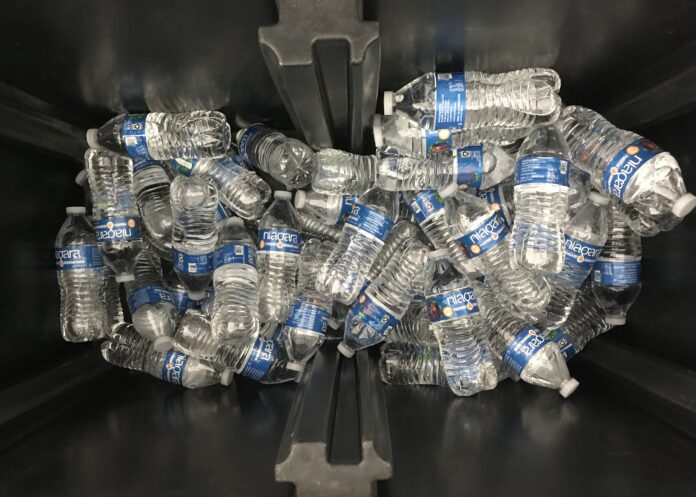 The COVID-19 pandemic brought many problems to the Saint Ignatius community. The school had to figure out how to properly have in person classes, effectively switch to online streaming, and keep track of any students who got the virus. One of the problems the school dealt with was preventing the spread of COVID through water fountains. In order to do this all water fountains were shut down at the beginning of the school year, and in order to provide water to students single use plastic water bottles were made accessible throughout the school.

The issues with providing single use water bottles are the environmental and financial impacts that it has on the school and the city of Cleveland. The costs to the planet and to the school from production to purchasing to disposal far outweigh the alternative of having reusable water bottles and easily available filling stations.

According to Ban the Bottle, an organization dedicated to spreading awareness about the negative impacts of bottled water, to produce one plastic bottled water, it takes three times the amount of water that is actually in the bottle, 2000 times more energy than the production of tap water, and around a quarter of a bottle’s worth of oil.

Furthermore, after all of those negative impacts in the stages of production, the disposal of plastic bottles is also costly to the plant. According to the Villanovan, the official student newspaper of Villanova University, “citizens in the U.S. throw away 35 billion empty water bottles annually. Of those, just 12% are recycled.” A water bottle in a landfill could take around 1000 years to decompose creating an environmental crisis from the large amount of toxic chemicals they leak into the ground.

The claim could be made that most students would recycle their plastic water bottles after using them which should put the issue to rest. However, Cleveland’s recycling program has had issues with contamination for many years. As of October 2020, according to Cuyahoga County Solid Waste District Executive Director Diane Bickett, 65% of the city’s recycling was contaminated meaning it had been thrown in a landfill rather than properly recycled. Therefore, having faith that simply recycling single use plastic bottles solves the problem only enables it.

One solution to this issue is to provide students with reusable water bottles that they can  carry with them throughout the day. Saint Ignatius already has water fountains that function as bottle filling stations, and most of them have not been shut down since they do not add to the spread of coronavirus. This proposal is environmentally friendly, cost effective, and healthy. Whether or not the school decides to provide students with an alternative to single use plastic water bottles, the excessive use needs to be controlled.