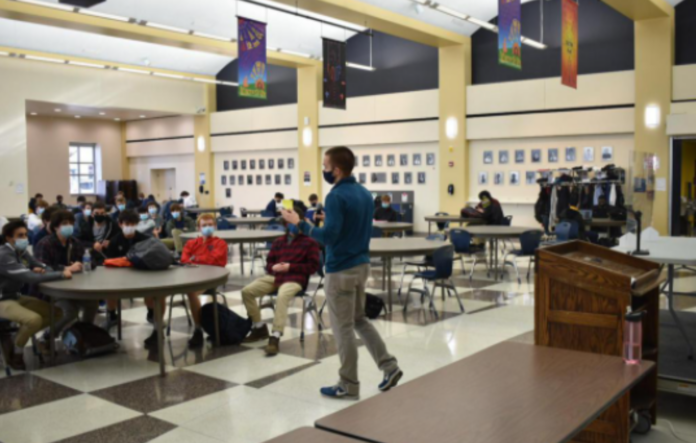 In November 2020, Dr. Michael Gallagher ‘71 announced he would end his 17-year reign as head cross country coach. On February 26, it was announced that his position will be taken over by the current cross country assistant coach Mr. Bob Wolf ‘08.

Wolf plans to “carry on the faith tradition that Doc [Gallagher] brought in”, praying at every event and “always being able to center and refocus our minds and hearts back to God after every practice.” He said Dr. Gallagher excelled at finding talented coaches, saying, “I would like … not only to be able to do that as well, but also I am blessed that most of those coaches are still sticking around.”

As an Ignatius student, Wolf had no plans to become a coach. Instead he thought he “was gonna be a doctor.’’ But as he got closer to graduation at Kenyon, his thoughts began to change.

When asked which coaches had the greatest impact on him, Wolf immediately responded with “Doctor Gallagher and Mr. [Chuck] Kyle [’69].’’ Wolf admired not only Gallagher’s desire to learn about running, but also “his ability to adapt to change and go from one thing to the other.” He also remembered coach Kyle once saying in a speech “just outwork ’em”. This quote resonated with Wolf, who took to heart the message that, regardless of a person’s skills, “as long as you put forth your best effort, then at the end of the day you can’t necessarily have any doubt or concern about anything. No regrets”.

Wolf said the switch to head coach is “gonna be a lot of work”, but he is “blessed to have a fantastic coaching staff” to help him make the switch. He also stated that, since he has experience with most of the current runners, he will rely on that familiarity in his first year as head coach.

Wolf’s primary strategy will be to get input from the runners and “build a training program around the individual athlete.” As an example, he mentioned that some runners are “a little bit more distance-oriented” while others will “benefit from shorter interval workouts.” This will allow each runner to play to his individual strengths and challenges. He also wants to focus on improving running technique to improve speed.

When asked his expectations for the 2021 season, he simply said, “winning, and just being confident.”