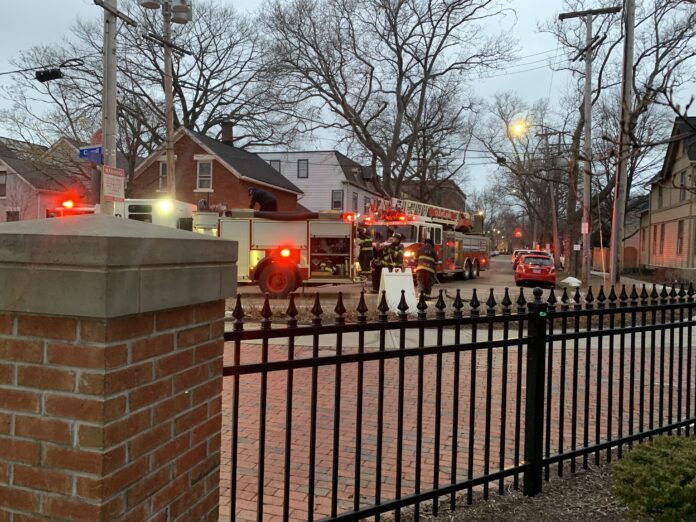 THE EYE SPECIAL REPORT | PART ONE

On the morning of Thursday, February 25th, a small fire in a basement closet of the Saint Ignatius High School Main Building was contained and extinguished before it could grow out of control. Its effects were limited due to the quick and momentous action of the school’s Campus Security and maintenance staff. While it did cause classes to move online for the day, as acknowledged by Principal Dr. Anthony Fior ‘02, the school is “incredibly fortunate [as] the situation could have been much worse.” No injuries were reported.

The Eye has confirmed key details about the incident and the effort to extinguish the fire.

At around 6:30 am when Plant Services Staff Member Mr. Ed Sass was completing his morning checks, he discovered the fire in a storage closet in the lowest level of the Main Building. Taking quick and pivotal action, he shut the door of the closet temporarily containing the fire, and pulled the fire alarm. The Public Information Officer of the Cleveland Fire Department, Lt. Michael Norman, said Sass’ “actions effectively contained the damage to that one room. We encourage people to close the door to their bedrooms when they sleep at night. We call that ‘compartmentalizing’ and it is effective at containing the fire, smoke, and heat.”

At the time, Security Officers John Nypaver and Andre Marti were on campus. Nypaver, who was interviewed for this report, has worked at Saint Ignatius for 18 years, since August 2003, and thoroughly enjoys his job here. His last job working for Pinkerton Security had him supervising the second shift at General Motor, and he gained experience in fire, police, and medical and he received fire brigade training. Nypaver’s years of experience and wealth of knowledge served the team well during events that followed.

After Sass shut the door, he notified Campus Security on his radio, shouting, “We have a fire!” Marti dialed 9-1-1 informing the Fire Department while Nypaver headed over the Main Building basement. As he approached, he says he “could smell smoke halfway down the hallway.” When Nypaver arrived at the storage closet door behind which the fire raged, he “could see the flames under the door.” He shared, “I felt the door frame was hot on one side and the wall was hot on one side. That told me that the fire was going pretty good.” While he waited for the firefighters to arrive, Nypaver says, “I kept an eye on the wall though because I didn’t want it to go through the wall.”

When the Fire Department arrived on campus, according to Norman, “Crews laid out a line but were able to extinguish the flames with a pump tank, which is a small portable water fire extinguisher all companies carry for small fires. We will use the pump tanks to get water on the fire quickly and to minimize water damage.”

Lt. Norman also remarked that “Naturally, there were members on scene who graduated from both St. Ignatius and your beloved rival St. Edward. The Assistant Chief on scene was Patrick Mangan, who went to St. Ignatius with your School President.”

At 6:58 am, Dr. Fior notified the school saying, “Due to a small but contained fire on campus in the Main Building, on campus classes are cancelled.” Around that time, according to a later email sent by Fior, BMS Cat arrived on campus to address the smell of smoke. According to Nypaver, “once they extinguished the fire, it was like London in the building. Smoke was just… [everywhere] in the building.”

It soon became evident that several important factors contributed to the successful extinguishing of fire with limited damage. Perhaps the most important of all was the timing which was almost perfect because there were people on campus to discover the fire, contain it, and call the fire department, but the campus was also not full of students, faculty, and staff which could have created other hazards, chaos, and barriers along with the monumental task of clearing out the entire school.

Yet the cause of the fire remained unknown early that morning. The Fire Department’s Investigators sought to determine the actual cause. Until they could make a determination, the Campus Security team faced one of its biggest challenges of the day: keeping people away from the scene.

School Resource Officer Freddy Diaz said that his team could not “allow anyone into the area until various factors are ruled out, for example, was this an intentional fire or are there other dangers evolving secondary to the first fire.” This task proved itself to be difficult because, as Diaz observed, “it is human nature to want to know what is going on immediately.”

Later that day, however, the cause of the fire was determined to be electrical and accidental. Norman revealed that the “Fire Investigators believe that when the air handlers turned on at 6 am, a faulty relay switch on the wall in that closet sparked and ignited paper and cardboard being stored below.”

Almost immediately after the first email from Fior was sent notifying students and parents, students began receiving emails from their teachers with Zoom links and further instructions. To some students, who had not been scheduled to attend class in person until after 11:50 am, this news of class beginning online at 8:30 am was less than an exciting development. Within that group, some students, unaware that they were supposed to be in class until they saw the updates when they woke up, missed the beginning of their day, asleep.

Additionally, some teachers, planning to come into school, found themselves without their chargers and others without their computers. Adapting, they found other ways to persevere with some even resorting to teaching on Zoom from their phones.

The story about the fire has not reached its conclusion. Repairs and restoration to the impacted part of the building are ongoing, questions about what the school will do to prevent further electrical problems remain, and how the fire will live on in Saint Ignatius history is still undetermined.

But to some of these further questions, answers are coming soon. As for how the fire will be remembered in Saint Ignatius’s history, it can be said that it will be remembered in a better light than if the situation had been worse. Thanks to the timing, the quick action by Campus Security and the school’s maintenance team, and the work of the firefighters, this story turned out to be a story of the successful combined efforts of diligent, dedicated, hard-working people, efforts which saved the Saint Ignatius High School Main Building from going up in flames.

All Photos Acquired By The Eye:

Timeline Of Events on February 25th:

6:30-6:58 am – Firefighters are on scene, contain the fire, and get the situation under control

6:58 am – The first email sent by Principal Dr. Fior notifying the school and canceling on-campus classes

7:04 am – The Eye picks up the story and begins collecting all known information

Before 8:00 am – BMS Cat arrived on campus to address the smell of smoke

~8:00 am – The process of cleaning out the building began

Special thanks to Officer Freddy Diaz, Officer John Nypaver, and Lt. Michael Norman for their contributions to this article.

The Eye is also in the process of setting up interviews with key campus personnel and is documenting the repair and restoration process.

This article will be updated with more quotes, pictures, and any other documentation of the fire that The Eye can acquire in the days and weeks ahead.

If you have anything that could contribute to the documentation of the 2021 Saint Ignatius fire, please contact The Eye at the email address eye@ignatius.edu. Thank you.