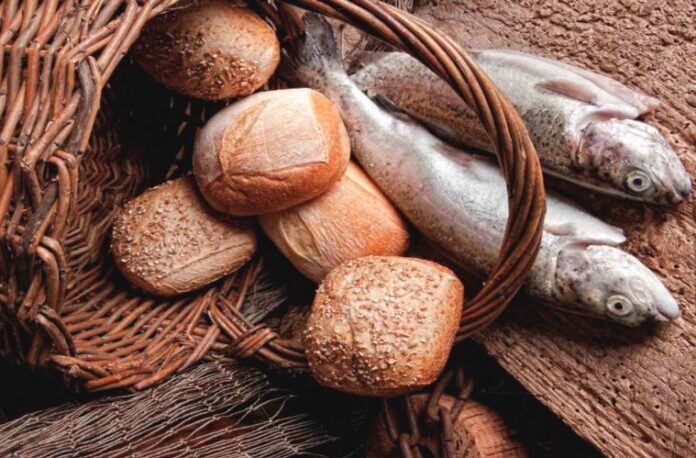 Over the past three weeks, this column has focused on each of the three pillars of Lent. The focuses of the last two weeks were fasting and then prayer. This week will conclude with almsgiving.

When his disciples told him to turn the masses away so that they could feed themselves, Jesus refused and instead fed the crowd that was said to be around 5,000 with five loaves of bread and two fish. After everyone was full, there were twelve baskets of food left.

Yet what Jesus did was not a supernatural phenomenon as you might be led to believe. Instead, what actually happened is that when Jesus shared the food that he had, enough other people in the crowd were compelled to share their food until no mouth was unfed. This story serves as an example of the immense power of sharing what we have with one another.

While we care for our relationships with ourselves and God through fasting and prayer, almsgiving is about caring for the people around us and particularly the people most in need of our love and care. We care by sharing what we have with them. There are many amazing things that we can all do to fulfill this pillar of Lent, which is arguably the most important of the three.

The first, and perhaps most obvious way, is to donate money. When deciding which charity or organization you would like to contribute to, making sure that you support the mission of the group and that the group is using the money effectively for its mission are both important. Websites such as Charity Navigator can help you do that.

But if you are looking for charities to give to, here are three local ones worth checking out:

Catholic Charities Diocese of Cleveland: Right now Catholic Charities is having its annual appeal, and every dollar we give will be matched. If you are looking for a charity with a broad impact, this charity does an incredible amount of good for Northeast Ohio serving 400,000+ people who are hungry, homeless, without employment, facing addictions, elderly and alone, and those with mental and physical disabilities each year. You can read hundreds of stories of the people served through this organization on their website.

The Metanoia Project: The Metanoia Project provides overnight respite to and care for our brothers and sisters without homes who would otherwise be staying in tents, doorways, alleyways, abandoned buildings, and other precarious environments during Cleveland’s treacherous winter months. If you are looking for a more targeted way to directly help those struggling the most among us, this could be the perfect charity for you to support. You can read about the history of The Metanoia Project here.

The West Side Catholic Center: Since 1977, the West Side Catholic Center (which is right across the street from Saint Ignatius) has offered hot meals, hospitality, clothing, and household goods, emergency services, advocacy, a family shelter, housing solutions, and workforce development training to those in need at no charge, regardless of religious affiliation. One part of the WSCC’s work is the Moriah House which gives a place to live to homeless female veterans and families facing economic hardship, physical and emotional trauma, chemical dependency, mental illness, physical illness, lack of education, or lack of employment.

There are countless other charities you can look into and give to. UNICEF‘s life-saving interventions and programs around the world have helped reduce the number of deaths among children under the age of 5 by more than 50% since 1990. WFP feeds starving children and families. Refugee Response helps refugee families right here in Northeast Ohio and the Malachi House helps those struggling financially at the end of their lives to die with dignity and comfort in a loving place. The Clean Air Task Force is a US-based charity that works to reduce air pollution and the Coalition for Rainforest Nations has stopped the equivalent of 8,628,471,593 tons of CO2 from going into the atmosphere. Just by giving them money, you can make a difference in the world, and that difference can be one that you want to see.

But we can do more than give money! We can also give our time and care to people who need it. Now more than ever, people are in need of that type of sharing. So a lot of good can come from sharing our time, care, and love with those in need. Even the smallest acts of kindness and generosity can go a very long way.

In our world today, there is plenty of food, shelter, wealth, and love to go around, just as there were plenty of loaves and fishes in the possession of members of Jesus’s crowd. But unlike in the story of the loaves and fish, so many people in our world go unfed, unhoused, poor, and unloved.

This Lent, through the pillar of almsgiving, we can work to change that through our own small miracles of sharing. Giving of what we own and giving of ourselves may not be easy. But at the end of the day, we must remember Jesus as our example, the man who not only shared his loaves and fish but gave the ultimate sacrifice of his life for each and every one of us.