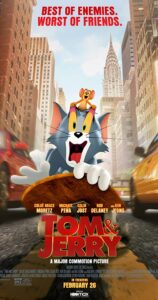 It is a tale as old as time: cat wants to eat mouse, mouse outsmarts cat. For over 80 years this story has been told over and over, taking the duo of Tom and Jerry to the strangest adventures out there, meeting classic characters such as Robin Hood, Willy Wonka, and even Sherlock Holmes. After so many adventures, it would be reasonable to ask where to take them next. Apparently, the answer is to a hotel for a predictable kids’ movie.

The main plot of the movie centers around the iconic duo and their hijinks at the Royal Gate Hotel, where new employee Kayla (who lied her way into her job) enlists the help of Tom to take care of a certain mouse in the hotel. As if this was not enough, the film decides to shoe in so many subplots that none of them have enough time to get the audience invested. Two celebrities plan for their wedding at the hotel, the bride has trouble communicating with her fiance, a hotel employee tries to catch Kayla in her lies, and Kayla falls in love with a hotel bartender; all these plots are thrown at the wall, and none of them really stick. They are not given enough time to be properly fleshed out, so when they are resolved in the end, nothing feels earned. The periods of “emotional conflict” are introduced and then solved within a few minutes.

However, nobody comes to Tom & Jerry for the plot. The hallmark of the franchise is its trademark humor. And this movie’s humor… has its moments. The classic slapstick is back and it works, period. Not all of it is laugh-out-loud hilarious, but most of it deserves a good chuckle and is reminiscent of the duo’s roots. Aside from that, however, very little lands. This movie was clearly made for young children, and the jokes are the most obvious indicator. The script is littered with pop culture references trying (and failing) to be “relatable”, poop jokes, and overall unfunny lines. Some of it works, though. Michael Peña plays Kayla’s manager and has a lot of great lines in the film, but even he comes with a couple of flops. The jokes overall are pretty hit-or-miss, with too many misses.

Overall, this movie was nothing special. It has many tropes of modern kids’ movies such as auto-tuned pop songs littered throughout, a celebrity cast to get parents interested, and references to modern trends. This movie is currently in theaters, and will be available on HBO Max from February 26 until March 26th. I watched it on HBO Max, and was thankful that I did not have to pay for a ticket. If you have a young sibling who wants some cartoons to watch for a while, this movie is a harmless distraction, but there is not a lot here for anyone older (and that’s coming from a 17-year-old who watches Phineas and Ferb on a regular basis).

5/10- unremarkable, but has its moments.