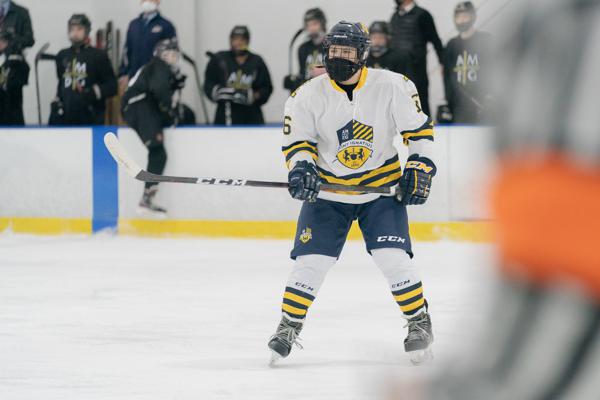 The Wildcats continue the winning streak as they advance in the OHSAA Playoffs after a 10-0 win over The Brooklyn Hurricanes.

It has been a long time coming for Five Ice-Cats to get their first varsity goal in the win. Junior Kevin Mays fed fellow linemate, Senior Brian Strick for Strick’s first goal of the year. Kevin Mays also notched his first in period one. Junior Logan Rechin, who was called up early in the season, also got one in his first playoff game as a Saint Ignatius Wildcat.

“The playoffs are a bit different this year because there aren’t as many fans,” says Strick. “We used that to our advantage, as we were able to communicate better, and we got the win.

Sophomore Ben Nadzam and Junior Quinn Tabol found the back of the net one time each as they also got their first varsity goals. This was an all-around team win for the Cats as they advance to play an excellent Olmsted Falls team Thursday at 5:30 p.m. in round two. Olmsted Falls pulled off the upset to beat Holy Name and play the Cats at John M. Coyne Rec Center. Tune in to The SIBN for Live coverage of the game, Go Cats!