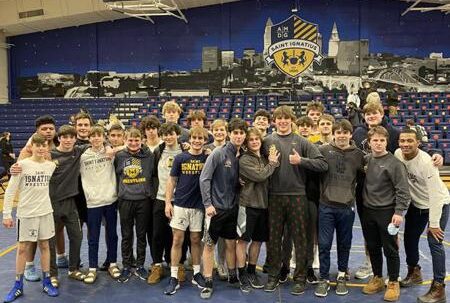 The Mat Cats geared up for Senior Night on Saturday in Sullivan Gym. This would mark the final match of the regular season and the last regular season match of the six seniors Calum Campoletti, Jack Bush, Anthony Santagata, Carter Zimmerman, Andrew Chime, and Grayson McLellan’s career, as they looked to cap their careers with wins.

Wrestling began at 6 p.m. against the Strongsville Stallions, following wrestling from the youth program, JV matches, and the senior night festivities.

As usual, the match kicked off at 106, and sophomore Mac Wright stepped out onto the mat to attempt to get the Cats going. Wright looked a little overmatched in the contest, as he was taken down quickly at the start of the first period and pinned soon after in 1:18.

Senior Grayson McLellan, ranked #7 coming into this match at 113, looked to earn the first senior victory. McLellan did just that in this match, completely dominating his opponent and living up to his high rank.

McLellan earned a takedown in seconds, immediately followed with two near-fall points. After riding his opponent out for a short time, McLellan put his Strongsville opponent on his back and got the pin in 55 seconds.

Next up at 120 was junior Joey Novak, who looked to keep the momentum established by Grayson rolling, and he did just that. Novak was able to take his opponent quickly and swiftly secured the fall for the Cats in 1:07.

Animal, also known as Ryan Putka, squared off with a tough-ranked Strongsville opponent at 126. The first period was all in favor of the Stallions, as Putka’s opponent earned an early takedown and three near-fall points. Putka started on top in the second but was reversed and surrendered two more near-fall points. Putka got two points back in the second with a reversal. In the third, Animal chose bottom and was able to escape, but was taken down soon after and was ridden the rest of the period to fall via significant decision 11-3.

Senior Captain Anthony Santagata was the second senior of the night to step onto the mat and kept the immaculate night for the seniors going. Santagata earned two takedowns in the first, giving up only one escape. In the second period, Santagata was on top and made two near-fall points before his opponent escaped, but he would take his opponent down again and finish the period on top. Santagata capped his stellar performance in the third with a reversal and three near-fall points, earning him the second senior win of the night and a significant decision by a score of 13-2.

The seniors’ dominance on their special night continued with Jack Bush at 138, as he wasted little time taking his opponent down in the first period and earning a pin in 49 seconds.

The night’s precise match came at 145, which saw Senior Calum Campoletti attempting to keep the seniors perfect against a tough-ranked Stallion opponent. The match overwhelmingly fell in favor of Strongsville at the start, as Campoletti was taken down and surrendered two near-fall points in the first. However, the tides turned in the second as Campoletti and his opponent traded reversals before his opponent escaped. In a defining moment of the season, Campoletti sent Sullivan Gym into a frenzy, as down 7-4, Campoletti hit his signature move, the gator roll, and secured the emphatic win with a fall in 2:50.

At 152 for the Cats, Sam Infante kept the Cats rolling with an early takedown followed by a swift pin in 1:07.

Second-year wrestler Victor Vyotskiy stepped out onto the mat for the Cats at 160, and inexperience hurt him in this match. Vyotskiy started well initially, earning two takedowns while giving up an escape and a reversal in the same period. In the second, however, jumping on top, Victor gave up an escape and a takedown before succumbing to a pin in 2:27 after a hard-fought battle.

Up next for the Cats was sophomore Jarell Young at 170. Jarell got the Cats back on track with an early takedown and a swift pin in 1:36.

Junior Mason Smart squared off with the Stallions at 182 and started the match like he was shot out of a cannon, earning a takedown and three near-fall points in the first period. However, after electing to go down in the second, Smart could not escape and was pinned in 3:27.

The Cats kept rolling at 195, as junior Patrick Clink showed up dominantly. Clink started the match with a takedown and three near-fall points before surrendering an escape. After this escape, Clink threw his opponent to his back and secured a 53-second pin.

Cayden Periandri suited up for the Cats in the penultimate match of the night for the Cats. The first period of this contest was fruitless, but Periandri was able to make a breakthrough in the second, earning a quick reversal before putting his opponent to his back and securing a pin for the Cats in 3:25.

The last match of the 2020-2021 regular season fell into Angelo Camargo’s hands at 285. Like the previous match of Periandri, the first period was scoreless other than Camargo earning a penalty point. However, in the second, Camargo also had a breakthrough, making an escape, a takedown, and eventually a pin in 3:20.

With that match, the team score settled out to 58-22 in favor of the Cats, giving the Cats their 18th win of the season, setting their final record at 18-3.

The seniors delivered perfectly on their special night, as those that wrestled went 4-0 in their matches.

Speaking for all of the parents, coaches, and wrestlers on this team, I want to personally thank this year’s seniors for everything they’ve done. Bush, Zim, Grayson, Santagata, and Campoletti, thank you all for what you’ve done for the team this year. Zim and Santa, thank you for leading the team. I know it wasn’t always easy, and it was hard to keep things serious this year. Still, from one captain’s eyes to two others, you guys did a fantastic job this year and helped everyone in the room grow into better wrestlers and better men. Grayson, Campo, and Bush; thank you guys for keeping the atmosphere of the room so special. You guys brought laughs, jokes, and fun to the room every day, and I know, especially for me, this helped me through the hard times I’ve gone through, and I know for a fact everyone else in the room feels the same. You guys were the main reason why this team was so special this year, and I hope you all will always remember the memories we made. I wish you all the best of luck as you move on to college, and I want you to know that I genuinely love all of you as brothers. Thank you.

With the regular season ended, the Cats now move on to the postseason. They travel to Strongsville High School for the sectional tournament this Saturday, the 27th. There will be split sessions for the sectional tournament, with 106-145 wrestling beginning at 9 a.m. and 152-285 beginning at 4:00 p.m. Information about streaming matches will be communicated soon. No spectators besides the parents of wrestlers will be allowed.

The Cats will look to match their stellar sectional performance last year, as they sent all 13 wrestlers that they brought to sectionals to districts. Senior captain Carter Zimmerman believes they can, as he says, “I think this team has a lot of potential, and I think we’re going to make a lot of noise this weekend.” Good luck this weekend, men, and Go Cats!