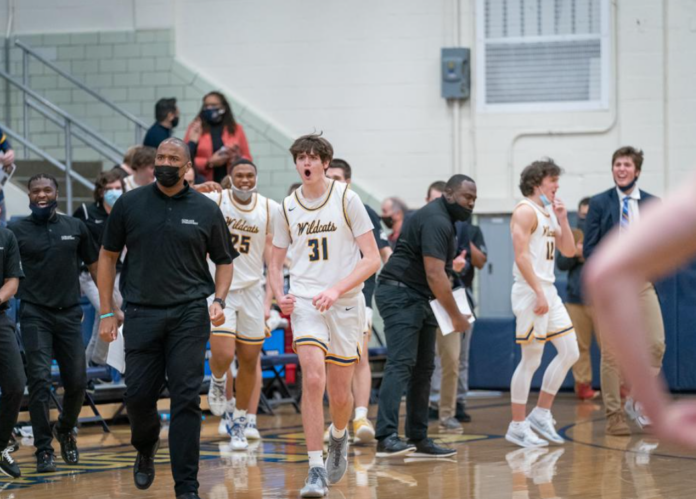 Following an intense night vs. the St. Edward Eagles, the Wildcats had another tough matchup the next evening. A road game against the only team to defeat St. Edward all year, the Shaker Raiders.

Coach Cam says, “Being on a winning streak, we only focus on the next game. This game against Shaker is the most important game to us, and we are going to play like it.”

The Wildcats owned the first few minutes in a give and take game. Mattimore fired a deep shot and connected to put the Wildcats on a 7-0 run. Kellon Smith and Jahdae Walker each tacked on two and forced a timeout for Coach Cam. Minutes of sloppy play allowed Cody Head to capitalize on Saint Ignatius’ woes with seven points. A 13-0 run now gave the Raiders a 13-7 lead. The quarter came to a close with a Raider lead 15-13.

Junior C.J. Yarian kicked off the quarter with a beautiful sequence and assisted for a Will Yontek bucket. The quarter continued to work for the big men as Senior Alex Garcia rained in a three. Yontek got it to go again and sent the Wildcats on a terror. Sophomore Braydyn Szczepaniak scored his first points in his first career start on varsity. Their 12-0 run gave Ignatius a 25-17 lead. After a technical foul was called on Little, Raynor brought the momentum back to Cleveland with a transition slam. Scoring for Danny Young was quiet, but a beautiful hesitation cross set up him for a solid bucket. Then, Young fired a deep stepback three and dropped it in, all net. The quarter closed with a 33-25 lead.

Shaker scored first early in the third, but the scoring didn’t come easy. Yontek was a force all night, and the Raiders had no solution. Suddenly, Little stormed inside with the blink of an eye and finished smoothly. A fast break play worked out nicely for the future Charger. Another post-move finish gave the Cats a double-digit lead. Danny Young picked off a pass and took a euro-step layup to a whole new level as he finished beautifully. Jahdae Walker added to the scoring burst and cut the lead substantially to 39-35 to close the quarter.

The Wildcats played sloppy early on in the quarter and gave up multiple turnovers. Unable to take advantage of the subpar Wildcat offense, Yontek ate up rebounds inside and finished with force on two straight possessions to give him 10 on the night. Multiple three-point attempts became the achilles heel for the Red Raiders. Cody Head did his work inside with a silky scoop layup over Henry Raynor. Szczepaniak continued to disrupt Shaker’s offense and put the game more and more out of reach. Cody Head laid in it again, but there wasn’t enough time for the Raiders to battle back.

That 52-39 victory put them at eight straight victories. Will Yontek dominated with 14 points, eight rebounds, and two blocks. Saint Ignatius will take the floor on Saturday at home against Rossford at 5 p.m. as their game vs. Bedford is canceled. The Wildcats also drew a top seed in the OHSAA Division I Playoffs. They will have an opening-round bye and host the winner of Parma/Twinsburg in the second round of the tournament.