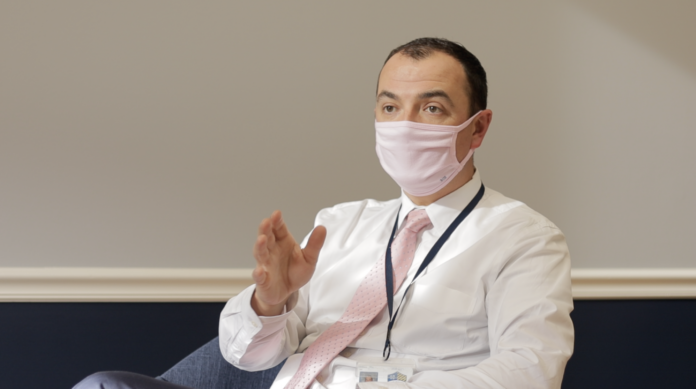 Last week, Cuyahoga County was one of just three counties in Ohio placed on the “watchlist” to go from Level 3 “Red” to Level 4 “Purple” on the state’s color-coded coronavirus risk advisory map due to a significant increase in cases within the county.

On the map, each county is given a color of yellow, orange, red, or purple based on its level of coronavirus incidence or the prominence of the virus in the area. On the scale, yellow is the lowest rating while purple represents the most severe exposure incidence within a county.

Thursday, Governor Mike DeWine updated the map and displayed Cuyahoga County remained in red. Despite this positive conclusion, to begin his press conference, DeWine noted there were a record 3,590 new coronavirus cases on Thursday signaling the fight against purple is not yet over for Cuyahoga County and others. As a result, many Saint Ignatius students and teachers still wait in anticipation to see if the school will close if the county does turn purple.

In emails to students and parents at the beginning of the year, Principal Dr. Anthony Fior outlined the administration’s policy based on various levels of incidence as shown in the illustration.

Additionally, Dr. Fior noted that if the school’s “internal number of students in quarantine are between 5-10% or if [the school’s] staff numbers rise above 15%,” then the school would shift to its Off Campus Schedule.

The Off Campus Schedule would entail students returning to their homes and being instructed virtually through live lectures on Zoom, pre-recorded videos, or other comparable methods.

This decision to go online if the county changes to purple, however, was made in a time of relatively high uncertainty of how going back to school would play out. Now, being eight weeks into the school year, Saint Ignatius has shown it can pass with few students testing positive for the coronavirus, although this does not guarantee these numbers capture every case.

According to Dr. Fior, 4 students tested positive for the coronavirus in the last week and a total of 28 are quarantined–less than 2% of the total student population. Knowing this, some question whether a shift to virtual learning would truly be necessary or if it would just initiate unneeded difficulties into the lives of students.

Junior Dominic Wilson was one advocate for this as he contended: “I believe that in person learning is the best course of action at this point in time for Saint Ignatius, due to the low numbers of cases that we have been experiencing, so long as we maintain our level of vigilance in dealing with this virus.”

Not all students feel this way, however. As noted in an article showing the perspective of a distanced learner, an estimated 70 students opted to learn online and have been doing so since the beginning of the year. Since then, cases in Ohio have risen dramatically so it is without a doubt that many students are reconsidering their choice to join classes in-person.

Following a question of whether the previous given coronavirus policy would be followed, Dr. Fior responded: “I think one of the things that we have to remind ourselves is we’ve learned a lot about the virus from where we were in March. We knew more in the summer than we did last March. We know more now in October than we did in August when we made our original plans. We know that schools are not super-spreaders.”

Such a reply hints a change to policy could be possible given the new information the school has learned throughout the year. Dr. Fior was not definitive in such a decision, however, as he noted “we constantly consult with our medical team, the Diocese of Cleveland, other private schools, we are in dialogue with other principals, and we look at our internal numbers.”

Upon further questioning, Dr. Fior added that the administration was also awaiting the governor’s message to choose a course of action. A clear direction is unlikely to come from Columbus, however. In a press briefing yesterday, Governor DeWine told reporters “we will not issue any orders tomorrow about the closure of schools,” signaling that the decision will be up to schools just as it has been.

In explaining this logic, DeWine highlighted the importance of looking at local levels and “zip codes” of coronavirus infection to inform decisions. This task is no easy one for Saint Ignatius, though, as its students come from over 95 cities across Northeast Ohio. Nonetheless, the data proving internal spread can stay low is a solid indicator of whether school should remain in-person.

In general, Dr. Fior expressed a cautious interest in remaining on campus as he said “I do not want to be the principal who tells the soccer team or the cross country team that you’re in the middle of the playoffs and guess what guys you can’t compete?” Despite that desire, he still held that the ultimate goal was to “protect, and look out for the health and wellbeing of our community as best we can,” displaying an internal conflict to do what is best.

To hammer in safety, Dr. Fior pushed for steady and even increased vigilance when it comes to the wearing of masks as he called doing so “an act of charity” and asked for “gentle reminders” to be given to those who may forget to adhere to protocols. He said this was especially important now as cases are rising and it is ultimately the “small act of wearing a mask” that has allowed Ignatians to stay on campus up until now.

Despite these precautions, the future remains uncertain and it could take just one event or action to change the course of the rest of the school year. Nonetheless, based on the interview with Dr. Fior and other communications from the school, the current plan of action is to make a shift to virtual learning if the county goes purple, but a policy change is also always possible.