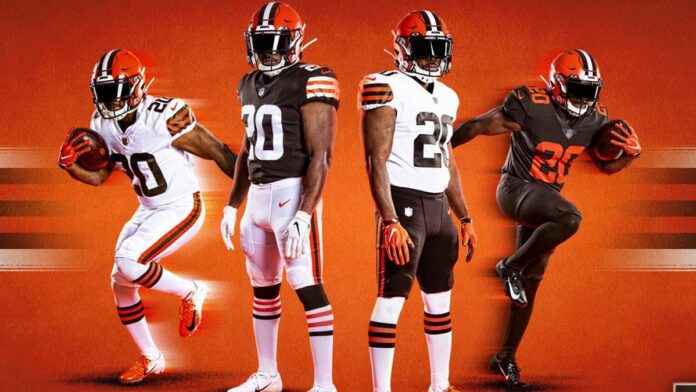 Five years ago the Browns introduced new uniforms that were completely different from any other NFL uniform ever worn. They were made to bring in the new era of Browns football that would be different from the Browns of the 2000’s and the early 2010’s. These uniforms would be worn by the new Browns dynasty in the making. Johnny Manziel, Travis Benjamin, Duke Johnson, Josh Gordon, and Andrew Hawkins on offense, alongside Jabaal Sheard, Jordan Poyer, Barkevious Mingo, and Danny Shelton making up the young core of Browns players that would win Super Bowls in the future. Just like Manziel, Mingo, and Gordon, the uniforms were an atrocity. The numbers on the white and brown jerseys were orange, an enormous “CLEVELAND” was written across the chest, and the word “BROWNS” was written on the leg and cut off the stripe. They were the last things that fans would expect the Browns to wear. The flashiness, along with many other factors, made the Browns uniforms the worst in the history of the NFL. During the five years of these uniforms being worn, the Browns dealt with Johnny Manziel, Hugh Jackson, 0-16, 1-15, Freddie Kitchens, and lots of drama in the locker room. All of that, along with a huge struggle for power amongst the multiple general managers, coaches, and the Haslams. They were by far the worst five years in franchise history. 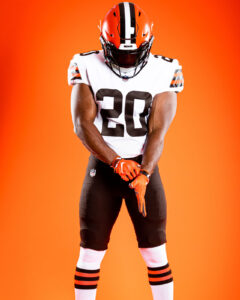 With new management and a lineup that is good enough to contend with top-notch programs, Jimmy and Dee Haslam knew it was time to get rid of the uniforms. Rather than looking into the future for the next best thing, the organization created the new uniforms by looking at the past. They looked at the great teams of the 1960’s and 1980’s. They want fans that are over 30 to look at the uniforms and remember going to the old Municipal Stadium with their dads, watching Bernie Kosar, Ozzie Newsome, and Clay Matthews. They want to pay tribute to the teams of the 1960’s, and make fans think of Jim Brown, Otto Graham, and Lou Groza. Before the modernization of the uniforms five years ago, the organization prided itself of being simple. The team’s uniforms were simple and old school: the logo of the team is a basic helmet, the team’s wording is not in any fancy font, but in simple, block lettering. The organization branded the Browns in the most basic way possible, and it worked. The uniform change five years ago got rid of almost everything that made the Browns what they were. The new uniforms bring back the charm that the Browns have, and represent the blue-collared city of Cleveland. Like the Packers, Bears, Colts, Cowboys, and Steelers, the Browns are a historic franchise, and the uniforms should never change because they are classic.

Along with the classic home and away uniforms that the team brought back, they introduced a new alternate uniform with brown pants, which looks nice. They also removed the stripes from the color rush uniform. Personally, I think that uniform should have been left alone, but the new uniform still looks really cool. One thing I would have also liked to see was an alternate orange uniform. I’m not the biggest fan of an orange jersey, but wearing an all orange uniform once a year, and maybe doing something extra by marketing an orange week, would have been nice to see. Alternate orange pants, like the pants that were worn by Brian Sipe would have been cool to look at with the home and away jerseys on a rare occasion. Regardless of what I think, the changes that the organization needed to make were made. The Browns look like the Browns again. The new uniforms look fantastic and will be enjoyed by Browns fans for years to come.