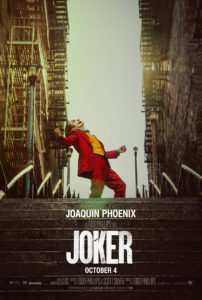 In 1989, they dropped Jack Nicholson into a vat of chemicals and turned him into a clown crime lord. Nineteen years later, Heath Ledger took a turn at the iconic role and gave viewers one of the most compelling performances in a superhero movie ever. Today, Joaquin Phoenix takes on the role of the Joker with a performance to rival Ledger’s, focusing more on the insane aspect of the character. This movie isn’t just your average comic book movie. The film focuses minimally on the Joker’s dynamic with Batman, a massive difference from past incarnations of the character.

The film focuses on Arthur Fleck, a mentally ill man, and his journey to insanity (which leads him to become the deranged villain known as the Joker). Unlike most superhero movies, the few fight scenes in the movie are dark and gritty as opposed to the typical superhero movie’s blown up and massive scale battles. The character-driven writing, compelling cinematography, and surprising direction of Todd Phillips (commonly known for directing The Hangover trilogy) create one of the best movies of 2019. The film does a great job in its turn of bringing one of the most iconic super villains in pop culture to life.

Moreover, this film does a great deal for comic book movies in the future. The success of the Joker exhibits that comic book movies don’t necessarily need high budget action sequences to entertain the audience. On top of that, the film portrays the role of mental illness in someone’s life, and the pain and suffering that follow you around daily.