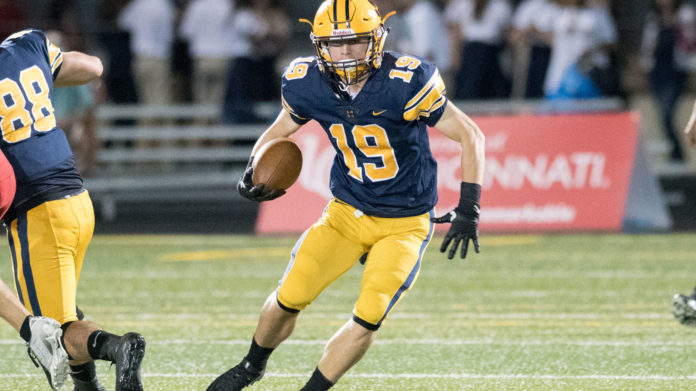 Started in 1958, the Wirtz Athlete of the Year Award is given out annually to a senior multi-sport athlete that has made a significant contribution to his teams. The award is named after legendary coach John J. Wirtz. From 1948-1976, Wirtz served as the athletic director, head football coach, head basketball coach, and head baseball coach. As the head football coach Wirtz had a 146-40-6 record with ten league championships and four city championships. As a basketball coach, his record was 277-90, and he won eight league championships, one city title, and in 1953, the team finished Class A State Semifinalists. He coached baseball for three years and won forty games while winning two city championships. In 1974, he was inducted into the Ohio High School Football Coaches Association Hall of Fame.

The athletes that are considered for the award every year are nominated by their coaches and the winner is chosen by the student body. Other requirements for the award are that the athlete must be academically eligible all four years of high school, must be coachable, must show dedication and leadership, and must be a man for others. Some notable people who have won this award are former Cleveland Indian and former commentator for the Indians Mike Hegan, who won it in 1960, former Ohio State fullback and current assistant principal of Saint Ignatius High School Ryan Franzinger, who won it in 2002, and former NFL wide receiver and current U.S. congressman Anthony Gonzalez, who won the award in 2003. Last year, the award was won by Bain Kurtz.  A formal presentation of the award takes place at a home basketball game in December every year.

This year the sixty first winner of the Wirtz Athlete of the Year is Nate Conry. Nate Conry has shown his athletic talents as a wide receiver on the football team and as an attacker on the lacrosse team. He has made a significant impact on the field his senior year of football and has shined as an elite prep lacrosse player for the last three years. Conry has not only been a great athlete. He is a great teammate and has truly been a man for others on and off the field. He is also above average academically, possessing a 3.78 GPA.

Conry had an impressive senior year playing football. He racked in fifteen catches for a total of 234 yards and scored one touchdown in the process.

For the last three years, Conry has dominated the lacrosse field. His sophomore year, he fourteen goals and had six assists. As a Junior, Conry had an outstanding season, scoring a whopping forty two goals with twenty six assists and twenty three ground balls. So far for this season, Conry has scored twenty goals while getting fifteen assists and fielding thirty nine ground balls. When asked about Nate, Coach Mason Wynocker said: “He is one of the best athletes and best lacrosse players ever to come through the Ignatius program and has been a significant contributor to the team the last few years.” He then went on to talk about Nate’s unselfishness, and the Ignatius mentality that he possesses, saying: “It is rare to have one of your most talented players be so unselfish as demonstrated by his ability to do what we ask him to do without any objections. Some games we ask him to play attack and some games we ask him to play middie depending on matchups or injuries. Many games he plays both. His response to the moves is always that he will play wherever we want him.” Coach Wynocker is confident about Nate and his future as a lacrosse player. “I am expecting great things from Nate in our playoff run and also expect him to have great success at the college level.” Nate, like coach Wynocker, expects the Ignatius lacrosse team to make a deep playoff push and hopefully win the first state championship in program history.

Next year, Conry plans on playing lacrosse at Canisius College. Conry knew being a Golden Griffin was right for him when he saw that Canisius offered great academics, fantastic networking opportunities, and of course, an opportunity to play Division I lacrosse. Canisius is certainly the best landing spot for Conry. Nate’s ability to be a great teammate, a smart student, and an outstanding athlete definitely make him worthy of being named this year’s Wirtz Athlete of the Year.