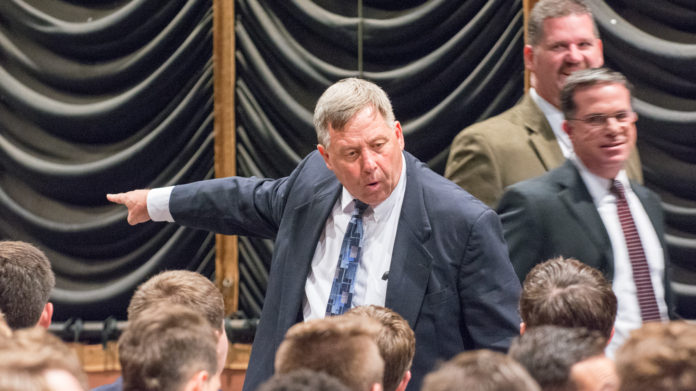 Mr. Michals will be dearly missed by his beloved family. He and his wife Donna raised three children–Maggie, Jack ‘15, and Danny ‘17. Mr. Michals’ commitment to education in faith shined through as he sent all three of his children to Catholic schools.

Mr. Michals’ passion for athletics began at an early age. During his high school years at Cathedral Latin, Mr. Michals played varsity football, basketball, and baseball. He continued to play football at Ohio Wesleyan University after graduating from Cathedral Latin in 1970.

In fact, he excelled at the sport. At Latin, he played fullback for the varsity football team for three years, and he was co-caption of the team during his senior year. At Ohio Wesleyan, Mr. Michals earned All-OAC honoree status, led the team as co-captain, and led the team in total rushing yards. He even played in an NCAA DIII National Championship game. Because of his achievements, he was inducted into the Cathedral Latin Alumni Association Athletic Hall of Fame in 2004.

However, he found his home when he started at Saint Ignatius High School. Here, he built connections with students and colleagues. He gave up himself for the betterment of not only the physical education program but the school as a whole. Just about every day, he stayed after school to ensure students could use the gym to play basketball or participate in intramural sports. Even when he became sick, he still dedicated himself to working and spending time with students and coworkers.

Simply passing by Mr. Michals in the halls was an inspiration, knowing that despite his illness, he still came to school because there was work that needed to be done. Earlier this year, I passed him in the hallway twice in one day. The first time, he gave me a friendly hello. The second time, he said, “I must be doing something right that let me run into you twice in the same day!” His comments such as this left me with a smile on my face.

As a student of Mr. Michals, I can say that he taught more than simple physical education. He taught us all one of the key aspects of being a man for others.

Matthew Isaac ‘19 explained this aspect clearly. “After a freshman year P.E. class, I asked [Mr. Michals] why the socks we wore mattered,” referencing the strict rule of students having to wear plain black or white socks. “He quickly replied, ‘If we don’t teach you to do the little things right, how will you learn to do the big things right?’ He was just a phenomenal teacher. Rest in peace, Mr. Michals.”

Mr. Michals taught lessons that will stick with all of his students throughout their lives–to follow the rules, to treat others with respect, and to strive to do our best at whatever we do. Just exactly how did he teach such important lessons? Essentially, he held us accountable. If we made a mistake, we had to admit to such mistake and face the consequences. However, by the end of a semester with Mr. Michals, students got surprisingly good at following the rules.

Mr. Michals will certainly be missed on the Saint Ignatius campus. Sure, he taught physical education and health, but anybody who knew him personally knows that he taught much more than those subjects. He played a huge part in making his students men for others.