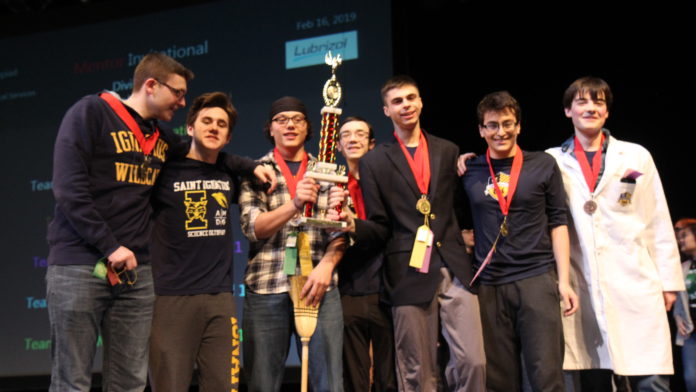 I hope you enjoyed the long weekend. Here’s the sports section and an update from Science Olympiad.

Wrestling: The MatCats competed in their final dual of the season over the weekend. They bested the Strongsville Mustangs 54-21. They’ll begin their postseason journey this weekend as they compete at sectionals at Brecksville High School.

Basketball: On Friday night, the Cats hosted Cathedral Prep from PA. It was a close game all the way, but at the end, Chase Toppin hit a buzzer beating layup to lift the cats to victory 64-63. Freshman Jonathan Effertz contributed 18 points in his first career varsity start. This win pushed the Cats’ win-streak to 8 games as we are nearing the playoffs. The Basketball Cats need you on Friday at 7:00 pm in the Sullivan gym to say goodbye to this terrific senior class on senior night.

Swimming/Diving: The Swimming and Diving team had a bountiful amount of good performances this past weekend at Districts. For diving, Will Claus took the hot seat as he placed first overall in the district and will move on to states. Noah Keim placed 9th showing an immense amount of improvement from last year. The Swimming portion began at an amazing point with the medley. The medley, consisted of Tyler Hong, Nicholas Hong, Joseph Richmond, and John Soeder out-touched Saint Francis with a time of 1:33.58 with which they will move on to states, seeded 6th. The young 200 free relay of Will Van De Walle, Micah Murtha, Thomas Metz, and John Soeder placed 2nd which will send them down to states. The same is true for the 400 free relay, also placing second and going down to states. This relay consisted of John Soeder, Tyler Hong, Joseph Richmond, and Daemyen Haywood. The swim team also is sending 3 individuals down to states. Nicholas Hong will move on in the 100 breast while his younger brother Tyler Hong will move on in the 200 IM and 100 back. Joseph Richmond will advance in the 500 free. Overall, the team placed 2nd at districts but is ready to take on States this Friday and Saturday in Canton.

Hockey: The Hockey team came out of the weekend with a dominant win over Brecksville, beating the Bees 10-0. The team looks to keep the energy up and the win streak going when they play Midview tomorrow at 5:30.

Bowling: The team did not advance, however, senior Vinny Doran advanced as an individual to districts this Sunday. The team appreciates all the support this season, and wants to thank seniors Alex Gehrlein and Vinny Doran for their efforts over the past 4 years.

Science Olympiad: Over the weekend, the Science Olympiad team competed at Mentor high school against 42 teams. The Wildcats took 1st place overall as a teamand won the invitational. Below are all the events that placed. Some pictures from the tournament are attached at the end of the email, courtesy of Jason Zhang.

Senior Quote: “It’s just me and my Burt’s Bees against the world” – Aidan Schwind

BLOOD DRIVE REGISTRATION:  Attention students 16 years of age or older…the next blood drive will be Thursday February 21st in the Breen Center lobby. Registration for donors will take place February 14th, 15th, 19th and 20th outside the senior lounge during periods 4-7. Be a Man for Others and help save lives with your donation.

CAREER SPEAKER SERIES:  David Meler ’14 will be the speaker for our Career Series during 5th and 6th periods in the Alumni Room. Mr. Meler graduated in 2018 from Creighton University, with a major in Finance and minor in Health Care Administration. Soon after graduating Creighton he joined Skylight Financial Group as a Financial Professional. Working in Ohio City, he remains involved with the Saint Ignatius Community as a Cross Country Coach, Labre Adult Moderator, and Young Alumni Committee member. Pizza will be served. If you are interested, please sign up. If you have class during 5th or 6th periods, you must get your teacher’s permission to attend.

THE PRE-MED SOCIETY will be having a meeting after school in room 303 of the Science Building  We will be welcoming our eighth presenter of the Annual Speaker Series, Ken Koncilja ’05, discussing Geriatric Medicine.  All are welcome and encouraged to attend.  Please, note the meeting will be in ROOM 303.