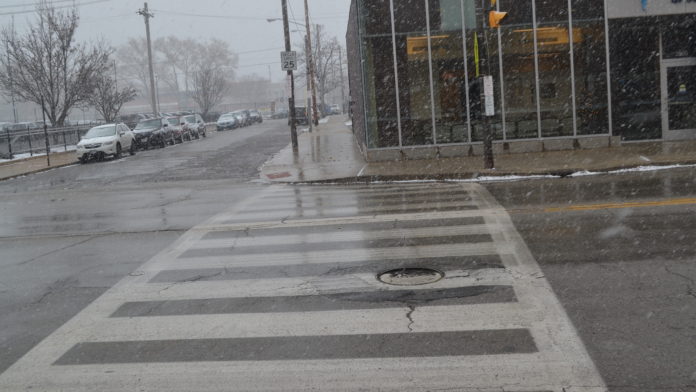 As a soon to be new driver I am becoming more and more aware of my “street” surroundings, and I think we can do better with the crosswalk between Murphy Gym and West 29th Street by the student parking lot. Although this crosswalk has markings on the road and a flashing yellow light, it is in the midst of a lot of other distractions and it doesn’t necessarily compel a driver to always stop. My mom complains every time she drops me off at school about how that crosswalk signal just “appears from behind a big tree” with very little time to stop.

So I decided to look at it, and yes, it is especially confusing because there is a stop light immediately before and another just after, where people know they NEED to stop and another flashing yellow light indicating the school zone just before this crosswalk that is indicating to ‘slow down,’ whatever that means.

The problem as I see it with this crosswalk is that the only time cars need to stop is if there is someone walking in the crosswalk. We have 4 lanes of very busy traffic and studies have shown that “walkers” are often overly confident that the cars will stop, simply because there is a crosswalk and assume that the cars will see the crosswalk and stop if a student is there. Other studies have shown that the pedestrian is hit in the third or fourth lane just before they reach the end because they made a bad estimate of oncoming traffic. From what I see, there are several things that can be done to make this crosswalk safer. First of all, can’t we at least do something about that tree, which is conveniently right in front of the sign signaling to slow down? Secondly,what about some type of overhead sign that signals a crosswalk or a flashing red light that a pedestrian could activate as they cross the street.

People become immune to a constantly flashing light, especially if it is amber (yellow). If the overhead light only started flashing when a student was crossing the street, it would be more noticeable to the driver in the car.

There are a lot of ways to improve the visibility of crosswalks. From my parents’ favorite: having a flag to wave while you cross the street, or a more realistic option which uses an overhead or curbside sign to signal only when a person is crossing the street. We could even just remove that crosswalk entirely. There are many other options as well, but those are just a few examples.

If you’re still reading at this point, you should go check out the crosswalk for yourself (the one by Wasmer), and get your own opinion on it. I think more people than you would expect, mostly parents like mine, would have a positive reaction towards an upgrade to what is ultimately their children’s safety. Let’s make the change before it’s too late.