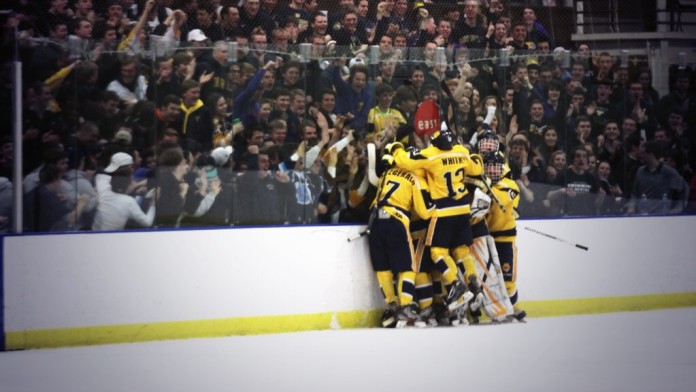 The Ice Cats are just beginning their season this year. After just winning three consecutive state championship titles over the past three years, they continue to skate ahead to their goal of a fourth. The Wildcats are in good shape already, off to a 5-1 start as of press time.

Saint Ignatius has two teams playing very competitive schedules –the Prep Team and Varsity Blue Team. Head Coach Pat O’Rourke ’90 says the Prep Team, “will play a tough schedule once again. We enjoy playing the best teams from around the region and seeing where we stack up. This year, we’ll be playing a lot of teams from Pittsburgh, Detroit, and Ontario.”

The Cats have a strong goaltending group composed of senior Benny Savarino and juniors Zak Kovatch and Connor Francz. The defensemen are sturdy, too, led by seniors Aedan Conway, Charlie Ellis, and Patrick Eppich, as well as juniors Greg Langermeier, Clay Gazdak, and Charlie Erbs, and sophomore Aidan Conway. At forward, the Wildcats have plenty of scoring power with seniors Connor McGowan, Eric Lile, Charlie Klenkar, and David Strick.

“All in all, it’s a good team full of nice kids who are hoping to make history by winning their fourth straight state championship, something that has never been done in Ohio,” O’Rourke said.