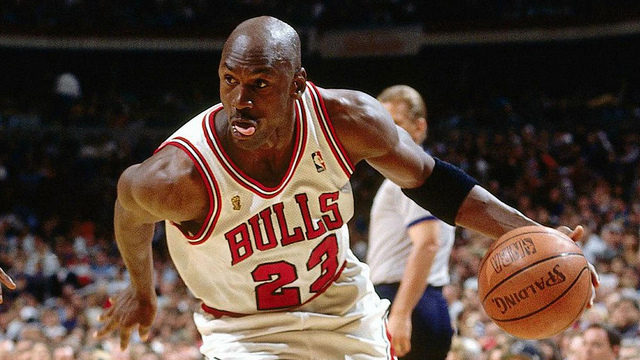 Right when you read this title in your head you thought, “FALSE! LEBRON’S THE GOAT!!” Now, before you move on to the next article of this wonderful school newspaper, hear me out: Michael Jordan is the greatest to ever do it.

I am not belittling LeBron—he is a once in a generation player and is undoubtedly second on my list. But I must ask you: what is the game of basketball? Basketball is putting the ball through the net in any legal way possible while stopping your opponent from doing the same. Jordan is undeniably best at this.

Jordan played in the NBA a total of fifteen years, the last two as a veteran after taking three years off. In the thirteen years before his break, Jordan accumulated the follow-ing major awards: 10x Scoring Champion, 9x All-Defensive 1st Team, 11x All-NBA (10 of which were 1st Team), 6x NBA Champion (all of which he won Finals MVP), 5x NBA MVP, and NBA Defensive Player of the Year. He was and still is comprehensively the best at what basketball is on a fundamental level.

The only thing LeBron is objectively better at than Jordan is passing—I’ll give you that. LeBron is a certified DIMER (though still aver-ages only two more assists per game over his career).

You may say, “WRONG! REBOUNDING TOO!!” but this is again false. LeBron plays small forward, a position that generally guards people driving to the basket, and is closer to the basket on shots than Jordan, a shooting guard, would be, giving him a better position to clean the glass. Combine this with two inches and thirty-five pounds on Jordan, and you’re looking at a player that should have a significant rebounding advantage. However, over his career, LeBron only averages one rebound more than Jordan—clearly not enough to be objectively considered a better rebounder.

Next there is scoring and defending, in case the awards didn’t do it for you. Jordan played in the hand-check era (the era in which impeding the offensive player’s progress through the use of your hands or fore arms was still legal), making scoring and offense in general much tougher, especially inside the arc. For Jordan, predominantly a driver and mid-range shooter, to average 30 points over his career (LeBron has only averaged 30 TWICE to Mike’s EIGHT), mainly from inside the arc while getting hand-checked the whole time, is incredible. Put him in today’s era with this rule change and I wouldn’t be surprised if he averaged 40 (heck, he already averaged 37 in ‘87). LeBron, even more predominantly a driver, gets to the rim effortlessly because with hand-checking outlawed, his sheer size and strength is unstoppable with a head of steam.

As for defense, Jordan was one of the toughest wing defenders ever. He played defense like it was his specialty, practically always outscoring his opponent by a large margin. While LeBron can put up great numbers, take a look at who he guards next time you watch him (For reference, Kevin Durant averaged 29 on him the last two finals); chances are it’s almost as much as him. Defense is not defined by chase-down blocks (and in case you think it is, their career blocks per game average is the exact same, despite the height difference). Watch him on-ball. Likely, he’ll get burned; he stopped playing defense years ago. Finally, winning. 6-for-6 vs 3-for-9.