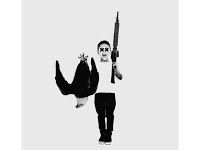 a modern tragedy, vol. 1 is Canadian-American artist grandson’s debut album, loaded with plenty of politically charged lyrics. grandson first found mainstream success with the single “Blood // Water.” After signing to RCA, and later Fueled By Ramen, in 2017, grandson began production of the album which was released June of 2018.

The EP features only 5 tracks, however, those 5 tracks pack a punch. Each track specifically tries to call-out issues that plague society, such as the song “6:00” which criticizes the motives and practices of news organizations. Because of these messages it becomes more difficult for some of the songs to find mainstream success.

Stylistically, a modern tragedy, vol.1 is very much an alternative EP with influences of electronic and hints of grunge spaced throughout. This is not an EP you’ll find hitting the top of the charts (with good reason considering current music trends), but it isn’t meant to be chart topper. I highly recommend giving the EP a chance.