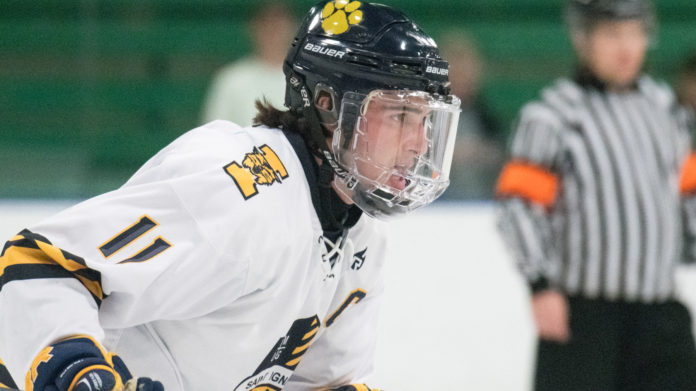 As you walk through the Hall of Fame Hallway, you see the many faces and accomplishments of outstanding athletes in the illustrious history of Saint Ignatius High School. Today, another legend is born. Senior Bain Kurtz is your Wirtz Athlete of the Year for the class of 2018.

The Wirtz Athlete of the Year Award, named after John Wirtz (the legendary former Saint Ignatius athletic director head coach of the football, track, basketball, and baseball teams) goes to a student that exemplifies being an Ignatian on and off the pitch. 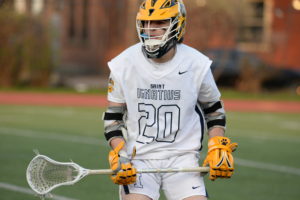 Bain is now in an elite category of athletes from Saint Ignatius. From Brian Dowling to Ryan Franzinger, Oliver Luck to Drew Haddad, and Jimmy Berger to Matt Wiegandt, Kurtz will go down in Saint Ignatius history.

The three-time state hockey champion and hockey captain will attend Miami University next year. “Big-Game Bain” is a master of the offensive end, using his skills on both the ice rink and lax pitch.

For the hockey team, Bain served as captain and an offensive juggernaut. His efforts earned him an All-State honorable mention and recognition around the Ohio game.

“You can’t always count on everyone to show up in those games,” said Head Coach Pat O’Rourke ‘90. “But we could pencil Bain in for a big goal, a big hit, some sandpaper in his game, and some vocal leadership every time.”

Bain is not only known for his three big rings, but also for his hat trick in the OHSAA State Semifinal, famously “shushing” the away crowd. Kurtz also scored the game-winning goal in the 2017 OHSAA State Semifinal during his junior year. Kurtz tallied the clincher just 11 seconds into the third overtime vs. University School.

Over the course of his three seasons, Bain notched 48 goals and 48 assists, along with a record of 96-18-4 in his career on the ice. Coach O’Rourke had high praise for his captain, “He showed up in every big game he ever played.” 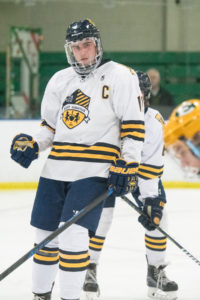 Just shy of 100 varsity wins, Bain looks back on his fondest memories.

“Being a captain with Michael McCaffrey while winning it in our last year together was unbelievable,” Kurtz said. “My favorite play had to be scoring the game-winner against US in 3 OT last year in the State Semifinal.”

As an offensive facilitator, Kurtz uses a variety of ways to beat defenders for the lacrosse team. With six goals and six assists and twenty ground balls this year already, Bain has been a huge offensive threat by being a sort of unofficial “point guard” for the team.

“Bain is a player you want on the field with the game on the line, because he is fearless. The fear of failure is not part of his personality.”

“Bainer is a leader on the field with his hustle and heart,” Boehm said. “He hates losing as much as anyone in the program and we can always count on him to make a key play when we are in big games.” 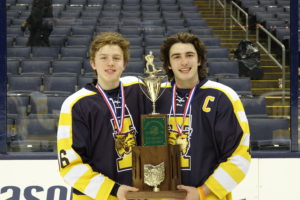 On top of all of this, the rings, the goals, and the unquestionable desire to be his best, Bain goes above and beyond of what a normal athlete does. As a student, he maintained exceptional grades and participated regularly in service. Kurtz took part in a mission trip to the Dominican Republic junior year, and was a vital part of the Bone Marrow drive this last spring.

“Bain is a good student, well-rounded, charitable, and funny. He is your classic Saint Ignatius student,” said Coach O’Rourke.

Kurtz is grateful for the Wirtz award recognition and for all of his supporters along the way.

“I’d like to thank my parents, coaches, and teammates for always dealing with me throughout these four years and always looking out for me,” Kurtz said.