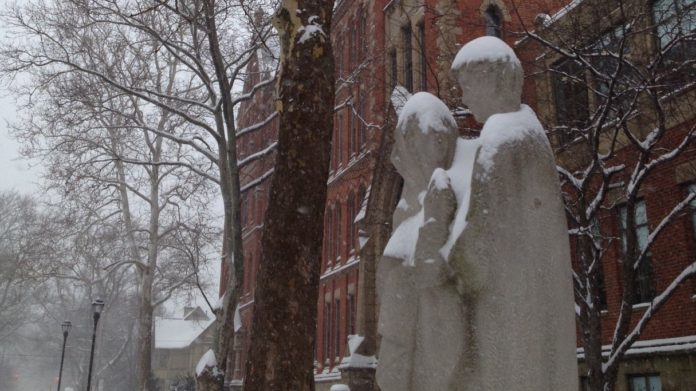 In Cleveland Ohio, winters filled with large snow storms, sporadic weather, and random ice days, make life difficult for Ignatius students. Even the largest and toughest cars parked in the senior lot at West 30th and Lorain at Saint Ignatius sometimes struggle. Yet, it could be said that one side of town gets put on blast every time our lady lake brings in snow flurries from the north. The east side, known for its large variety of shopping complexes, Paul Noce’s house, and beautiful metroparks, is often a receiver of a large amount of snow, much greater than that of its westside counterpart.

Approximately 29 percent of Saint Ignatius’s student body lives on the east side. Split between 3 sides, this roughly accounts for ⅓ of the student body. Usually what happens during a large snow shower day, roads are slippery, cars are slow, and morning commutes at least double. East side schools like Lake Catholic, NDCL, and Beaumont on these days get called off for their students’ safety. Matt Christopher, a senior from NDCL, talks about his tough drives into school: “When the roads get bad, I see kids in ditches and I also see them on top of hills unable to move, cause me to swerve around them. I’m always very nervous that these factors can cause me to get hurt or even worse cause fatal injuries.” With these tough conditions, these east side schools are often called off during these extremely dangerous times. Yet their buddies at Wildcat High, must warm up their car fifteen minutes early, wipe off the car, and make the boldacious commute.

Now the real question that impedes is: why do east siders have to make bigger risks than that of other wildcat students to get to school? Could it be because that the administration lives more west? Would things be different if the school staff lived mostly east side? Does the school believe that it must affect a larger percent of its students to call school off?

East siders hope that this article can start a conversation. Alex Misencik ‘18 says “It usually takes me 20-25 minutes to get to school, and some days when school is on and it’s snowing it’ll take me up to one hour and twenty. Aslo, impeach Abdelnour.”
Adding on, rugby captain and Chesterland native Nick Zolikoff ‘18 says “you can’t take a test if you can’t get there.”

These rough rides, filled with big accidents, unnecessary cautious drivers, and those “hold steady (insert original car name)”, make students dream for snowdays. Many of which never come. Ignatius has been famous for no snow days for centuries. Is it time to change that? What will convince the school that it is truly dangerous? Will a big accident need to happen involving students make it change?

On the other side, the administration stresses that if you feel unsafe traveling to school due to snow, stay home and don’t drive. The school does not want any danger imposed on any student.

However, some students or student’s parents would rather risk their lives than miss a day of school. Thus starting an internal war of every student east of the Keybank Tower.

At the End of the Day, the Most Important Lenten Pillar Is…