Let’s face it. The Cleveland Cavaliers are not getting any younger. As the NBA season continues to progress at a leisurely pace, our hometown team sits at a surprising 3rd place position in the Eastern Conference. They find themselves behind the infamous Boston Celtics, led by former Cavaliers point guard Kyrie Irving, as well as the Toronto Raptors, who boast an All-Star backcourt in Lowry and Derozan. Because we have the best player in the world who is complemented by capable all-stars, such as Love and Thomas, basketball fans begin to wonder why it is we are struggling. Is it our coaching? Is Lebron too controlling? Is our veteran presence too weak? The amount of questions raised makes it seem as if our season is a reality TV show, nothing short of a rocky roller coaster ride. However, this all-star break as well as the trade deadline could symbolize a fresh start for the Cavs, as the players have the distinct opportunity of an extended rest period. Additionally, the front office can purge the franchise of any player that fails to perform to their lofty contracts, a.k.a JR Smith and Tristan Thompson. Recently, we have heard the Cavaliers express their interest in franchise cornerstones, George Hill from the Sacramento Kings and DeAndre Jordan from the Los Angeles Clippers. The solution to our poor 1st half is simple: adjust the roster to compete with the Golden State Warriors. The common preconception that our season as well as our playoff push is a race with the Bay Area squad is true, especially since Kevin Durant joined the rivalry. How can we compete with them, you ask? The Cavaliers need to shift their scope toward supplementing the lineups with speed and length. In order to compete with the Warrior’s high-powered offense, they must add “3 and d” guards, such as George Hill, to contain Curry and Thompson. The “small ball” lineups can help defend their three point attack and preference towards the fast break. The league appears as if it is being dominated by the likes of the Warriors, as all teams are making adjustments just to defeat them. I see no better team to reverse this trend than our very own Cleveland Cavaliers. 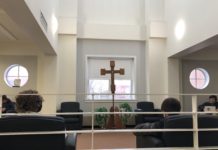