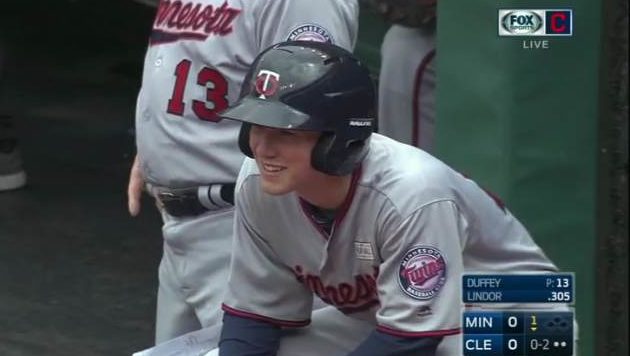 This year the world, and especially Cleveland, has been watching success of the Cleveland Indians closely over the past season. Now imagine watching each game at the stadium. Better yet, watching it on the field or in the dugout.

Well, this has been the job for Connor Koehnke, senior here at Ignatius. He is a bat boy for the Cleveland Indians at Progressive Field. He got the job the summer going into his sophomore year. The job’s paycheck is not bad, but it’s also one heck of an experience.

Connor describes his passion for baseball as something that started when he was a kid, but really intensified when he got the job. A favorite memory of his is when Eric Hosmer, the first baseman for the Kansas City Royals, once approached him before the start of an inning and informed him he was about to hit a homerun, which he did two pitches later.

To him, working with all of the MLB players is such an indescribable experience that is completely unique. It isn’t just Indians he meets either. Since he is the bat boy for the visiting teams at Progressive Field, he really gets to meet most players that pass through town.

His responsibilities include getting the dugouts ready, collecting baseballs during batting practice, cleaning shoes, getting foul balls, and of course, collecting bats. He cleans the dugout and even does the laundry for the players.

When asked if the environment changed at all at the stadium during the World Series, he said “the atmosphere around the ballpark has definitely intensified.”

As of right now Connor plans to keep working as a bat boy through college. So next time you see a game, see if you can pick out the Wildcat down by the dugouts.