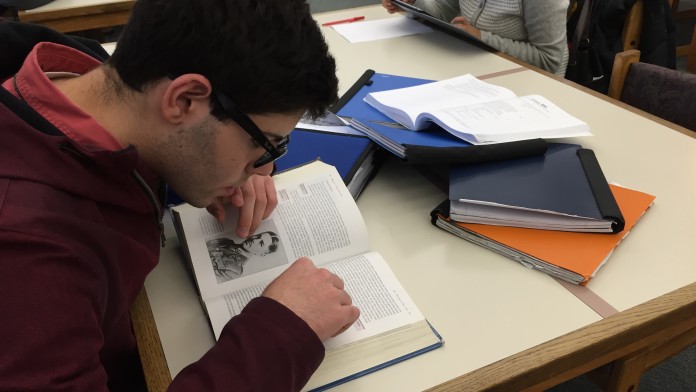 Saint Ignatius High School has always been a highly praised school not only for its competitive academics and its nationally recognized sports programs, but also for its numerous and very successful extracurriculars. These extracurriculars cater to all students’ needs and interests and range from things like the Pre-Med program to the Ploughmen to Catatonics. And it is frequently encouraged by the faculty and staff of Ignatius to join a few clubs and to get involved. However, do some students get too involved and overcommit themselves with too many clubs, sports, and rigorous courses?

Owen Miklos ‘16 finds himself involved in a lot of extracurriculars and athletic programs here at the school including The Eye, Yearbook, Saint Ignatius Broadcasting Network, JCWA/Model United Nations, Zenn Club, the golf team, and the tennis team. For the most part, Owen has been a member of these clubs since Freshman year. He is the head editor for the Student Life section of the school newspaper, does the color commentary for SIBN for both the Hockey Team and the occasional baseball game, and is both a varsity tennis and varsity golf player.

Concerning the time commitment for each of these clubs, Miklos said, “The Eye takes up Tuesdays and Wednesdays; broadcasting is a weekend thing (mostly); Yearbook takes up an hour every few weeks or so on Wednesdays; JCWA is a half hour most Tuesdays, more when we’re coming down the stretch before a conference; Zenn Club is a half hour on Mondays. When the weather’s nice outside, I like to go up to the driving range for an hour and a half when I get home from school. Tennis, during the months of April/May, takes up at least three or four days a week, where we’re either hitting at the courts at Magnificat or we’re doing Crossfit after school.”

Besides all of these extracurriculars, Miklos has historically taken a very challenging curriculum including the Streicher program as a freshman and honors and AP loaded schedules including AP English Literature and AP Economics.

Jacob Pilawa ‘16 is also another one of the students here at Ignatius finding himself involved in a lots of extracurriculars while also balancing a rigorous curriculum and a job. Around school Pilawa is involved in NHS where he is President of the Character campaign for the NHS leader committee, science olympiad, Democratic Ignatians on Politics, Robotics, Peer Tutoring (French, Math, and Physics), Academic Challenge, French Club, ESports Club, Pre-Med Society, St. Joseph of Arimathea Pallbearer Ministry, Homework Club, and the Arrupe Summer Program. He also used to be a member of the lacrosse team as well as the Swimming and Diving Team on which he lettered in diving.

When asked how much time he dedicates each week to these clubs Pilawa said, “I think the time dedicated to each club varies a lot. For something like Science Olympiad, where I have to put in a lot of extra effort, I probably dedicate an hour a day to studying from October to April, as well 8 hours on Saturdays and occasionally up the review when big competitions come up. I also put in a lot of time to DIOP and NHS, both about 3-5 hours per week each. The rest of my activities are about 1-2 hours per week.”

Pilawa also has taken some of the hardest courses at Ignatius, including the Kirby Science program, AP United States History, AP Art History, AP French, AP Chemistry, AP Physics, AP Language, AP BC Calculus, and AP Government along with many honors classes in his schedule. He also has a job a Tommy’s Jerky in Chesterland.

Pilawa commented on his intense and busy schedule by saying, “I just find it personally rewarding to finish an incredibly stressful week and know that I’ve gone through miserable amounts of work, only to be able to relax knowing it’s all behind me. It’s also showed me that you can really put your mind to anything and get it done.”