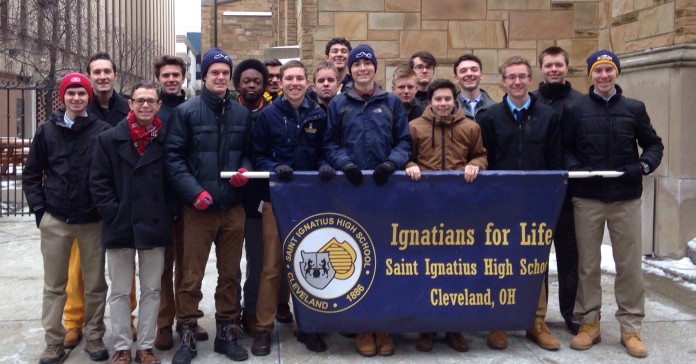 On Friday, January 22nd, St. Ignatius students along with students from Gilmour Academy, Notre Dame-Cathedral Latin, Beaumont, St. Eds, and Archbishop Hoban, gathered on our campus. They marched to St. John’s Cathedral so that they could make a “public witness” by raising awareness for victims of abortion and showing support to those affected by abortion.

Initially, St. Ignatius students involved in the Ignatians for Life group were scheduled to go on one of two trips to Washington D.C. One was a 24 hour overnight trip, the other was intended to last three days. These trips were cancelled due to extreme snow in the D.C. area, which proved to be a good call, due to the horrendous travel conditions resulting in mountains of snow that blocked roads and sidewalks. 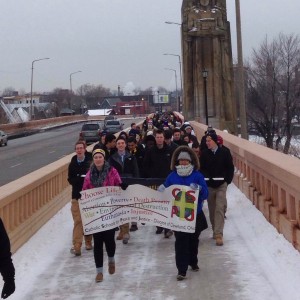 Although the weather was restricting them, these Ignatius men were not about to call it a day and go home. They connected with a group called Catholic Schools for Peace and Justice and, along with other schools, marched and attended a mass at St. John’s Cathedral. While marching with signs and banners, the 150 students partaking in the march received honks and thumbs-up of support by passing cars. In total there were about 1,000 people participating in the ceremony held by Bishop Lennon at St. John’s. Aside from schools that met at Ignatius, Benedictine, Cleveland Central Catholic, Elyria Catholic, Holy Name High School, Lake Catholic, Padua, St. Joseph Academy, St Vincent-St. Mary, Villa Angela-St. Joseph, and Walsh Jesuit also participated in the service.

Mr. Pacetti had this to say about the goal of the march: “This is part of our faith, we are standing up for a culture that believes in the right to life, we wanted to give a public witness to this matter.”

Senior Charles Heintel was more direct in what he thought the main goal was. He stated, “Obviously the ultimate goal is to end legal abortion in our country and to create a more pro-life society in general: we want people to respect life more and to realize that life is beautiful and sacred.” 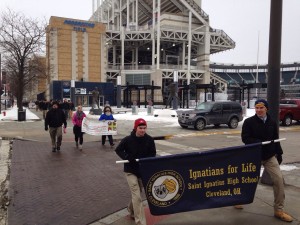 Even though initial plans were cancelled, the last minute switch to a local march and mass was deemed a success. “The Mass was a beautiful witness to our faith seeing all ages from all over Cleveland gathering as one to praise God and pray for the respect of life,” said Mitchell Pallaki ’16.

The march took what students learn in a theology classroom and allowed them to put it into practice. The purpose, meaning, and reason of the march was best summed up in a statement from Mitchell Pallaki, “As Ignatius men, we are called to set the world on fire, and give witness to our faith by going out into the world and being an example for all to follow. Do not give up the opportunity to live up to this ideal, as this trip provides a real opportunity to be a public witness to the importance and sanctity of life.”

We maybe snowed out of dc,but we are glad to be able to join with @SIHSCleveland @hoban and @NDCLLions to march to the Cathedral for mass.