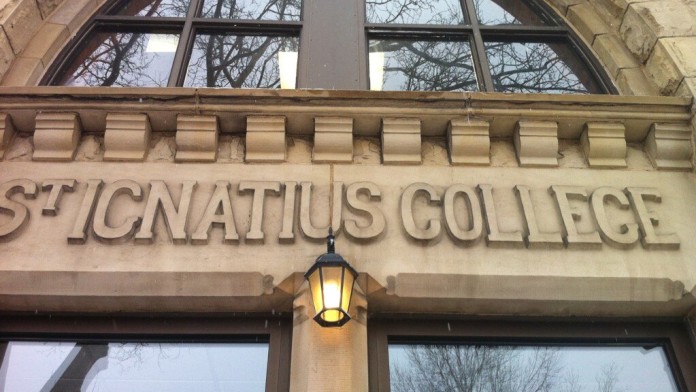 In the early hours of Thursday, January 21st, a bomb threat was called into the Cleveland Police department. Its target: Saint Ignatius High School. Classes were initially delayed, then finally cancelled by the administration in order to ensure student safety. The campus was searched by authorities, and classes are now back on for tomorrow, January 22nd.

There are a number of questions that remain: Who carried out this threat? Why did he/she do it? How safe are the students of Saint Ignatius? However, one question which may be overlooked is how Ignatius students feel about the entire event. Well, The Eye worked tirelessly on this day off to compile a list of reactions, opinions, responses, and feelings from specific students on this morning’s bomb threat.

“As a student at Saint Ignatius High School, I have never considered safety to be an issue. I felt that school was my second home, surrounded by people I could trust. My initial reaction to the news was ‘how could someone even threaten this ‘safe house’?’ Now that it is known that the tipper was not credible, I raise the question how could someone, whether it be a student, alumnus, or whomever, even think of a phony bomb threat and then proceed to act on that appalling thought? It disgusts me to think that it is funny to even threaten one’s safety. This could just be the nature of the society we currently live in. We believe we can truly joke around about race, sexuality, and now it has reached a point to where we can joke about a bomb. I loathe the fact that we even had to cancel school for a threat of a bomb, whether the threat was real or not. If we live in a world where schools need to be shut down at the threat of a bombing or shooting, there is something wrong. I am glad everyone is okay, but I am outraged that someone could even threaten 1400-plus students, faculty, and staff, all of whom are working to make the world a better place. The fact that someone would disrupt the good that Saint Ignatius High School does on a daily basis is truly disturbing.” – Jeffrey Lindholm ‘16

“Sometimes people joke around do stupid things, but it’s crazy how a person can threaten the lives of thousands of young men.” – Jett Elad ‘19

“I am almost positive it’s just a threat, but I’m glad the school took the necessary precautions anyway.” – Kenneth Chrulski ‘16

“My friends and I were not as scared as you might think, it’s just because of the world we’re growing up in; stuff like this happens. And thinking about that is just heartbreaking that some of us aren’t reacting much at all towards a threat on our school.” – Joshua Davis ‘19

“Well in my own opinion it brings up the idea of how often we talk about how open our campus is. Our campus is very open and for us to receive a bomb threat is 1 scary and 2 should open eyes of the administration office of how they can improve on campus security and building closure” – Julian Montanez ‘17

“I am almost positive it’s just a threat, but I’m glad the school took the necessary precautions anyway. They couldn’t guarantee the safety of the students, and I believe they made the right decision. I just hope something like this doesn’t become a regular occurrence.” – Kenneth Chrulski ‘16

“I was excited that we didn’t have school yet I was also concerned that we were not informed as to why school was closing for the day. Some email clarification by the faculty about the situation would have been nice rather than hearing the news from a tweet. As to the bomb threat itself. I hope it wasn’t valid, but regardless, I’m happy to know that the school handled the situation quickly and made sure to let us, the students, know not to come into school because of the potential danger.” – Didier Banyeretse ‘16

“It’s not scary but it’s more humbling. I think there’s a feeling that once we walk on campus nothing can touch us but I guess not.” – John Conway ‘18

“I woke up today at 6 as I normally do, and at this point the email that had been sent out was Franzinger’s ‘You don’t have school today, enjoy the day off’ thing. I was at first hype because I thought it was a snow day, but when I woke back up at 10 I looked on the news and it got super real. The original email said “campus will open at 7” and I thought it was kind of shady that they were about to have us all come to school right after a bomb squad had left and not tell us anything. It became apparent really quickly that we all could have been in danger. I think it was definitely right of them to close school today while they find out what’s going on.” – Aidan McKeon ‘18

“Wanting a day off from school or attention is no excuse for putting everyone’s lives at risk.” – Caleb ‘18

“As any other student would be, hearing the news of no school today would have made their day. I felt the same way when I realized I’d be getting an extra two hours of sleep and was going to get an extra day to study for my theology test. After I heard the reason we had school off was because of a bomb threat, my emotions totally flipped. I was worried about the bomb threat and why someone would want to do something like that to our school. I’m very disappointed and sad to see something like this happen. I know other students will enjoy their day off regardless the reason, but the horrible news of a bomb threat will make it hard to enjoy myself.” – Jeffrey Outcalt ‘18

“I never thought this could happen to Ignatius. We hear about threats like these all the time, but don’t think that it could happen to us. Now that it has, we’re just thankful that it was just a threat.” – Peter Harb ‘17

“I couldn’t help but to hope that the person threatening the school receives the help that he or she obviously needs.” – Joe Clark ‘17

“After first receiving word of having the day off, my dad and I were bewildered because of the lack of freezing temperatures or snow. It wasn’t until about an hour later when my friend, Riley, sent me a picture of a news report stating that Saint Ignatius High School received a bomb threat. Honestly, I was disheartened by the potential of Ignatius being blown down by someone in need of help. I couldn’t help but to hope that the person threatening the school receives the help that he or she obviously needs. After all of that, I’d have much rather had a snow day be the reason that we were off from school.” – Joe Clark ‘17

“It’s a heavy, heavy feeling. I know that no school is immune to threats or acts of violence, but to think it could happen to your own, a place where I think we all feel extremely safe, really puts things into perspective.” – Jacob Pilawa ‘16

“On a serious note, all I want to know is how are they going to affirm our safety for Friday morning as well. Who is to say that the bombing couldn’t happen tomorrow?” – James Norris ’16

In an email sent later in the day, Mr. Bradesca informed the community that police and staff will search the campus one more time Friday morning before students and faculty arrive.

“Honestly I would not feel at all safe going to school tomorrow either. Who knows what could happen.” – Edward Thompson ‘17

“I’m real salty at however did this because this just took away one of my last days here to have fun with friends. And I hardly ever speak my mind out in classes or tell people what I truly think so this is quite important to me.” – Eric Reinhart ‘16

“I think it was definitely something that the whole student body wasn’t expecting. Why anyone would want to threaten or possibly go through with a plan involving a bomb, is beyond me. At the end of the day, I’m just glad everyone was safe.” – Aiden Wells ‘19

“Honestly, I think this threat is stupid. You don’t go to Ignatius and not want to learn or be there. I love coming every day not because of the work though, but because of the memories I can make with friends. I’m real salty at however did this because this just took away one of my last days here to have fun with friends. And I hardly ever speak my mind out in classes or tell people what I truly think so this is quite important to me. This is pathetic and I hope they can kick off campus whoever did that. ” – Eric Reinhart ‘16

Thank you to everyone who shared his opinion with us, we appreciated every response but we could not include each and every one in this article. If you share one or more of these opinions, or would like to express your own, please comment below.