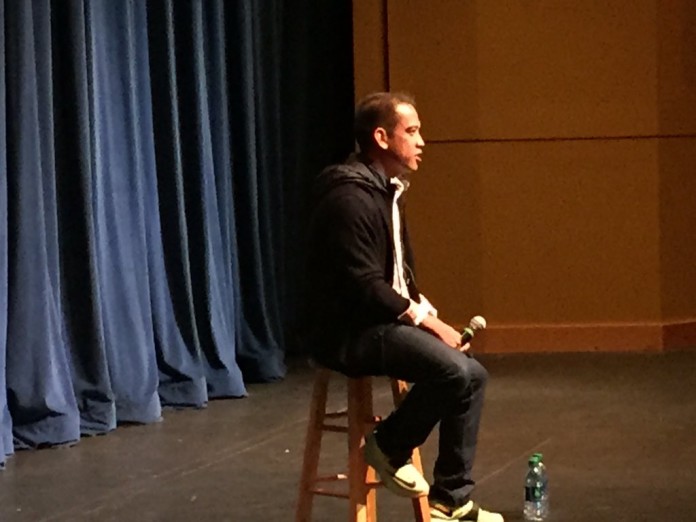 On Friday November 13, the majority of the senior class gathered in the Breen Center to listen to successful alumni Jeff Dejelo ‘95, Vice President of Sales at Twitter.

Mr. Marc Milkie, the Advancement Department’s Major Gifts Officer, coordinated the talk with Jeff and was the main reason that the seniors had such a great opportunity. When asked why he chose Jeff to present to the class, Mr. Milkie said, “When I met Jeff, I was with Father Murphy. Jeff had an interesting way of looking at things and an interesting ending. I thought this would be valuable for the senior class with college decisions just around the corner.”

Jeff, the valedictorian of his class, spoke with the seniors mainly about the importance of a Jesuit education. Jeff had received admission into many prestigious universities like Yale, Stanford, and Notre Dame, but Jeff wanted to bring the tradition of a Jesuit education that he got from Saint Ignatius into his college choice. This lead him to choose to attend Fordham University.

Jeff often used the phrase ‘community’ when describing Fordham. He ultimately chose Fordham over some top-tier schools because he loved the sense of community there. Jeff said that he got a sense of community from Saint Ignatius, which was the main thing that he looked for in colleges. He also looks for community and passion in his team at Twitter. Jeff believes that this communal feeling is crucial to the success of his team members.

Mr. Milkie said that Jeff’s talk conveyed two major ideas: “Don’t expect life to go as planned, and don’t fret.” Jeff’s life went down a completely different path than he had imagined. Although he is the Vice President for Sales, he actually majored in Philosophy and Theology at Fordham. The path that he expected his majors would lead him down completely shifted after beginning his career on Wall Street in the early 2000s. He later moved on to working with finances at Yahoo, Google, and now Twitter. It’s quite obvious that life didn’t go as expected for Jeff.

This senior talk was very beneficial for the class of 2016, as students were engaged with questions and learning about what to look for in colleges. “It was nice of him to come and talk with us and I feel that I learned a lot about how to make my college decisions,” said Mitch Brezina ‘16. Although only three seniors signed up a week before the talk, roughly 90% of the senior class ended up attending the presentation. Mr. Milkie was very pleased with the outcome: “I thought the questions from the seniors and their attentiveness was great.”