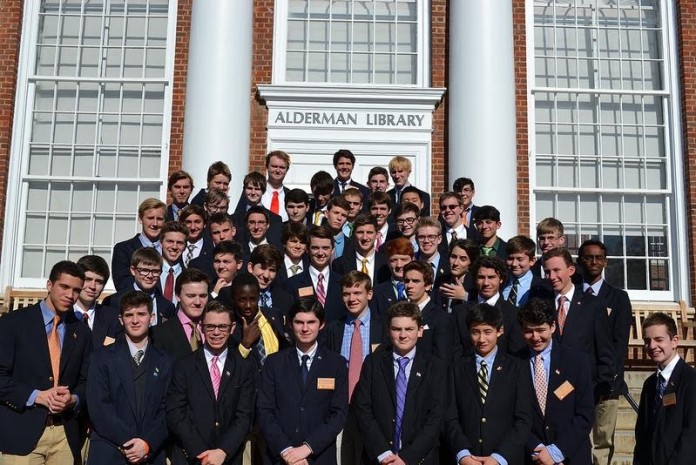 Fifty delegates from all grades went to the 35th University of Virginia Model United Nations conference on November 13-15. The delegates performed their best yet in their third showing at the conference, earning a 4th place finish among 48 top high schools.

In Model UN, delegates represent a country or influential person and debate important topics, both global and regional. There were conferences of the World Health Organization, the French Parliament in the wake of the Algerian War in 1954, the Irish War of Independence in 1919, and many more.

Five delegates from Ignatius won awards in the program. David Scheatzle ‘17 received a verbal commendation for his work. Michael Benevento ‘16, Sam Watters ‘18, and Cullen Viancourt ‘18 all received awards for outstanding (2nd place) delegates in their committees. Owen Hearns ‘17 swept the gold medal, winning a gavel for Best Delegate in the Second Continental Congress.

According to Secretary-General of the club David Pietrow ‘17, lots of preparation was put into these awards. “We had the guys work hard, plain and simple. We put them through rigorous checks about what kind of research they did, how prepared they are for the conference, and, most importantly, how aware they are about the topic.”

In order to perform well at the conference, delegates spent many hours in preparations and research. This year, the club has more strict deadlines and requirements for delegates to board the bus. These obviously paid off, given the great performances of our delegates.

According to Best Delegate Owen Hearns ‘17, hard work paid off. “Like all St. Ignatius delegates, I compounded a huge supply of research before the conference. Then, I took all of the essential information from my sources and transformed it into a paper.” These preparations, along with his natural knowledge and debate talent, enabled him to trump delegates from the best high schools in the area, like Langley High School.

Awards aside, there are other important reasons that delegates choose to participate in Model UN. As Owen says, “The idea of a social aspect within debate really intrigues me. You need to make friendships and work with other delegates to achieve an ultimate goal. Also, the fact that there are real world implications to a Model United Nations conference is an important aspect of the simulation.”

The Diplocats will continue their domination at Earlham College MUN in late January, and more conferences are to follow.