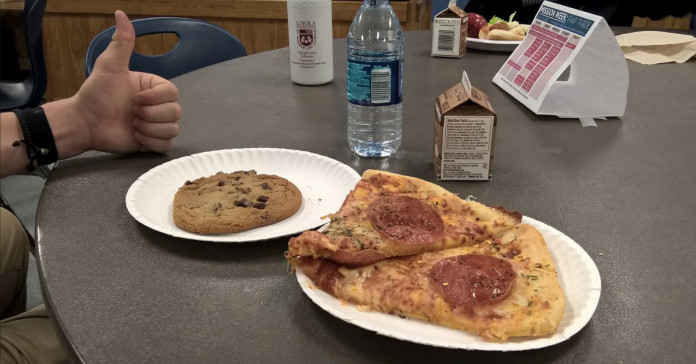 If there were a pantheon of high school cafeterias, the Rade Dining Hall would have ascended into that esteemed group long ago. It is unlikely that many other schools nationwide have such a diverse assemblage of food items; the buffets of inedible slop gracing the trays of thousands of students nationwide are nowhere to be found at Saint Ignatius, where hot meals, iced coffees, and fresh pastries are par for the course.

The addition of a salad bar in 2013 fulfilled the demand for a healthy option in a cafeteria where the proportion of healthy foods to junk was — and still remains — hopelessly lopsided in favor of the latter.

On an average morning, your average Ignatian has his choice of donuts, breakfast sandwiches, and toaster pancakes to satisfy a morning hunger pang. Come third period he has the new options of soft pretzels and gooey cookies to add to his pallette, and the day’s first pizzas — all three types — have been set out for early consumption. When our friend reaches the counter, he’s hit with sensory overload as he tries to process all of the chocolate bars, chips, pastries, and candy that sit, over flowing, from the aluminum buckets that they’ve been corralled into. Unable to help himself, Joe Fabeetz ‘18 grabs a Reese’s and a bag of Mesquite BBQ Dirty Chips before checking out and heading to his next class.

It doesn’t take a genius to figure out the disconnect here, but the question is: Is it all just a product of today’s day and age, or is there an intelligence beneath it all, driving the health initiative on a slightly more circuitous route, but on a road to wellness nonetheless?
More of the latter, so it seems:

“We’re trying to do an even balance because we are trying to give you boys a choice,” said Mrs. Marianna Burgess of Campus Dining. “We want to create an environment where no one is telling you what to eat, and where you can come up and get some great food.”

While the salad bar continues to make waves across campus, it would seem that many students are looking for options elsewhere. Seniors nostalgic for the days of fruit nuggets and Brookside chocolate-covered berries point to those and other items from Rade’s past that have dropped off the racks. Overall, though, sentiment for the present condition of the cafeteria is high.

When asked about his opinion of the recent cafeteria changes, Mike Vallee ‘16 gave his seal of approval: “Sushi is bomb.”