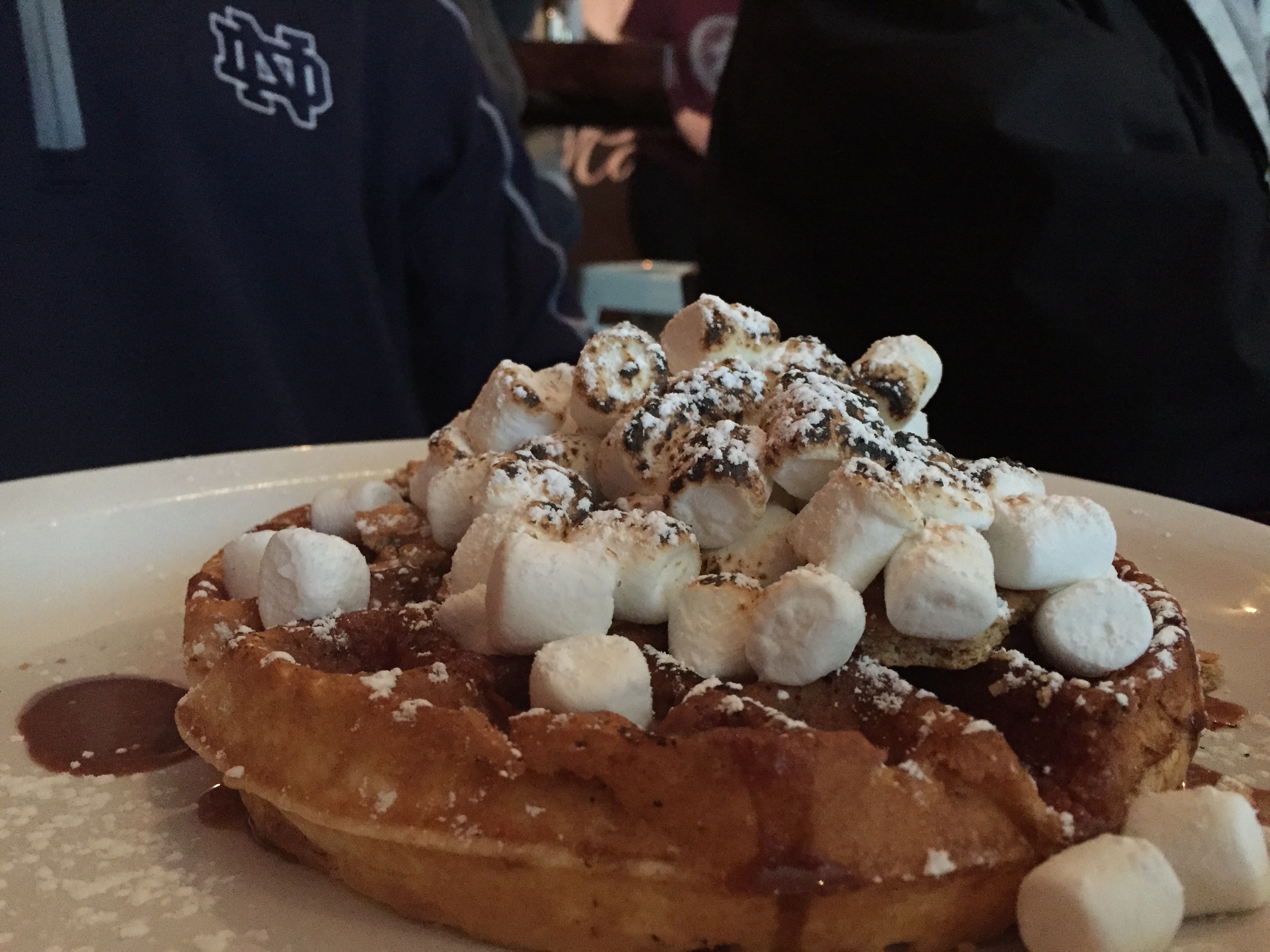 Jack Flaps Urban Breakfast Shoppe is one of many restaurants in Ohio City which prides itself on its uniqueness.

The restaurant, known for its richly decorated and flavored waffles and pancakes, is casually decorated with modern photographs of models whose faces have been covered by Jack Flaps’ food.

Despite the trendy decorations, the atmosphere of Jack Flaps is slightly hurried. The breakfast spot isn’t known for its extensive size. One will undoubtedly notice the claustrophobic nightmare of a line at the restaurant’s entrance briefly downsize as parties with more than two people exit after discovering that they will be waiting a minimum of thirty minutes for a table. Yet, the line will inevitably fill up again as the shop seems to be a hot spot for couples and small families.

Nearly everything on the menu is a classic breakfast dish, but each comes with a twist. One of Jack Flaps’ most popular dishes is the “Graham Cracker,” a waffle topped with Graham crackers, Nutella, and bruleed marshmallows. The dish tastes exactly as it sounds – sweet and rich, similar to a gingerbread house. The waffle is good for a few bites, but ultimately looks better than it tastes. Other popular waffle or pancake options include “The Bacon Brownie,” “The Fat Elvis,” and for those who are a little less adventurous, “The Original Buttermilk.”

Another popular dish is the “PB&J,” but don’t be fooled; this is no brown bag lunch sandwich. It’s a french toast dish, smothered with Chocolate Nutella, peanut butter, berry jam, and cereal milk whipped cream. The meal, rich with a sweet but not overly aggressive flavor, tastes better than the “Graham Cracker” waffle and is undeniably easier to finish.

When eating at Jack Flaps, one can select from a variety of side dishes, but like the entrees, each comes with a twist. The bacon is listed on the menu as “Mexican coke-glazed pork belly,” and has a unique smoky flavor.

Ultimately, Jack Flaps seems to be hit or miss, as some its meal options are just as much of a risk as going to the restaurant with a group. Most of the food is pretty good, but not always as good as it looks or worth the risk. One might like his meal, one probably won’t. One might get a table, six probably won’t.