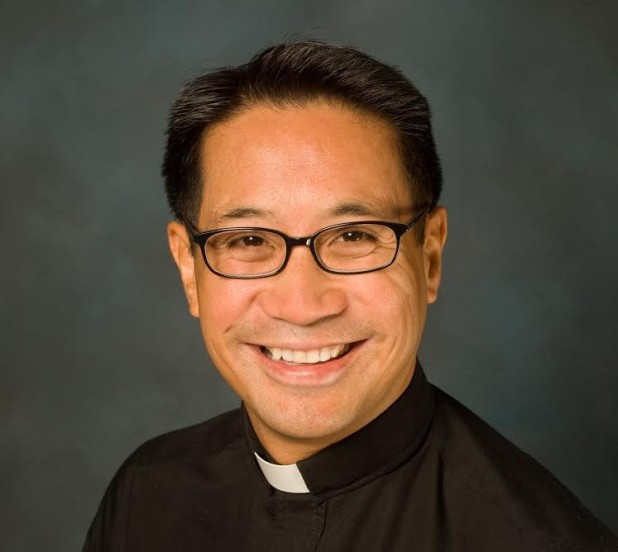 In June, Saint Ignatius High School will have its 26th president in school history. To some, the new president will be a familiar face, but for most of us, Fr. Raymond Guiao ‘82, S.J. will be a new face to the Saint Ignatius student body, not to mention the faculty and staff.

Currently, Fr. Ray Guiao ‘82, S.J. serves as the Assistant to the Provincial for Formation for both the Detroit-Chicago and Wisconsin Provinces of the Society of Jesus, where he oversees the academic and professional training of Jesuits training to be brothers and priests. He joined the Society of Jesus in 1986, and was ordained into the priesthood in 1999. Fr. Ray officially pronounced his final vows in the Society of Jesus in 2009. The first mass he celebrated was in 1999, right down the road in Fairview Park, Ohio at Saint Angela Merici Parish and School.

Before he joined The Jesuits, Fr. Ray grew up right here in Cleveland, Ohio, where he attended Wildcat High, and graduated in 1982. He went on to attend Case Western Reserve University in University Heights, Ohio, where he earned his Bachelor of Arts degree in English in 1986. Later in 1988 he earned his Bachelor of Arts degree in Music from Mundelein College in Chicago, Illinois. He then earned his Master of Music in Voice Performance from the University of Michigan School of Music in 1992. In 1998, he traveled to Cambridge, Massachusetts to earn his Master of Divinity at Weston Jesuit School of Theology. Finally in 2000, he earned his Master of Arts in Liturgical Theology at The Catholic Theological Union in Chicago, Illinois.

Fr. Ray’s educational journey is rooted in his time as a student at Saint Ignatius; however, he has taken every opportunity to be involved with the school since those four years. He came to Saint Ignatius from 1992 to 1995 when he was a Jesuit regent, and then came back as an ordained Jesuit priest from 2000-2007. In both his tenures, he was a theology, English, and music teacher.

One of his biggest contributions here at Saint Ignatius was growing the Choral and Liturgical Music programs. Almost everyone is familiar with the church hymn that we use at school liturgies, “Sing We Now to You O Mary.” Fr. Ray is the writer of this renowned piece.

Also while he was at Saint Ignatius, Fr. Ray served two years as Vice President for Ignatian Mission from 2004-2006.

In addition, Fr. Ray attributes his strong faith life to his time as a student. He was inspired by the Jesuit educators that taught him in the late 1970’s and early 1980’s. Fr. Lawrence Ober, the current AP Art History teacher, and Fr. Robert Welsh, a beloved member of the Jesuit community were two of these educators. Fr. Ray describes them as, “men who give their whole lives to the Lord.”

However, Fr. Ray didn’t originally plan on becoming a priest. He went into college with the mindset of becoming a doctor; however, God had other plans for him. “I was called to be a ‘doctor of souls,’ and I couldn’t be happier,” proclaims Fr. Ray.

Fr. Ray’s next role in life is to be the president of Saint Ignatius High School. When accepting the role, Fr. Ray lived his vow of obedience, a central element of the Society of Jesus.

“I knew that the position was open this past fall, but it wasn’t until my provincial superior, Fr. Brian Paulson, S.J., approached me and asked me if I had any interest in applying for the presidency,” Fr. Ray explains. “I welcomed the chance to apply for the president position.”

Yes, he will be the next president here at Saint Ignatius, but he just needs the ‘sign from his base coach’ to serve at the helm. In other words, the provincial superior has to mission Fr. Ray to Saint Ignatius.

“We Jesuits are not entirely free to pick and choose. We answer to needs. I am thrilled and grateful that the need arose at Saint Ignatius, and that my provincial superior asked me to apply for it.”

It will be a sweet homecoming for Fr. Ray Guiao come June, as he will be serving as president to the place where he got his start, and where he truly thought about becoming a priest.

“I deeply love Saint Ignatius High School: its mission of forming ‘Men for Others,’ its excellent students, its superb and devoted faculty, staff, and administration, its faithful alumni and generous benefactors.”

Fr. Ray Guiao ‘82, S.J. is a perfect fit here at Saint Ignatius High School, and is truly blessed and grateful to be accepted in the community.

“I am honored and humbled by this.”