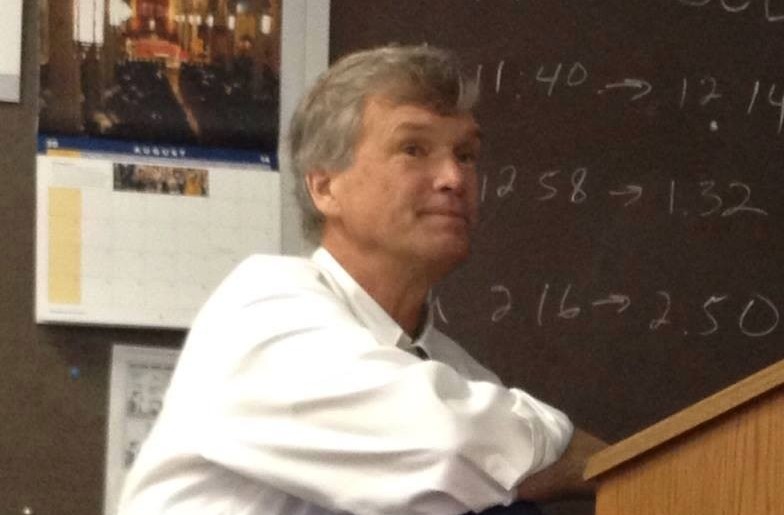 “Love one another…Go learn something.” These two maxims are the foundation of Jesuit education, and their speaker, Jim Skerl ’74, chose to make them his last words to the Saint Ignatius community on October 3, 2014, his final day as a teacher. A committed disciple of Christ, Skerl, who passed away at the age of 58 on Thursday, October 23, 2014 after a 20-month battle with pancreatic cancer, will not quickly fade from the hearts of those blessed to have called him a neighbor, relative, colleague, teacher, and friend. The indelible mark imprinted by Jim Skerl on the character of service and love at Saint Ignatius has left many who have encountered him to come to grips with the impact he has had on them and the school.

After four years away from Ignatius spent at John Carroll University, Skerl returned to his alma mater in 1978 to teach theology for the first of thirty-six years. It wasn’t long before the novice became a veteran who commanded respect. Indeed his charisma was such that three current theology teachers Dan Galla, Dan Baron, and Marty Dybicz immediately recognized his Christlike approach to life.

“I was teaching freshmen and some guys had really gotten out of line. They did something seriously bad in class and I had four or five of them that I held in the hall for a lecture,” said Deacon Galla. “I’m really giving it to them, and this is like two to three weeks into school at the most. After I let them go, Jim took me gently by the elbow and said, ‘we don’t do it that way here.’ I never forgot those words.”

Baron’s connection goes even further back. “I first met Jim in high school. He was a year younger than me. I went to [Cathedral] Latin, so we were rival schools, but a lot of my friends knew him. At Latin, we hated the kids from Ignatius. But not so much Jim Skerl–he was just a good guy,” Baron said.
[pullquote]

We decided that those are the things we’ll say yes to – the things that call our kids to ‘feed the hungry,’ ‘visit the sick’ and ‘clothe the naked,’”

But perhaps the story that best illustrates Skerl’s innate appeal comes from Marty Dybicz. “I was visiting my fiancée’s family in Cleveland when we stopped at what’s now the BP gas station in University Heights. Back then, gas stations used to have employees who would fill your gas tank for you and clean off your windshield. The first time I ever saw Jim Skerl, he was cleaning the car window with a big grin on his face. My first reaction was ‘what does that guy have to be so happy about?’ That was my first thought of Jim Skerl. I can still picture it,” said Dybicz.

Once at Ignatius, Skerl wasted no time taking the initiative to ensure the “Men for Others” motto, which had recently been adopted then, would be put into practice. For a while, Ignatius’ main extracurricular program was called the Student Community Involvement Program (SCIP). While the program was ostensibly devoted to helping students grow in their faith through community outreach, students in SCIP were often tasked with service jobs that didn’t challenge them spiritually. Dan Baron recalls a time when the school received a request from a foundation looking for student valets for an upcoming charity benefit. “The cause was good, but it was far removed from direct service. Mr. Skerl was all about the works of mercy. We decided that those are the things we’ll say yes to – the things that call our kids to ‘feed the hungry,’ ‘visit the sick’ and ‘clothe the naked,’” Baron recounted.

This commitment was realized when Skerl created the Christian Action Team (CAT), an umbrella organization that covered all extracurricular student service opportunities. “CAT evolved out of the desire to bring all these different service activities under one umbrella. Those were Mr. Skerl’s efforts. He was the driving force. We had all these really good things happening but they were happening independently of each other. He brought them together under the umbrella that we call CAT,” Baron recalled. “He was instrumental in making sure that all of our service efforts were prayerful and Christ-centered.”

To the preexisting service opportunities, Skerl added Labre Homeless Ministry, the Arimathea Pallbearer Ministry, and the L’Arche chapter. And that goes without mentioning the litany of service organizations the development of which Skerl spurred on and guided.

This commitment to the works of mercy resonated with the student body. As a testament to this, Baron recalls at the first Potter’s Field Pallbearers Mass, where there were a total of eleven people, including himself and Skerl. “Now we get close to two hundred people. And that’s because of Skerl,” Baron said.

Danny Ertle ’15 is the first to say that his participation in service was heavily influenced by Skerl. “Mr. Skerl literally took his faith in Christ to the streets. His commitment to service was simply contagious and will forever change my life. He was a living example of what Christian men are called to be,” Ertle said.

Skerl’s contributions to service at Ignatius are even now challenging teachers to get more involved themselves. “I tried keeping up with him during this school year, but I couldn’t keep pace with all that he does. And he was sick! We kept saying, ‘Who’s going to replace him with Pallbearers, with CAT?’ and it’s going to be six people. I’m not kidding! Because he did that much,” Baron said. “He missed two days of school since he’s been sick. One of them was the day he had surgery, and he came in that evening for ‘Meet the Parents.’”

Committed to living out Christ’s example, Skerl couldn’t help but put others first even in his last hour. “He was home, and we were down to the last days. He’s lying on a hospital bed and decided to pray for all of the people who had used his bed before. Who thinks about that? Who thinks about praying for others who have gone before them, who have used this bed before them?” Baron said.
[pullquote]

Jim Skerl’s legacy will be one that many will struggle to replicate for years to come. The epitome of a man for others, he has been an example to all by ensuring that regardless of background, Ignatians can find common cause in the works of mercy. That shared focus, according to Dybicz, is Skerl’s greatest impact. “I don’t want to downplay all the efforts to be men for others before Mr. Skerl, but Mr. Skerl clearly took the school’s efforts to be men for others a quantum leap above what it had been. He did it the very best way – by basing it not on politics, but on the works of mercy. Kids who identify themselves as liberals, and kids who identify them as libertarians, and kids who identify themselves as conservatives, have all been involved in CAT. The emphasis on CAT was looking at other people as persons, and not as part of some political agenda. And that was a part of the genius of Mr. Skerl. He kept service unpoliticized. He kept it Christian, he kept it Catholic. And that’s part of his legacy that I hope lives forever,” Dybicz said. Here’s hoping.

Thanks Mr. Skerl. Rest in peace.