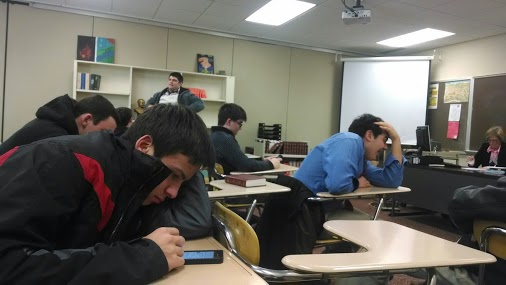 At orientation in the beginning of the 2013-2014 school year, Principal Bradesca announced an exciting new policy for in-class use of cellphones. Much to the joy of students, this new, more liberal policy allowed for students to use their phones not only in certain common areas such as Rade Dining Hall and the library, but also in their classes upon permission from teachers. The shift to this new policy was due to administration’s belief that cell phones, specifically smart phones, could be an important educational tool.

At the midpoint of the academic year, following a semester in which they got a first-hand look at the way the new policy affected classroom learning, Mr. Gavin, Mr. Ptak, Mr. Sabol, and Mr. Strauss agreed to sit down and give their input on the policy thus far. The general consensus was that, while cell-phones can be useful, versatile tools, they generally serve as tools of convenience, merely holding place for more powerful devices.

Among the most-noted advantages of cell-phone use were the easily-accessible versatility and convenience that the devices offer. According to Mr. Strauss, as the English department has started to modernize, online books have been a good alternative to hardbacks. Because of this modernization, students are often able to follow along the text using their phones in class.

Down a few flights of stairs, Mr. Sabol has been able to use those same phones to take in-class polls, using a program called “Poll Everywhere.” According to Mr. Sabol, “Poll Everywhere is a nice program because it offers anybody with a cellphone the opportunity to participate, not necessarily just those with smartphones.”

As for Mr. Ptak, his experience with cell-phones is that students can now easily use their phones to verify his claims, and when necessary, correct those claims, which will then start a conversation. However, Mr. Ptak doesn’t limit this use to just cellphones. “I don’t use them as cellphones, per say, but rather just a device they can get on the internet with,” Ptak said. He also added that he prefers other devices for the speed and practicality. “There’s almost always a couple of kids in a class that have iPads or laptops, and I’d probably turn to them first because phones just seem slower and harder to read.”

While they saw some opportunity for use, the teachers also noted that allowing students to use their phones requires a certain level of trust on their part, as a student across the room could just as easily be trying his luck in yet another brutally frustrating game of Flappy Bird. According to Mr. Gavin, such improper use will not be tolerated, and simply is a distraction to the class.

Students, on the other hand, have enjoyed the freedom to use their phones throughout campus and occasionally in class. James Zajaczkowski ‘15 has taken advantage of this new program, saying, “I frequently use my phone to check email and my grades, as well as to quickly look something up. I also have used my phone to take pictures of textbook pages so I can spare hauling the book home.” James also added to that list “of course texting girls as well so they don’t think I’m ignoring them. It’s for both my studious and social sides.”