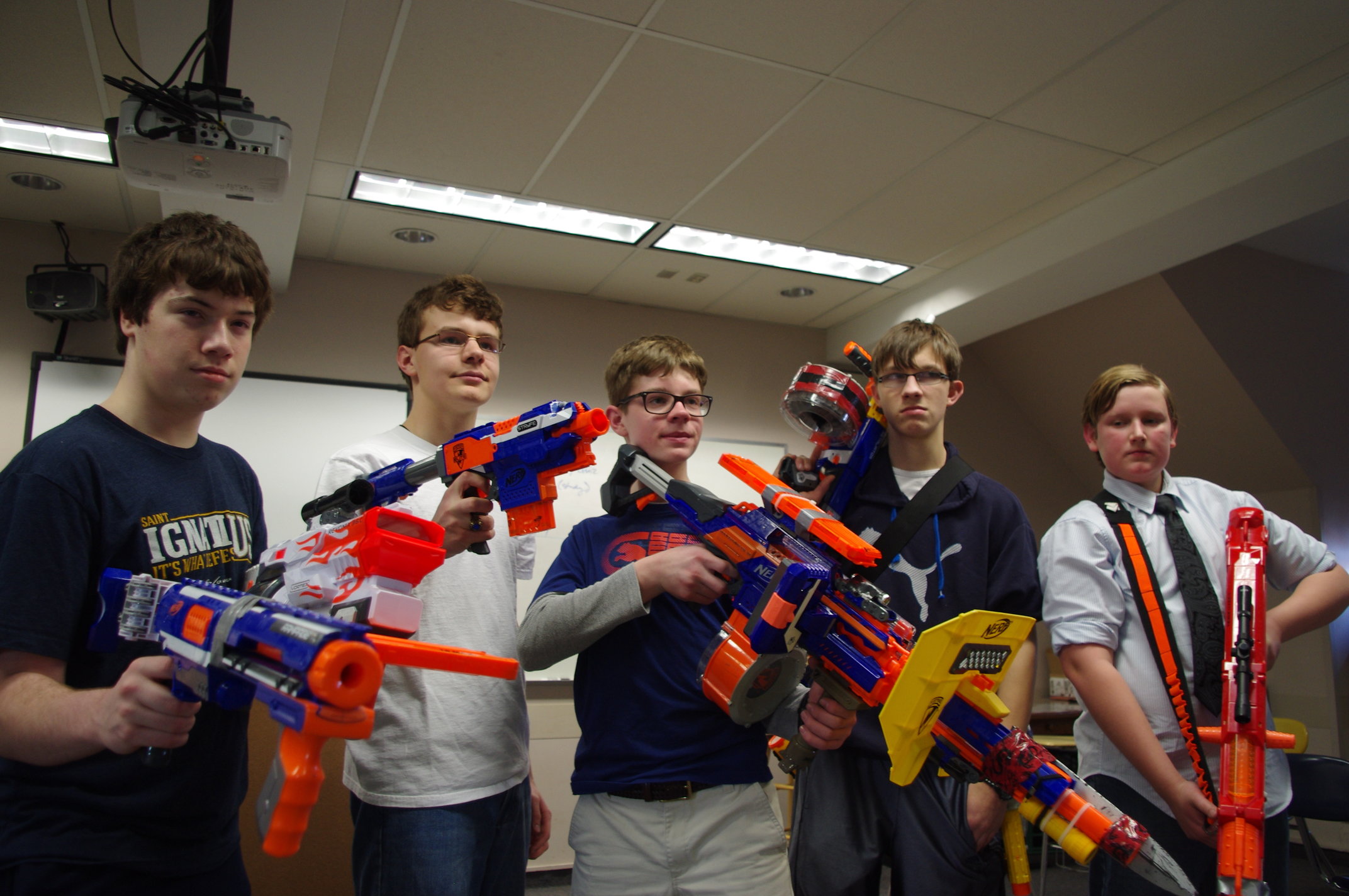 Just last year, Principal Bradesca shot down a student proposal for a shooting club on the grounds that student safety might be imperiled. Any future connection between the Saint Ignatius student body and firearms, at least on campus, seemed doubtful. But with the advent of the NERF Club, a freshman-driven organization that aims to host massive on-campus NERF shootouts, along with Humans versus Zombies dart gun-based competitions, guns – albeit harmless guns – may be returning in style.

According to club vice-president Joey Ripcho, he and his friend Vinny Camma decided to begin the club after overhearing a proposal by sophomore A.J. Hocevar, now the club’s chief officer. The idea gathered steam quickly, and the freshman soon found eager members, including Fergus Pearson, Justin Boes, and Sean Smith.

As the ideas for the club quickly evolved and became more definite, the freshmen entrepreneurs realized that they needed to find teacher moderators. The club is now aided by the faculty triumvirate of Ms. Sebring, Mr. Cottos and Mr. Masterson, who provide friendly guidance to a group of student organizers that has proved especially dedicated to ensuring that every aspect of their events is planned in depth – even though the club is still in the final stages of acquiring approval from Mr. Bradesca.

“We’ve finished all the paperwork, such as the rules, and the waiver, but none of the club’s founding members have common free periods or days off after school, so we can’t organize ourselves enough right now to get it approved,” Fergus Pearson said. “However, through the use of social media, we hope to finish the process and get the club under way.”

The Nerf Club leadership plans on hosting large-scale competitions, including Capture the Flag, Humans versus Zombies – popularly known as HvZ, an event that routinely gathers hundreds of participants in suburbs in the Cleveland area – and all on campus, likely during Saturday afternoons when campus will be free of passerby who could become civilian casualties. They are hoping for an enthusiastic response from the student body, which they believe contains many students like themselves: people who are as interested in the mechanics and culture of NERF guns as the actual gunfights in which they are used.

NERF culture revolves around discussing, evaluating, bartering, and, most importantly, modifying the Hasbro Corp. blasters that are sold in department stores nationwide. Modifications can range from shortening or lengthening barrels to adding sights, taping magazines, increasing or decreasing the distance the darts travel or changing the shape and functionality of the darts themselves. The NERF Club has a thriving modification trade, and freshman Fergus Pearson has emerged as a prominent NERF gun profiteer. He and his fellow enthusiasts are active in online communities on YouTube and NERF forums, where they learn the tools of the trade that have helped them become proficient in manipulating the complicated air-compression systems that are the power behind NERF guns. They are obsessed with improvement, and they hope other students will be too.

Once the NERF Club finally receives the administration’s go-ahead, organizational meetings open to the public will promptly follow. With the school stamp of approval, NERF Club looks to become the epicenter of the school’s lively, and surprisingly peaceful, gun culture. Rubber-tipped darts may be making their way to an Ignatius hallway near you.