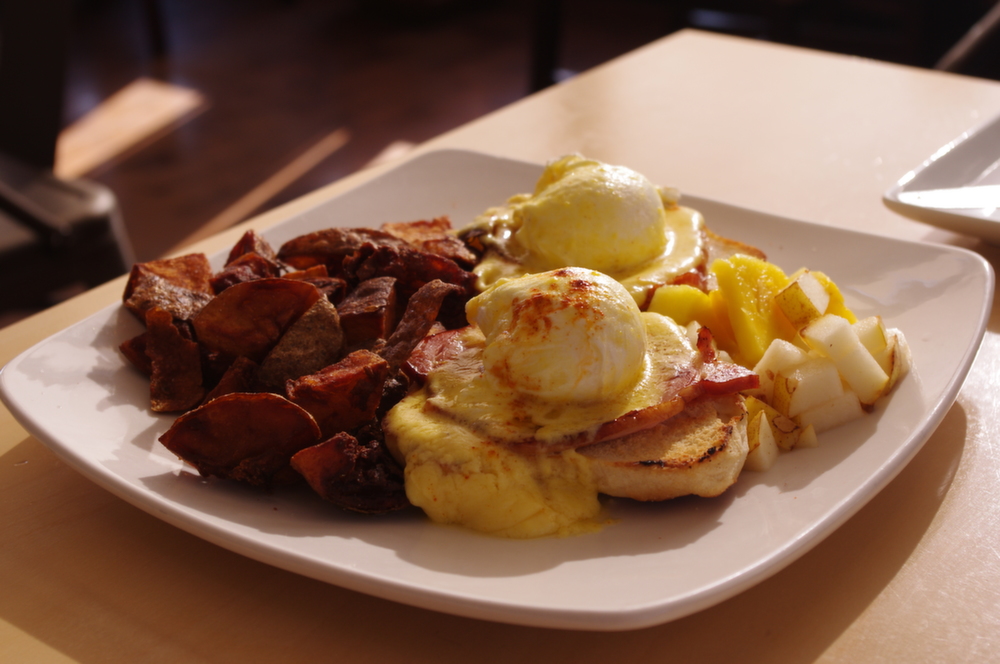 Four out of Five Paws
$$ (less than ten dollars)

When I walked into Bon Bon Cafe, I was immediately struck by the atmosphere, an intense concentration of the hip, trendy Ohio City neighborhood feel.

Bon Bon is is the polar opposite of the traditional mom and pop restaurant. Everything about the restaurant cultivates the intended atmosphere: the eclectic soundtrack that varies from Thriller to ‘50s rock, and even sports a rare appearance by the quality track “Why Don’t We Do It in the Road” from the White Album by the Beatles.

Drinks are served in mason jars, and the patrons match the unconventional decor – while I was eating my meal, a dead ringer for Spock dropped by to grab a pastry. The effect of the ambience is to welcome the diner into a unique universe, one that is simultaneously urban and affable.

The Morning Tacos came with a side of nachos and fruity salsa. The tacos themselves were overflowing with bacon, fontina, black beans, cilantro, and scrambled eggs. Runny eggs prevented the tacos from becoming overly dry. As I am used to the traditional tomato blend, the blended-fruit salsa was a pleasant twist on a familiar theme.

The Eggs Benedict were served on the the traditional English muffin, alongside Canadian bacon that came with a side of crispy, diced potatoes. Although the potatoes themselves were bland – generally the case everywhere – a serving of the house’s hot sauce gave them much needed flavor. But for those afraid of spice, fear not, because the initial zingy kick quickly dissipates into a lighter smoky taste.

The Vanilla Bean French Toast, though, topped the cake. Served with Sweetened Mascarpone, a creamy cheese, Banana Compote, slices of banana immersed in sugar syrup, the French Toast were more dessert than breakfast, backed up by toasted walnuts that gave the dish savory undertones. The French toast itself inflated in size because of the ample eggy coating, and each bite of it offered a delectable combination.

The meals are each as distinct as the restaurant and the Ohio CIty neighborhood itself. Not only are the meals unique but the price is beyond reasonable at $5 for all breakfast entrees from Tuesday to Saturday during the afternoon 2 to 8 p.m. window. Though the winter season hours for the kitchen go only til 3:00 p.m.

Although this deal only covers breakfast meals, I find them to be as filling and satisfying as the lunch entrees, and I certainly recommend that you take advantage of the offer. If you find you really love the Bon Bon style, go for one of the lunches – somewhat pricier, averaging around ten dollars.

Bon Bon is a great place to go after school and relax to eat on the cheap, as I learned when visited with three friends. If tacos, pastries and retro vibes are your thing, give it a shot. Carpe diem, and Carpe Bon Bon.