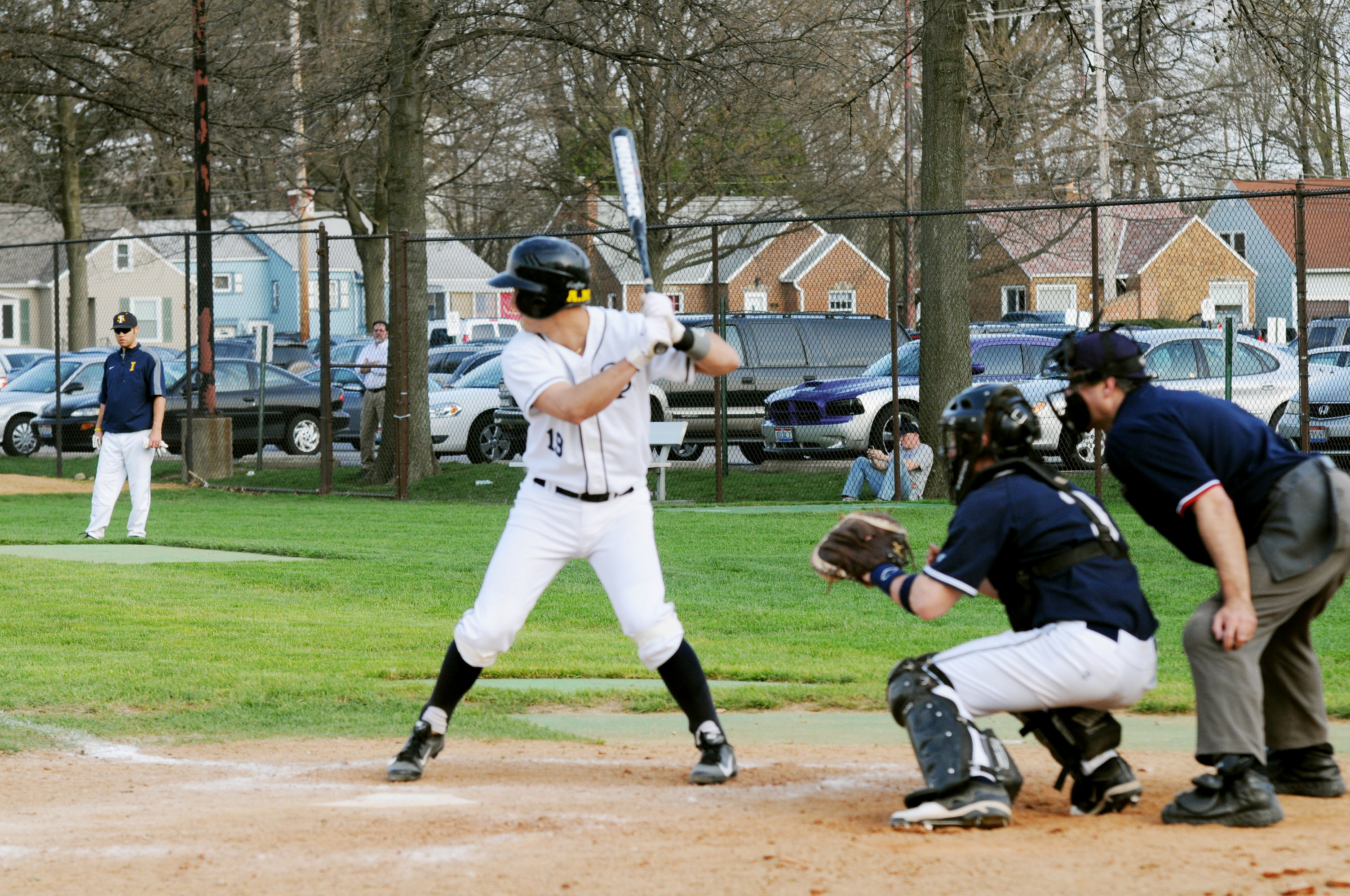 The same team that started 0-2 and 5-5 will be playing in the state final. At the beginning of the month of April, fans would have called me wild if I had said that. While many were doubting ninth-year Coach Brad Ganor and his 2013 team, captains Dan Rowbottom, Conor Hennessey, Tyler Finkler, and Kyle Pluta tried to keep things together. The Wildcats went into the season thinking that they were a state title contenders, but the start of the season indicated different results in the end. “We got the losing out of the way at the perfect time,” said Coach Brad Ganor in the first week of June, though. Going through a stretch of 22 wins in 24 tries and 13 wins in a row, the season will go down in history for Saint Ignatius Baseball as one of the best ever.

After two losses to Ashland and Amherst, the Wildcats came hungry to win in their first weekend of the season. Going to the inaugural “First Pitch Classic,” Coach Brad Ganor’s team had the opportunity to play at V.A. Memorial Stadium in Chillicothe. A four-run 4th inning against Bishop Watterson and solid pitching from Nick Margevicius surged the Wildcats to their first win of the season. That was only the beginning, as Saint Ignatius surged past Grove City for their second win of the season. They sent 18 hitters to the plate in the 4th inning, which led to 13 runs. By the 10-run mercy rule, Saint Ignatius won the game after five innings were played, 13-2. The following day, the Wildcats went to beautiful Dublin Jerome for a doubleheader with the Celtics. Tom Rolle earned his first win of the season and Shane Skuhrovec came on for the save. Tyler Finkler’s defense also was huge in a 4-3 win in Game One of a doubleheader. After a Game Two loss, the Wildcats were 3-3 after one week of the season.

One of the great opportunities of the season was the chance for the Wildcats to play a good portion of home games at Classic Park, the home of the Lake County Captains. Owner of the Captains and donor Mr. Peter Carfagna welcomed the ‘Cats for the season. After a tough loss to Massillon Jackson, the Wildcats’ home opener with Nordonia was called off and moved. After a game with Archbishop Hoban was postponed, Saint Ignatius took on Canfield. They gave Tom Rolle a big birthday gift with an 18-run performance and an easy win for their ace. Nick Margevicius followed with a 92-pitch complete game in a 5-1 win over Saint Vincent-Saint Mary. But, things would change the following week with a trip to Westlake. The Wildcats scored two in the top of the 1st, but Westlake put up six unanswered throughout to take down Saint Ignatius, 6-2. Standing at 5-5 after the loss to the same team that had beaten the ‘Cats in the playoffs in 2012, there was still uncertainty. The Wildcats would silence doubts against Twinsburg the very next day. It was a slugfest, to say the least. Saint Ignatius fought off the Tigers 18-14, highlighted by an eight-run 6th inning.

Thirteen batters ended up stepping to the plate for Coach Ganor in the decisive sixth and when the dust settled, the ‘Cats were purring to the tune of an 18-11 lead.

With one out and nobody on base, senior designated hitter Kevin Hagen got the eight-run sixth started with a double to center field. Senior third baseman Cole Nieto, who went 4-for-4 on the day and played a solid game at the hot corner, then drove a ball to left field for a base hit that was stung so hard the left fielder couldn’t come up with it cleanly and senior pitcher Matt Lynch, who was pinch-running for Hagen, came around to score the tying run. Promising sophomore catcher Alex Panstares, who doesn’t play like a recent junior varsity call up, lined a first-pitch scorcher to left field that put Saint Ignatius back in front,12-11, and then some ‘Viking Pride” came to the fore. Junior first baseman Joe Khoury, senior center fielder and captain Conor Hennessey and junior left fielder Nick Fabian, who are products of Sts. Joseph and John Elementary School in Strongsville (thus the “Viking Pride” reference), followed with huge run-scoring hits, including a hustle RBI double by Hennessey. Hustle and Hennessey are synonymous.The eight-run barrage also featured an RBI triple by junior right fielder and Miami of Ohio recruit Nick Longo, who is swinging the bat with authority, and another clutch hit by Nieto that produced the ‘Cats’ 18th run.

An outstanding effort by Matt Lynch highlighted the Wildcats’ doubleheader sweep of Mansfield Madison and Midview.  The following week was highlighted by a game under the lights with Avon Lake at Progressive Field. The Wildcats routed Avon Lake behind great performances by Dan Rowbottom, Cole Nieto, and Jordan Bufford. A big victory would occur for Saint Ignatius as the following week began with a comeback win over St. Edward, 6-4. “Matt Lynch, Kyle Pluta and MJ Nara did a phenomenal job in those fifth, sixth and seventh innings, getting out of a few jams,” Coach Ganor said after the game. Nara’s save was simply filthy. The sophomore battery of Nara and Alex Panstares was extremely fun to watch all season, and in my opinion, they were some of the most mature sophomore athletes I have seen. After a win over Kenston, the Ohio Jesuit Tournament arrived at Classic Park. A dramatic Saturday would go the ‘Cats way in the day-cap. Trailing 4-0 heading into the bottom of the 7th, Saint Ignatius was just about ready to drop a loss to Walsh Jesuit, but then things changed and the toughness came out. Cole Nieto, Quillen Austria and Joe Khoury provided the crucial hits, with Austria sending a game-tying, two-run double down the right-field line off a fastball down and away, and Khoury coming up with a single through the right side for the game winner for a 5-4 victory!

Although they fell to Saint Xavier, the Wildcats followed with a strong 7-2 victory over Saint John Jesuit. Tyler Finkler climbed the ladder for a highlight-reel double play, senior third baseman Cole Nieto and junior infielder Quillen Austria set the table in the sixth with text-book bunts, and crafty senior southpaw Tom Rolle (4-0) threw six gritty innings. Looking at the rest of the regular season, Saint Ignatius had a dramatic victory over Canton Central Catholic, 9-8, as they prepared for the postseason. Seeded 2nd in the Strongsville Sectional/District, the Wildcats readied for the most important time of the season.

In their sectional final against Berea, Dan Rowbottom sparked the offense while Quillen Austria fueled the base running. Nick Margevicius dealt a gem, and Saint Ignatius rolled to an 8-0 win. Tom Rolle fired a three-hitter while Conor Hennessey broke the regular-season steals record in a 6-2 District Semifinal victory over Midpark. In Semifinal #1, Normandy upset Brecksville-Broadview Heights, 2-1, and was looking for a program-defying win over Saint Ignatius. Nick Margevicius’ stellar start and a key RBI triple by Dan Rowbottom led the Wildcats just by the Invaders, 2-1. So, for the second straight year, Coach Brad Ganor and his team went to Regionals. In their Regional Semifinal, along with the efforts turned in by Nick Fabian and Tom Rolle, the Wildcats also got some clutch hitting from Tyler Finkler, Joe Khoury and Conor Hennessey, some more solid defense from Khoury at first base and Alex Panstares behind the plate, and a strong sixth inning of relief from right-hander Kyle Pluta. They fought off Avon Lake in a tight one, 3-2.

After the Cleveland Regional Final was plagued by rain and moved to graduation Sunday, Saint Ignatius absolutely demolished Saint Francis, 14-0.

There were many major contributors up and down Saint Ignatius’ lineup, including a three-RBI performance by Nick Fabian and two RBIs each by Tyler Finkler, Dan Rowbottom, Nick Longo, Alex Panstares and Joe Khoury. Senior captains Rowbottom and Finkler both went 3-for-4, Fabian was 3-for-3 and Panstares was 2-for-2 with two triples. The ‘Cats had five triples on the afternoon. That was more than enough support for gifted junior left-hander Nick Margevicius, who yielded three hits, two of which were an infield scratch and a shallow single, in improving to 9-0 on the season. Nick threw 64 pitches, 41 for strikes.

The Wildcats had clinched their first State Final Four berth since 2009, and they would face a team that was in the Final Four for the first time ever, Gahanna Lincoln. Along with Dan Rowbottom’s go-ahead RBI two-run triple, which came with one out in the top of the sixth inning, Saint Ignatius was treated to dig-down-deep efforts by starting pitcher Tom Rolle and relievers Kyle Pluta (winning pitcher) and MJ Nara, a 2-for-3, one RBI performance from Shane Skuhrovec, two hits, an RBI and two stolen bases by Conor Hennessey, a 2-for-4 day by Tyler Finkler and a hit and an RBI by Cole Nieto. The Wildcats fought off the Lions, 7-5, to clinch their first State Final berth since 2008!

Although the State Championship did not go the way the Wildcats wanted it to (7-1 loss to now seven-time state champion Moeller), Coach Brad Ganor had nothing but good things to say about his team. “You will go down as one of the greatest teams in program history. You made me so proud, and you represented your alma mater in the finest way possible.”

From a guy who stepped up with a smile on his face like Bennett Kinzel to superstar Dan Rowbottom, this team exemplified the saying “knowing your role,” as they fought. Seniors like Kevin Hagen and Jagger Bruck guided the younger guys along in a season to remember. What a group, a group that I’ll never forget.

2014 Captains: Nick Fabian and Nick Margevicius, with a third captain to be announced at a later date.